Let light shine out of darkness

For it is the God who said, “Let light shine out of darkness,” who has shone in our hearts to give the light of the knowledge of the glory of God in the face of Jesus Christ. — 2 Corinthians 4:6

On the afternoon of June 5, 2014, a young man with a shotgun assaulted students outside and inside Seattle Pacific University’s Otto Miller Hall. The gunman, who had no connection to SPU, injured three students before Jon Meis, a senior electrical engineering major, disarmed him. Other students helped hold the man down, and students and SPU security officers assisted the victims until the Seattle police arrived a few minutes later.

The injured students were rushed to Harborview Medical Center. Thomas Fowler, a senior physics major, and Sarah Williams, a sophomore sociology major, were treated and eventually released from the hospital. Another student, Paul Lee, a 19-year-old freshman from Beaverton, Oregon, died that day.

By the time campus lockdown was lifted, around 5 p.m., students, faculty, and staff had begun to gather in small groups to pray and care for those around them. At a 7 p.m. prayer service in First Free Methodist Church, the SPU community began a journey together through grief, hope, and the promise of healing.

Also:
The Cry of the Heart
Paul Lee’s Memory Dances On

The Rise Above Fund

Many people asked how they could offer financial support to Seattle Pacific University following the events of June 5. In response, the University created the Rise Above Fund to support those students directly affected and to meet special needs around the SPU community.

Messages of support arrived each day at a homemade memorial, while student-made banners and signs emerged around campus. Photos by Luke Rutan and Jane Hur.

The SPU community worshipped together following the incident. Associate Professor of Music Stephen Newby led the singing of “How Firm a Foundation” in the June 6 service. Photos by Luke Rutan.

A Seattle Times headline reported SPU’s response to the shooting. “We’re allowing ourselves to not really have answers. … What I’m seeing most is the desire to really be together, to find each other, to look after each other. To both give and receive the love of Christ.” Megan Risley Wildhood ’10, Seattle Pacific Seminary student, quoted in the June 8 Seattle Times. Photo by Dale Kegley. 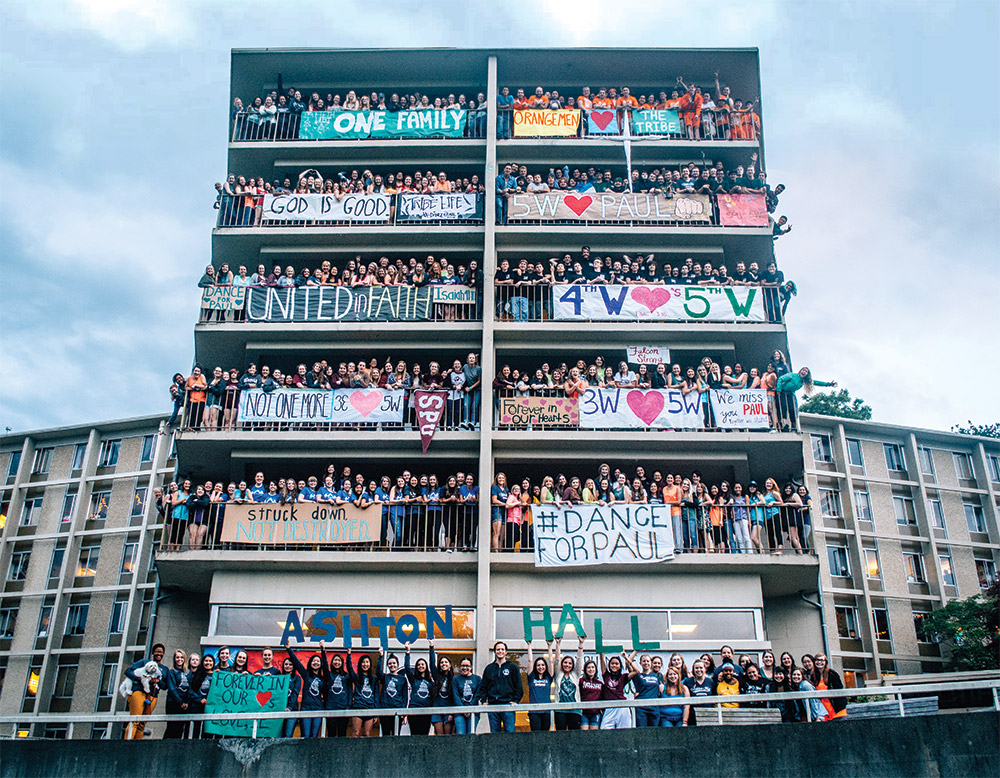 Students who live in Ashton Hall created signs of support in remembrance of Paul Lee, who lived on Fifth West Ashton. Photo by Mary Campbell.

Groups of students could be seen praying together across campus. Photo by Luke Rutan.

SPU assisted students, faculty, and staff in a variety of ways. Counseling and psychological first aid was coordinated by the Student Counseling Center in partnership with faculty from the School of Psychology, Family, and Community, and an outside crisis counselor was brought in to help as well. Other support included the Art Center offering space for creating art as a way to respond. Pieces of art were delivered as gifts for families directly affected (see back cover). Photo by Lynn Anselmi.

Students from the University of California, Santa Barbara, sent a message of support for SPU. Photo courtesy of UCSB via Facebook.

Up Next: A Future With Hope – Commencement 2014