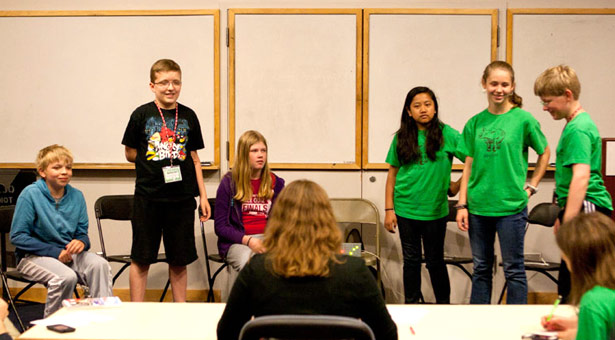 The week of June 25–30, Seattle Pacific University hosted the 2012 Free Methodist Bible Quiz National Finals. More than 500 young people and families from around the country were on campus for the event.

This was not your mother’s Bible quiz. First, the questions were seriously hard. For example: “According to Peter, bold and arrogant men are not afraid to do what?”

If you answered “slander celestial beings,” you were right. But to get the points, you also had to be the first to jump out of your chair. If you jumped before the question was finished (and most contestants do), you must finish the question correctly before you can answer it. You have 20 seconds to complete each task.

Another question: “According to Hebrews, when the Holy Spirit testifies about sacrifices, first he says what?“ Answer: “‘This is the covenant I will make with them after that time,’ says the Lord. “I will put my laws in their hearts, and I will write them on their minds.’” At least three contestants were out of their seats by the time the quizmaster got to “Holy Spirit.” Try completing that question. But someone did.

This year’s event drew 88 teams of sixth graders through high school seniors, from as far away as St. Petersburg, Florida — teams from towns with names like Gowanda, New York; Willamina, Oregon; and Hookstown, Pennsylvania. Most were three-person teams, but one team from Lawrence, Kansas, comprised two sixth graders and a big rubber ducky sporting a gold crown. It’s name? Melquizaduck.

Many of the participants had memorized all of Hebrews, and all of 1 and 2 Peter — a total of 469 verses, or an average of 67 verses per month. Some rattled them off so fast, scarcely taking a breath, that they could have been saying every other word, and no one would have known the difference, except, presumably, the quizmaster.

Bible Quizzing is a ministry of the Free Methodist Church. Its mission is “to instill biblical truths in the hearts of teens, establish them in their faith, and prepare them for Christian service through the systematic study, meaningful application, and memorization of the Word of God.”

Partway through the hotly contested individual finals in the sanctuary of First Free Methodist Church, Ruth Allard, older sister of two contestants whispered to her father, “This is hardcore.” That pretty much summed it up.

For the results of the 2012 National Finals, visit fmquizzing.org/12finals/.