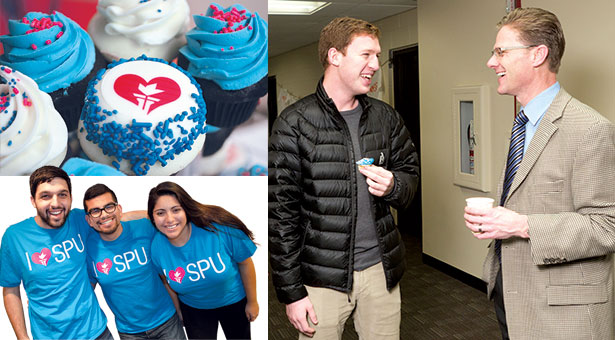 Kenneth Jaimes ’13 had a long list of reasons prepared to tell his fellow classmates why they should give to SPU. But as soon as he told them the money raised during I Love SPU Week would support students who had exhausted other means of financial assistance, he says he saw “a change in people’s body language.”

“It becomes personal,” he says. Sophomore Diana Tam gave “a couple dollars and a ziplock bag with coins inside” the moment she heard that I Love SPU Week funds supported other students in need.

“I went back to my dorm and got a couple other girls from my floor to participate with me,” she adds.

Jaimes and other student volunteers are part of Advancement Core, a new group launched during
the 2012–13 school year, in partnership with SPU’s Alumni and Development offices. The Advancement Core team planned I Love SPU Week, February 25–28, 2013, as the first Student
Philanthropy and Engagement event. More than 10 percent of students participated, with 375
student donors joining in to raise $3,275. Student gifts were doubled by a matching gift from a
former SPU trustee and his wife, Don and Melissa Nielsen — raising the total to $6,550.