Finding Communion in a Broken World 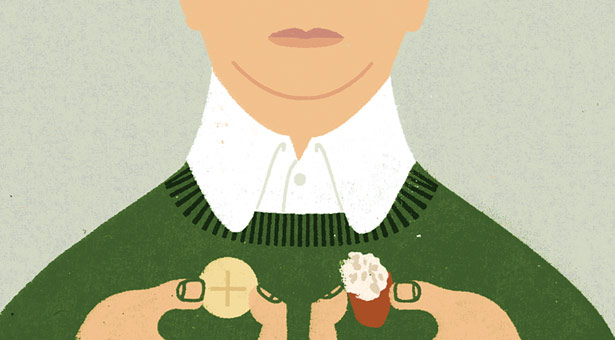 The last time I took Communion with my brother Ben, we walked down the aisle at my parents' evangelical church as the worship band played soft praise choruses. We both took a chunk of bread, dipped it in grape juice, and gulped it down before heading back to our seats.

Ben was diagnosed with celiac disease at age 11 in a routine screening at the juvenile diabetes clinic he'd been going to since age 3. The doctors told him that in the biopsy, his intestines looked stressed-out, meaning he was at risk for unpleasant complications, such as colon cancer.

But there was a cure.

The cure, the only known cure, is a gluten-free diet.

If you are on a gluten-free diet, life is just a little easier if you avoid certain foods — pizza, pasta, and cookies — and certain activities — birthday parties, office coffee-and-donut breaks, and Communion.

The gluten-free diet has gotten easier over the past decade, as more Americans are diagnosed with celiac disease — and as it's become a bit of a healthy lifestyle trend. And Ben sticks to his gluten-free diet now, though, oddly, part of his job at the fancy restaurant where he works as a cook is making handmade pasta.

But when he was in high school — well, he was a teenager. He dyed his hair pink and got tattoos. He ignored adults' — including doctors' — advice. He snuck pizza at the school cafeteria. He never checked labels for “modified food starch” or “hydrolyzed wheat protein.” He just wanted to do what normal people did.

Eventually Ben started to feel side effects. He developed a painful rash on his elbows, and when he ate wheat, he felt his throat closing up. He's stuck to the diet since then, but that hasn't changed the
fact that celiac disease can make him feel like an outsider. When I ask Ben why he avoided the rice
cracker at Communion, he says he felt uncomfortable stepping out of line. Even though the church was doing its best to be inclusive, it didn't seem to fit the ritual, and he didn't want to feel different.

The bread I've partaken of over the years has taken a variety of forms — papier-mâché-flavored squares in a silver tray; stale oyster crackers on a plastic plate; a giant wad of fresh-baked multigrain bread that took 10 minutes to chew, even when soaked in juice. I've waited out an awkward pause in the music while the pianist ducked her head for a wafer. I've listened to a pastor struggle to explain “intinction.” I've passed a bottle of hand sanitizer around before passing the loaf and then tasted the sanitizer's chemical tang on the bread.

Communion can be messy, awkward, and confusing, but I keep coming back because I need it, even if I can't quite explain why.

But celiac disease forces churches to choose between unity and inclusiveness. Either we all partake of the same body, or we invite everyone to the table. We may sing “Let us break bread together on our knees,” but we can't actually do it, because Ben's elbows might break out in a painful rash.

The other problem I run into is that Communion simply means different things to different Christians. As much as I believe we leave our differences behind when we come to the table, we Protestant, Catholic, and Orthodox Christians will probably never all share a table this side of God's heavenly feast.

But there are at least some solutions to the celiac quandary. What if churches just served rice
crackers to everybody? Rice crackers may taste like Styrofoam packing peanuts, but I'd consider them a blessing if they let me share Communion with my brother.

Think about those little thimbles of grape juice. Until the temperance movement and Prohibition, Protestants drank wine at Communion. Now, at least one reason many churches continue to serve grape juice is to avoid pushing recovering alcoholics off the wagon — to avoid making them break the fast they must keep to live a better life. Churches could help people with celiac disease keep their fast in a similar way.

Perhaps there is no way to smooth over the awkward truth. Our bodies are broken, diseased, and hurting. Some of us have bodies that can't accept the physical substance of Christ's bread of life — in this life. And yet, it is in this human life, among these sick and achy bodies, that Christ came to join us, to eat with us, to break this bread with calloused human hands.

Hannah Notess is managing editor of Response. This essay was adapted from The Spirit of Food: 34 Writers on Feasting and Fasting Toward God (Cascade Books, 2010). Used by permission of Wipf and Stock Publishers, wipfandstock.com.