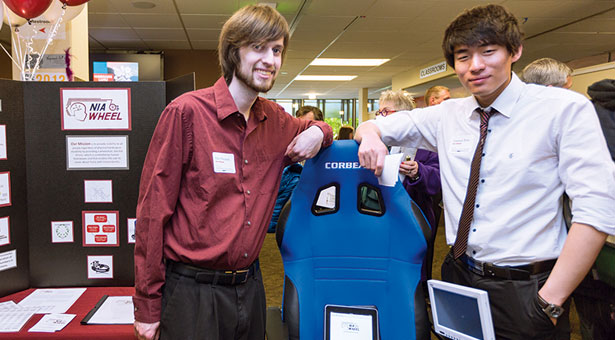 The first time that senior Clarence Rieu watched the NIA wheelchair move, he was thinking, “Wow, anything can happen.” He was also thinking “forward, forward, forward.”

It was Rieu’s brain waves that propelled the wheelchair prototype, which he and his teammates built from scratch for their junior engineering design project in 2011–12. Rieu, with team Sergey
Kisel ’13, Eric Olmsted ’13, Kristian Rubesh ’13, and Jesse Hoffman ’13 continued to work on the project this year. Rieu and Olmsted joined business majors Aryn Schatz ’13 and Jessica Way ’13 to win SPU’s Social Venture Plan Competition on April 17. The engineering students competed in the Cornell Cup this May, and the team also took home two $5,000 prizes at the University of Washington’s Business Plan Competition — where they were the only team in the final round comprised entirely of undergraduate students, notes faculty advisor Kevin Bolding, director of engineering and computer science programs.

The team of both mechanical and electrical engineering majors hopes the chair will improve life for quadriplegics and amputees. It uses a brainwave sensor that wirelessly communicates with an on-board processor, which moves the chair.