Add your own memories of Emerita Professor of Teacher Education Vivian Larson. 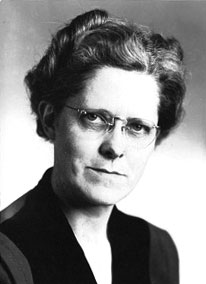 This beloved professor came to Seattle Pacific in 1940. She held many different positions in her 37-year tenure, including professor of education, director of teacher placement, and director of elementary student teaching. After being granted emerita status in 1973, she continued working in the School of Education as coordinator of student placement services.

According to Seattle Pacific University: A Growing Vision by Donald McNichols, “Her knowledge, her deep interest in the student, and her complete dedication to the College while serving the interests of the public schools made the name ‘Miss Larson’ synonymous with teacher education throughout the state of Washington.”

A retirement tribute from the Board of Trustees stated that “thousands of Seattle Pacific College graduates have been launched into successful and useful teaching careers through her inspired teaching, counsel, and placement services.” Read a 2009 Footnote published when she was 100 years old.

When we printed a picture of her in the Spring 2012 issue of Response, which focused on education, many alumni wrote to identify her, and quite a few shared their memories of her. Here are some of the things they had to say:

She was a wonderful person and cared for students.
Bob Porter ’51 and Hazel Green Porter ’53

She influenced me and countless others.
F. Ruth Stamper ’61

It is Vivian Larson. She was my seventh and eighth grade teacher. That is, she supervised the student teachers for those two grades, and I was one of the students. One of the great things I remember is that she read aloud to us every Friday afternoon. When I was 12 I thought she was old, but she was only 22 years older than I.
Joyce Wilder-Jones ’50

She was a good friend of my mom, Lola Pettengill.
Laurie Pettengill James ’80
SPU Graduate Student

I remember her mentoring my mother as she went back for her teaching certificate in the late 1950s.
Lynn Creed Burwell ’67

She was very dedicated and ever so helpful to those of us in the education department. I went to school at night, weekends and during the summer for 15 years at SPC while I was teaching school. I have wonderful memories of my classes and instructors in those years starting in the ’60s.
Dixie Young M.A. ’67

She was my supervising teacher when I was at SPU. I so respected her. Vivian taught as well. She was a wonderful woman.
Barb Lawson ’65

The picture is of Vivian Larson, who was not only a teacher of teachers, she was also my Bluebird and maybe Campfire Girls leader. Possibly also a Sunday School teacher of mine at First Free Methodist – hard to remember, but she was there during all of those years.
Carolyn Rosser Watson ’68

The photo is of Vivian Larson. She was our next-door neighbor.
John Dietzman ’61

The woman pictured in the latest issue of response credited with teaching thousands of teachers is Vivian Larson. I agree she was superior at teaching teachers.
Rich Allen ’60

I remember her as quietly self-assured and very supportive of us as her student teachers. It was a job I aspired to, and ultimately I followed in her footsteps to become director of student teaching at Whitworth University.
Doris Krause Liebert, ’56

My mother, Evelyn Youngren, worked with her and was a good friend of hers!
Meredith Youngren Flaming ’67

She was part of my elementary teacher training. I went on to teach in the Edmonds School District for 34 years, retired, then continued to substitute part time.
Diane Durall ’71

She was the best.
Barbara Miller Jefferries ’53

She was wonderful and directed each of us in the right direction. I taught 34 years, mostly in grade 1. I retired at 75 and am still doing a lot of substitute teaching.
Wilda Johnson Thomas ’57

I was privileged not only to know Vivian and have her as a professor, but to live with her my last year of college. Although I have lived back in the Midwest for many years, I got to see Vivian once in a while when I was in the Pacific Northwest. When she turned 100, I sent her flowers. I guess many people responded to the news of her 100th birthday. She was astute, caring, and a wonderful Christian. I will never forget that Vivian pulled me aside after she had observed me working with second grade students and tried to convince me to change to an elementary education endorsement instead of a secondary education endorsement. She didn’t convince me, but I ended up in special education administration and had many experiences in elementary classrooms, as well as my teaching French, English, speech, and drama at the secondary level. I have worked as an adjunct professor for five universities the last 10 years (just three currently). This gives me a chance to use the skills that Vivian Larson evidently saw in me ever so long ago! She was an SPU treasure!
Faith Lambertson Huitt ’67

I have remembered her often as I worked in the classroom. She gave us so many practical ideas of how to manage our classrooms and how to reach out to young people. In fact, I consider her the best that I ever encountered in both undergraduate and graduate schools. I have retired after 43 years teaching high school English. She taught me how to find the real teacher in me. I have tried to pass that on to my students.
Shirley John Rogers ’51

She was always available, helpful and knowledgeable. And a good friend.
Doug Tullar ’50 and Jan John Tullar ’67

She sat with clipboard and poised pencil to evaluate me during my student teaching days. Many thanks
Jim Lowe ’57

During the summer of 1950 I worked for this quiet, intelligent lady in the Education Office at SPU. It was the beginning of my career as an office worker that eventually led to my career in the insurance industry. My brother Royal Johnson ’49 and his wife Alberta White made a career as teachers in Kelso, Washington after graduating from SPU in 1950. Thanks to the program Professor Larson established they were able to influence the lives of many young people. Thank you, Vivian Larson.
Hulda Johnson Frank ’54

Seeing Vivian Larson's picture on page 52 of the exciting issue of Spring 2012 Response brought back so many memories. Miss Larson took a personal interest in each student in the Education Department when she was the director in the ’50s. I remember when she called me to come to her office to encourage me to take a teaching position I'd been offered.
Evogene Atkinson Stephens '58

A fine teacher and mentor.

She was my mothers eight grade teacher. Even at age 83, my mom still has vivid memories of her and the influence she had on her life.

Not only do I remember Vivian Larson’s face (though it was a bit older when she was head of the education department at SPC in the early ’60s), but I also remember her beautiful handwriting with her signature.

Do you have a memory to share about Vivian Larson? Tell us here, and read what others have to say on this moderated bulletin board.