Saw any of these movies?

Share your opinion, and see what others are saying.

What happens to children who lack responsible, faithful fathers? Do they become screenwriters? If you’ve been going to the movies lately, you might begin to wonder.

Just take a look at some of 2012’s most talked about movies, and you’ll find story after story about troubled young men and women, the parents who have failed them, and the grownups who may (or may not) step into the void. 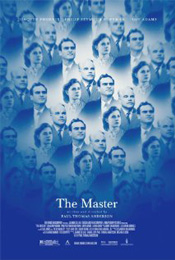 Moviegoers know that if they buy tickets to a Paul Thomas Anderson movie, they’re going to see something extraordinary. They may find it revelatory, challenging, aggravating, or even offensive. But they’ll probably agree that Anderson’s movies aren’t like anybody else’s.

The Master is Anderson’s most divisive movie so far. It follows Freddie Quell (Joaquin Phoenix), a soldier who returns from war as a haunted, lust-driven, explosive alcoholic and proceeds to fall under the spell of Lancaster Dodd (Philip Seymour Hoffman), an egomaniacal philosopher and cult-leader.

Dodd, his character inspired by Scientology-founder L. Ron Hubbard, is both charismatic and devious. He is quick to exploit Freddie’s need for a father, a counselor, an employer, and a guide. And Freddie, in his desire to belong and to be loved, is willing to play the role of Dodd’s “guinea pig.”

While the extremes to which both men go in their destructive appetites make The Master an extremely unpleasant movie to watch at times, it’s difficult to deny that Anderson is one of the most powerful American filmmakers working today. And he has drawn incredible performances from his leading men, Phoenix and Hoffman.

While the story takes distressing turns, it exposes the vulnerability of young men who are betrayed by their fathers and their leaders. And it shows us what can happen when their need for a guide bring them under the influence of unreliable masters. It's a movie that recalls one of Bob Dylan's best-known lyrics: “You're gonna have to serve somebody / It may be the devil, or it may be the Lord / But you're gonna have to serve somebody.”

Everyone has a master, and the masters we choose will either increase our joy and freedom or exploit us for their own purposes. 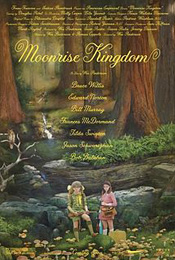 When the coonskin-capped Sam Shakusky (Jared Gilman), an orphan who has served with the Khaki Scouts, runs away with a pretty girl named Suzie Bishop (Kara Hayward), he inspires a search party made up of scouts, Suzie’s parents, and a policeman.

It sounds like the setup for a story celebrating rebellion and irresponsibility. But the sad thing about this Romeo and Juliet story is that the adults are the people who have been irresponsible. Foster parents have given up on Sam, Suzie’s parents have given her reason to be distrustful and cynical, and the only lawman in sight is suffering a depression that’s likely to take things from bad to worse.

Ultimately, the relationship between these serious-minded teens is a better picture of selfless love than anything else in this New England neighborhood.

Wes Anderson’s movies often portray communities in which husbands, wives, parents, children, civil servants, and miscreants all fail one another and fumble toward some kind of grace. But Moonrise Kingdom may be his funniest, most poignant movie so far, illustrating that humankind’s ability to weather storms has everything to do with how willing we are to model tough, generous, and faithful love for one another in hard times.

And take note: This is the first Anderson film in which a church plays a central part in reconciling a divided community.

Beasts of the Southern Wild 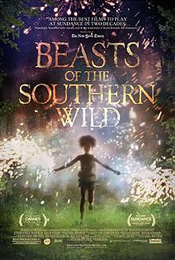 “Hushpuppy” is the nickname of a 6-year-old Louisiana girl (Quvenzhané Wallis) growing up in poverty in a bayou neighborhood called “The Bathtub.” In this disorderly and desperate state, she is forced to become self-reliant. Her mother left a long time ago, and her father — a mercurial, ailing alcoholic (Dwight Henry) — careens between states of tenderness and explosive rage.

Beasts of the Southern Wild has been hailed as a landmark work of independent filmmaking. It immerses us in communities that exist in the real world but somehow avoid acknowledgment in American art and entertainment.

We follow Hushpuppy through the terror of Hurricane Katrina, through the subsequent terrors of aid-worker intervention, and through the hardships of living with an untrustworthy and ailing father. Her only comforts lie in the company of generous neighbors and the maternal embrace of a stranger. (Strangely, this version of Louisiana seems untouched by Christianity.)

Deprive human beings of religion, and they will find a vocabulary of faith all their own. Through Hushpuppy’s interior monologue, we see that she’s assembling a unique worldview. She’s heard about global warming, and so she imagines that the polar ice caps are melting and releasing long-imprisoned monsters that seem to signify the end of the world.

But Hushpuppy’s community of ferociously independent loners helps her prepare for, endure, and recover from the storm by encouraging her to survive with beast-like aggression. “You’re the man!” becomes the battle cry in a scene that feels like Hushpuppy’s initiation into the adult world. And the film builds toward a conclusion in which Hushpuppy will look something like a leader of the future — a girl who, lacking experience with a mother’s tenderness, marches on like, well, “the Man.”

Is this a hopeful ending? For those who find self-reliance to be essential for survival, perhaps. For those who believe we need more than brute strength and a strong will to make a better world, the conclusion may be unsatisfying. 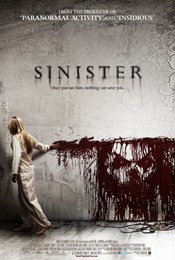 If you don’t like horror movies, steer clear of Sinister, the new film from director Scott Derrickson (The Exorcism of Emily Rose, which was reviewed in Response OnScreen in 2005). It’s scary … and bloody.

But don’t write it off as another bloody big-screen nightmare. Derrickson has some serious concerns in mind as he tells this story about a man whose compulsion to write a best-seller leads to disrespect for his wife and children. Ellison Oswalt (Ethan Hawke), dreaming of writing a true-crime book as big and influential as Truman Capote’s In Cold Blood, has moved his family into a house with troubling history, one that he is careful to keep secret. Will living on a crime scene give him the inspiration he needs?

I’ll spare you the gory details (and they are very gory). Suffice it to say that is a cautionary tale, one concerned with a father’s responsibility and the wages of sin. Here’s a man who fails to be vigilant, allowing malevolent influences to slip past him while he focuses on what he thinks is more important than his children.

The Kid With a Bike 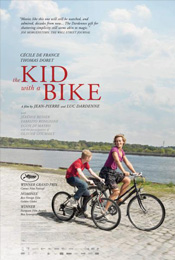 Just as they did with their movie The Son (Le Fils), Jean-Pierre and Luc Dardenne have delivered another critically acclaimed film about a lost boy whose future depends on the kindness of strangers.

In The Kid With a Bike, 11-year-old Cyril (Thomas Dorset) fights to find the father who abandoned him. Charging around the streets of Liege, Belgium, on his bicycle, he is determined to chase down the family that is rightfully his. But as his father (Jérémie Renier) won't have anything to do with him, his best chance for a future is in the company of a compassionate hairdresser named Samantha (Cécile de France), who is mysteriously compelled to save him from a life on the streets.

With obvious nods to classic films about children in distress including — Bicycle Thieves, The Red Balloon, and The 400 Blows — The Kid With a Bike is able to portray grace and redemption without ever stooping to mere sentimentality. It’s a rough, riveting film. 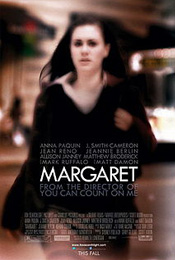 One of the most heavily discussed films among film critics this year has been Margaret, a movie directed by Ken Lonergan back in 2005 that most Americans had no chance to see until this year. Critics’ enthusiasm had a lot to do with the film’s eventual (and overdue) limited release, but even big-name stars like Anna Paquin, Matt Damon, and Mark Ruffalo have failed to win it the audience it deserves.

Now that the film is out on DVD and blu-ray, moviegoers everywhere have a chance to see one of the most ambitious films ever made about an American teenager.

Lisa Cohen (Paquin) is a lonely and anxious girl in a New York City that is still suffering from post-traumatic stress disorder. The shadow of 9/11 darkens this film, portraying a city on edge, in which everybody has strong opinions about who is at fault, but nobody takes responsibility for anything they’ve done.

Like so many teenagers, Lisa clearly believes that the world revolves around her. But in her manic narcissism and her over-dramatization of everything, she’s mirroring what she’s witnessed in the adult world. Her father is just a voice on a telephone, lacking resolve and integrity. Her mother is a Broadway diva pursuing exposure and recognition. Her teachers (Matt Damon and Matthew Broderick — yes, Ferris Bueller is a teacher now) are quick to assert their authority, but they’re also quick to give in to advances from attractive female students.

And when a devastating accident leaves Lisa in desperate need of guidance, she spirals downward into loneliness, guilt, and a desperate need for confession. Instead, she caught between adults seeking to exploit one another in the name of “justice.”

It’s hard to ignore Margaret’s implications: This is an America in which everyone is shouting at the same time, nobody listens, the end always justifies the means, and it's always the other guy’s fault. Blame is a tricky business when everyone is failing everyone.

Margaret’s theatrical cut made it clear that editors were making the best movie they could with footage from an unfinished project. But it’s still worth watching and discussing. Even better, the blu-ray/DVD combo release contains an extended cut for those who want to see even more of Lonergan's ambitious vision.

So … if the movie’s main character is Lisa, who's Margaret? You'll have to see for yourself.

Have you seen these films or another about fathers or father figures? Tell us what you thought about them, and read what others have to say on this moderated bulletin board.

Jeff, Thanks for this piece. I'd noticed a similar trend in these stories. You ask if these people lacking responsible fathers grow up to be come screenwriters. I think very possibly yes. I have a belief that many writers are telling the story they needed growing up. Personally, I'm working on a project with a similar theme and it hit me at 4 a.m. and woke me from my sleep - "I'm telling the story I needed growing up." Strange blend of freedom and responsibility when you realize that. Hopefully the good writers will always tell their stories with dignity and respect to their characters and audience. Thanks for sharing this with us.


Back to the top