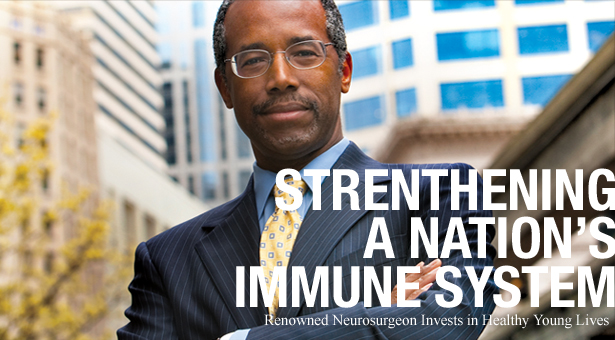 Though pediatric brain surgeon Benjamin Carson has performed groundbreaking operations, written four best-selling books, garnered more than 50 honorary doctorates, and received the Presidential Medal of Freedom, he is more apt to tell you about some of the 350 or so surgical procedures he performs yearly that don't make the news. These might include untangling the defective spinal cord of a 7-year-old or protecting a child with a skull anomaly who might otherwise have bled to death.

And it was Carson's passion to inspire, motivate, and wrestle with the knotty challenges of health care in America that brought him to speak to the 14th annual Seattle Pacific University Downtown Business Breakfast on April 6, 2010. More than 1,200 business and community leaders and health care professionals converged on Seattle's Westin Hotel to hear from a man who CNN and Time magazine named one of the 20 foremost physicians and scientists in the nation. Later, Carson spoke on campus to another packed gathering of students, faculty, staff, and visitors from the surrounding community.

Like many young children, Carson dreamed of becoming a doctor. But while some child dreamers meet indulgent smiles at their audacious career choices, he met with a force of nature: his mother.

Sonya Carson, a third-grade dropout and single mother who worked three jobs to make ends meet, told her son, "You can be anything you want to be in this life." Poverty was no excuse. To be successful, she said, Ben would need to work hard and to rely on God.

When Ben and his brother, Curtis, slipped further and further behind in school, their mother insisted they turn off the television, finish their homework, read two library books a week, and provide her with written reports on what they'd read. Unknown to them, her limited education meant that she struggled to read what they wrote.

One of his most celebrated cases came in 1987 when Carson operated for 22 hours on the Binder babies, male twins joined at the back of the head. Known as craniopagal joining, it is one of the rarest types of joining in conjoined twins.

Within a few weeks of the start of Mother Carson's remedy, Ben Carson was no longer labeled the class "dummy" by fellow students. He knew the answers to his teachers' questions, and after a year he was at the top of his class. Realizing for the first time his potential and what it took to become a physician, Carson became hungry for knowledge.

He graduated from high school with honors, attended Yale University, and earned a degree in psychology. At the Medical School of the University of Michigan, he switched from psychiatry to neurosurgery, where his exceptional hand-eye coordination and three-dimensional reasoning skills made him an outstanding surgeon. By the age of 33, he was named the chief of pediatric neurosurgery at The Johns Hopkins Hospital, the youngest U.S. doctor ever to hold the position. Today, he is director of the Division of Pediatric Neurosurgery and co-director of The Johns Hopkins Craniofacial Center.

One of his most celebrated cases came in 1987 when Carson operated for 22 hours on the Binder babies, male twins joined at the back of the head. Known as craniopagal joining, it is one of the rarest types of joining in conjoined twins. Both boys survived the world's first and only successful separation of occipital craniopagus twins.

Education, says the famed surgeon and father of three sons, is liberation. The Carson Scholars Fund, of which he is president and co-founder, recognizes young people of all backgrounds for exceptional academic and humanitarian accomplishments. The Ben Carson Reading Project encourages the love of reading, establishing reading rooms in elementary and middle schools across America. The rooms are filled with hundreds of books that encourage children to increase their potential through the written word.

Carson spoke with Response about deep faith, strong convictions, and the mindset required when it really is brain surgery: A Conversation With Ben Carson.