The Faith at Work Movement

By John Terrill, Director of the Center for Integrity in Business in SPU's School of Business and Economics

The integrated Christian life is a core principle in the Scriptures. David Miller notes in his book, God at Work: The History and Promise of the Faith at Work Movement (Oxford University Press, 2007) that the Hebrew word avodah bundles “work,” “worship,” and “service” in a single term. No aspect of life is holier or more important than another.

But so-called “secular” professions have often been devalued by the historical church in the hierarchy of meaningful occupations. The faith at work movement — a loose global network of scholars, clergy, students, and marketplace leaders — has sought to reverse this trend by encouraging and equipping Christians to see their work as part of God’s purposes in and for the world.

It’s hard to pinpoint when the current faith at work movement (also known as marketplace ministry, workplace ministry, and ministry in daily life) originated. In the 1890s–1920s, the “social gospel” gave birth to the profession of social work, and supported and affirmed workers in their occupations. In the 1930–40s, pastors, lay leaders, and Christian scholars began calling for the church to respond to a rising tide of economic and socio-political devastation. Other seeds were planted during the 1960–70s as the long, hard push for civil rights stirred in churches.

The 1980s brought exponential growth in the movement, with a greater emphasis on supporting individual Christians in their work. This growth accelerated and broadened in the 1990s, and important initiatives formed among mainline Protestants, Roman Catholics, and Evangelicals cooperating to explore and affirm the value of work.

The breadth and depth of organizations and resources addressing faith at work concerns expanded in the 2000s. Today, hundreds of highly effective faith at work organizations serve individual Christians, companies, denominations, parachurch organizations, colleges and universities, and a broad spectrum of churches. Doctoral dissertations have been written on faith at work topics, with some universities and seminaries developing workplace theology programs and research interests.

Closer to home, Seattle Pacific University’s School of Business and Economics has earned an international reputation for exploring a distinctly Christian approach to business, while its industrial/organizational psychology graduate programs in the School of Psychology, Family, and Community have brought strong research commitments to the theme of faithful vocation. The School of Theology collaborates with various academic areas to develop programs for students and pastors that reinforce work as a high calling.

Jeff Van Duzer (dean of SBE), Al Erisman (SPU executive-in-residence), Barry Rowan (former SPU board member), Uli Chi (SPU Center for Integrity in Business executive committee chair), Bryce Nelson (former University librarian), Tim Dearborn (former dean of the chapel), David Gill (SBE adjunct faculty member and director of Gordon-Conwell's Mockler Center for Faith and Ethics in the Workplace), Will Messenger (SBE guest lecturer and executive editor of the Theology of Work Project), as well as Richard Mouw and Katherine Leary Alsdorf (featured in this issue), are just a few of the faculty, staff, and friends of SPU who have had an influence through their personal and scholarly commitments to the movement. 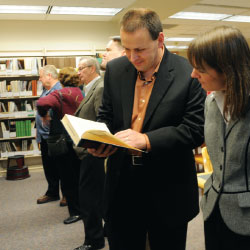 The Work and Faith Collection, coordinated by librarian Cindy Strong, was dedicated (pictured) as a permanent part of the SPU Library in 2009.

The contributions of Pete Hammond deserve special mention. After retiring from decades of service at InterVarsity Christian Fellowship, Hammond became a student mentor at SBE. Just before his death in 2008, Pete dedicated his 1,700-volume work and faith collection to SPU. As a lifetime champion, organizer, and historian of wholelife discipleship concerns, Hammond's library explored topics of workplace theology, economics, business, and the professions. It has recently been endowed, and now represents one of the most comprehensive collections of its kind anywhere.

We can be proud that SPU has played a role in equipping men and women in diverse professional fields — across all ages and ethnicities, and in all reaches of the globe — to see all of life, including work, as sacred activity.