Rick was honored, along with Young Alumna of the Year Kristen Eddings Tetteh ’06 and Medallion Award Winners, at the annual Homecoming Luncheon in February 2015.

Alumnus of the Year: Pastor on the Street 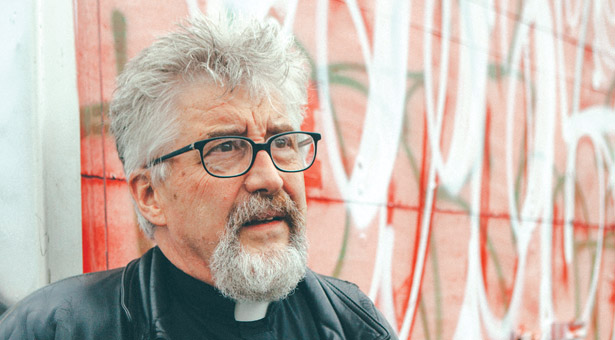 During his 20 years as executive director of Operation Nightwatch, Rick Reynolds has helped the organization purchase property on the edge of the International District, add senior housing, and increase the operating budget from $70,000 to almost $1 million. His favorite part of his job is connecting with people. “I feel nothing but great joy in my work,” he says.

Christmas break of his senior year at Seattle Pacific College stretched on and on for Rick Reynolds ’75. Every time he thought of returning to student teach at West Queen Anne Elementary, dread washed over him. He was uncomfortable maintaining discipline in a classroom full of sixth-graders.

“I probably could have survived,” he says. “But I wouldn’t have liked it.”

Right before classes began, Rick went to an administrator in Seattle Pacific’s School of Education and said, “I’m in knots. I can’t do this. I hate teaching, and I don’t want to waste my time or other people’s time.”

The department struggled to know what to do with his credits, since student teaching was a two-quarter block. “I limped out of there feeling really defeated,” he says, adding that he graduated a quarter late and switched his major to sociology.

While Rick volunteered with youth in juvenile detention as part of his SPC experience, he didn’t yet know that urban involvement was part of his career path. Later that summer, he joined a group of people from his church singing old gospel standards at an inner-city nursing home, and Rick experienced “a powerful sense of call.”

He’s been in urban ministry ever since — recently celebrating 20 years as the executive director of Operation Nightwatch, an interdenominational Christian ministry serving people experiencing poverty and homelessness. Rick, Seattle Pacific University’s 2015 Alumnus of the Year, has served the organization in some capacity for 30 years.

At Nightwatch, you can find Rick, an ordained Free Methodist minister, wearing running shoes, coffee-stained jeans, a black shirt, and a clerical collar. He may be at his desk working on a strategic plan for the organization, or sipping coffee with some of the 24 seniors who live in low-income housing upstairs. Nightwatch also maintains a dispatch center that feeds and finds nightly shelter for people without a place to sleep. Rick drives them to appointments, holds hands and prays with prostitutes and johns, delivers socks to the residents at Tent City 3, and invites people to his home for Christmas dinner. Once a week, his congregation is the patrons of Seattle’s bars, where he’ll stay until midnight to listen to and intercede for people.

“It’s really a ministry of presence,” says Owen Sallee ’99, MEd ’06, SPU’s coordinator for global and urban involvement. Owen says that Rick has served as a mentor to him for 12 years and credits Rick with being a “persistent, friendly voice” that urged SPU to host Tent City 3 in the winter of 2012, and again this winter.

“Nightwatch maximizes the resources of our whole community by ensuring that when there is a spot for someone to sleep indoors at night, that spot is filled,” Alison says. “Rick can speak clearly to the fact that we have thousands of people outside after the shelters are full. That’s a powerful message that everyone — not just the City Council — needs to hear.”

Rick also tells the stories of his marginalized friends in university classrooms, churches, and at seattlehomeless.blogspot.com. One of his favorites is about Ronnie, who “was about the homeliest, smelliest, loudest homeless guy at Nightwatch.” One night, with a captive dispatch center audience, Ronnie asked, “Ain’t I beautiful?”

“Then hug me,” Ronnie said.

Rick extended his arm for a safe side hug. Ronnie twisted and flung his arms around Rick, hunching his 6-foot-2-inch frame over the pastor. Stubble pressed into Rick’s face, and he smelled the stench of body odor, cheap booze, and cigarettes. Ronnie planted a kiss on Rick’s cheek, and then left.

“I was patting myself on the back about the good thing I had done,” Rick says. Then he sensed a voice asking him, “Who was the ugly one in that situation?” Rick realized that it was him, wanting to “keep Ronnie at arms-length. He on the other hand, threw his arms around me with glorious, exuberant joy.”

Maybe it’s because he pastored a congregation for 12 years, but Rick is gifted at “parableizing” his encounters, according to his wife, Lorri. “I’ve always admired his ability to see the spiritual side of everything,” says Lorri, who also attended SPU. “He sees everybody without the exterior. He doesn’t freak out about rich folks, and he doesn’t freak about poor folks. It’s just ‘people are people are people.’”

The most rewarding parts of Rick’s job are watching people get sober, come to faith in Christ, hold steady jobs, or get keys to their own apartment. Apparent strangers will stop him on the street and say, “Do you remember me? I got off crack.”

His vocation also includes worries about finances, and the disappointment of relapses and failures. Some Fridays at 12 a.m., he’ll come back from a Thursday night of bar ministry and ask, “Did I do anybody any good?” But even then he wonders what God was up to. “I know how the work of the kingdom is. Sometimes it’s really invisible.”

Rick says he could never imagine a time when he won’t be caring for the homeless. “My idea of retirement hell would be my feet up on the beach,” he says. “I’m thankful that I couldn’t handle sixth-graders, so God gave me homeless people.”