From the President Engaging the Culture, Changing the World 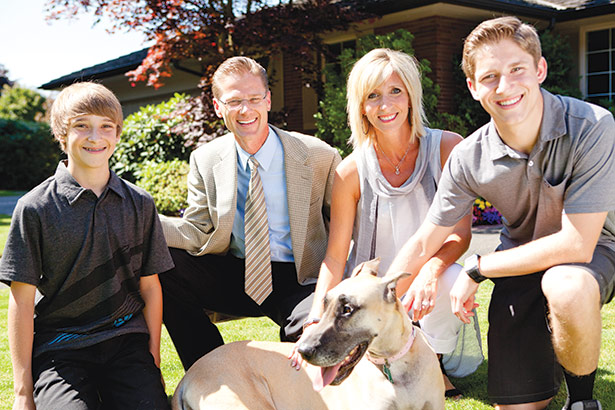 Josh, 13, is more artistic and laid back than his older brother. Jake, 15, is into cars and more competitive than his younger brother. The Martin boys like their music loud and in this order of importance: pop, R&B, and hip hop. Country music? The very question elicits protests of “No, no way!”

Wrestling is their favorite indoor sport. A lot of wrestling each other, to be sure, but if the teens can involve their dad, even better.

“I can take both of them,” says Jake.

If doubt had a sound, it would be the sound that Josh makes. “I wait until they're both tied up,” he explains, a glint in his eye. “Then I pounce.”

There's a lot of music, pouncing, and some deep-throated barking in Hillford House these days. For the first time in 44 years, the Seattle Pacific University president's private home reverberates with the noisy energy of a resident family, complete with growing children and a Great Dane named Josie.

“Weekends and evenings, we love being together,” says Pam Martin, wife, mother, and half-marathoner. The family enjoys attending professional sports events, turning out in force for the boys' soccer games, and shopping together. One unfortunate “antiques phase,” however, left the boys glassy-eyed.

And there was the charter fishing trip out of Westport, Washington, meant to be a fun way for the Martins, who once lived in San Diego, California, to reacclimatize to the West Coast. Thirty-five miles at sea, some of them were decidedly queasy.

“Our extended families are concentrated in Kansas,” says Pam, who moved here from the equally flat state of Ohio. “My first Seattle impression was of the tall evergreen trees.”

The former third grade teacher and children's pastor takes daily runs and frequent Josie walks. Because one neighborhood resident has chickens in the yard, it means taking the Dane to the opposite side of the street. “Her bark's worse than her bite,” Pam says, but admits Josie wears a pink sequined collar to help convince others.

As for living in the shadow of Ashton Hall and its 400-plus student residents, the Martins say they enjoy hosting students in their home. Pam smiles. “Because of our past experience, the boys are used to it. Josie's the one who minds.”