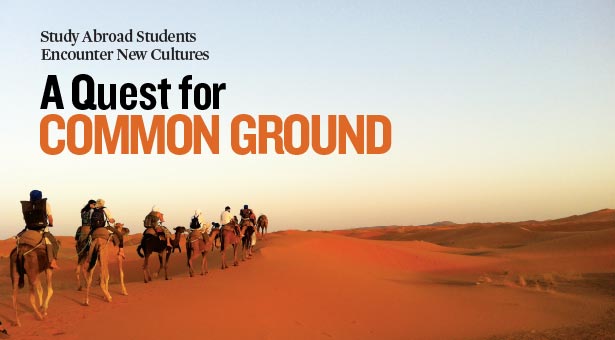 SPU students studying abroad in Morocco explored the Sahara desert at sunset on the backs of camels.

Chelsey Armstrong didn’t expect to discover religious reconciliation over a meal of lamb and couscous in the home of a Muslim family while abroad in Morocco. But it was far from home, dining with a family whose language she didn’t share, when Armstrong began to understand what reconciliation could look like. “I know SPU talks about reconciliation a lot, but we were experiencing it, Muslims and Christians, eating together and laughing together.”

Armstrong’s journey to Morocco is one of several new offerings from Seattle Pacific University’s study abroad program, through which students engage the culture by becoming immersed in it, sharing everything from prayer, to community, to food.

Conversing Over Dinner in Morocco

Armstrong, a junior sociology major, says that she expected to feel more comfortable in Spain than Morocco on a trip to both countries over three weeks in September 2012. If nothing else, she figured, the people in Spain shared her Christian faith. Most of Morocco is Muslim.

Her trip to Spain and Morocco followed the story told by novelist Laila Lalami in Hope and Other Dangerous Pursuits. The book traces the lives of immigrant families illegally crossing the Strait of Gibraltar into Spain from Morocco.

“Crossing territory opens up an altered vision of global citizenship,” explains Professor of English Kimberly Segall, who led the trip. “Walking through the medina quarter with a Moroccan guide, who details the historical entanglement between Europe and North Africa, enlarges our interpretation of the text, of cultural crossings, of ourselves.”

Armstrong was correct: Spain and Morocco were quite different “in every way possible, from the food to the people,” she says. But surprisingly, Morocco was where she felt the most at home. 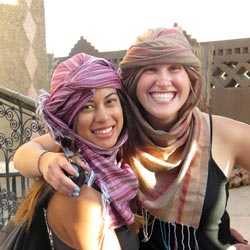 
While there, the students split up into groups of four and met with students from a local university. That's where Armstrong met Meryeme, a young Muslim student. She invited the SPU student and her group to dinner at her house with her entire family. “They made us this amazing four-course meal with lamb, and chicken, and fruit, and couscous,” Armstrong says.

The dining companions compared their two faiths, while Meryeme translated, all quickly realizing that neither fit flat stereotypes. “I've never laughed so hard as I did when I was eating with them,” says Caitlin Gould, a junior majoring in elementary education, who was also at the dinner.

Gould adds that the meal with Meryeme occurred on a day of especially bad political unrest in Libya. “So to me, it was a beautiful sign of reconciliation, that four of us Americans received hospitality from a Muslim family despite the fact that our cultures were in conflict.”

Meeting Basic Needs in the Philippines

Each year, nearly 250 SPU students travel to approximately 20 different countries to study abroad. The trips range in length from a few weeks to several months.

“While living abroad, students learn things they could never learn from a textbook and meet people they'd never otherwise have the opportunity to meet,” says Gail DeBell, study abroad director at Seattle Pacific. “We hear from students that their academic and career goals have changed after they've studied abroad.”

That kind of hands-on learning is exactly what Sharleen Kato, co-director and professor in the Department of Family and Consumer Sciences, had in mind when she created a study abroad trip to the Philippines. Last year, Kato spent her Christmas break with a class of students, assisting teens and orphaned children through Kids International Ministries, based in Manila. She designed the trip to be a short-term, for-credit experience focused on the skills FCS students are learning and very real needs in the world.

A few years ago, she and her family had gone to the Philippines to give workers in an orphanage some time off over the Christmas holidays. “We were in way over our heads,” Kato says. She recalls caring for a sick infant, unsure what to do. “He would cry, and I would cry.”

What many people needed, she discovered, was pretty simple: access to healthy food, clean dressings for wounds, and other daily needs.

Seeing an overlap with the FCS commitment to meeting the basic needs of food, clothing, and shelter, Kato proposed the study abroad class in 2010. By 2011, her first group of students headed for the Philippines.

Kato's students receive class credit as they tutor, participate in community feedings, and assist with medical care. “I think it's service learning in the truest sense,” she says.

Jacob Redding, now a senior psychology and theology major serving as the Associated Students of Seattle Pacific vice president of finance, was on that inaugural trip. While there, he discovered the power of something as simple as hanging out: “I played hours of basketball with the street kids and the young men in the community. Those experiences of just being present were the most memorable for me.”

Redding returned to the Philippines for Christmas in 2012 — a trip more important than ever due to Typhoon Pablo, which ravaged the country in December.

Kato adds that the trip “really created new opportunities” for students. She has a student now headed to the Peace Corps, another in India, and a third doing mission work in Europe.

Criss Mitchell holds his hand up to his waist, showing the height of the mountainside cubicles where some Korean Christians pray. “They are these small cells where people pray all night,” Mitchell explains, crouching down to give a sense of the confining space.

Mitchell encountered Korean mountain prayer on a two-week trip with other students of Seattle Pacific Seminary — where he is pursuing a master of divinity degree — last September.

After the Korean War, South Korea saw an explosion of industry, expanding modern cities, and wealth. At the same time, Christian church attendance exploded. Yoido Full Gospel Church in Seoul boasts a membership between 800,000 and 1 million. “It's one of the largest churches in world,” Vo says.

But in the last two decades, membership at Christian churches in Korea has waned, he says, similar to flagging membership in the United States. That is part of what made Korea an ideal place for a two-week immersion trip with Seminary students who are trying to figure out new ways to keep the church thriving in America.

For Mitchell, the trip was especially poignant, since he was born in Korea to an American soldier and Korean mother. He left the country while still a toddler.

The seminarians spent time with Korean counterparts learning about ministry and doing things that you'll likely find at any campus: playing the guitar and singing praise songs. Where the two cultures dramatically differed, Mitchell explains, is in the realm of prayer.

Koreans have three prayer practices many of the students had never encountered before: early morning prayers, mountain prayers, and all-night prayer meetings. Mitchell admits to being a little skeptical about the rigorous prayer schedules. “I thought it would be a form of legalism,” he says. “But what I experienced instead was how that was an expression of devotion— an expression of grace.”

“One of the things with Korean prayer,” he continues, “is that it's very loud. There's an emphasis on being fully engaged in prayer. They yell because it's hard to think about anything else when you're yelling.”

Vo says that among the most important and memorable aspects of the trip for him was “seeing some of our students try to make sense of those experiences during those prayer meetings.”

Mitchell will be taking what he learned with him into his life in ministry. And Vo will take a new group of students out in 2014 to experience the life of prayer in Beijing.

These students and the faculty that go with them meet the world in all its forms — Christian or Muslim, poor or rich, quiet and contemplative, or shouting prayers on a mountain. They are changed by those encounters, some returning to Seattle with what they have learned, and others taking it into far corners of the world, to share more meals and build more relationships.

Laura Onstot '03 lives in Seattle where she cleans up words at Expedia.com. She also writes on topics from food to politics, with work appearing in Seattle Weekly, The Seattle Times, High Country News, MSN, AOL, and The Rumpus.