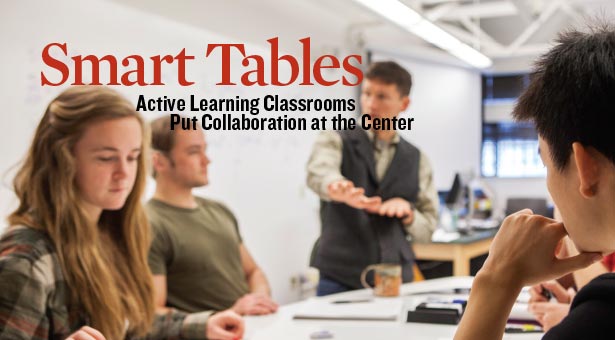 The writing is on the wall — literally.

Unlike traditional classrooms — where a professor stands in front of students who are seated in rows of desks — the new spaces feature six “pods” of moveable tables that seat nine students. There are whiteboard walls; a large screen for the instructor; and one flat video screen near each pod to which students can connect their laptops.

But the focus isn’t on “high tech” for technology’s sake.

For the last 15 years, research in education has focused on how students learn best, says Margaret Diddams, director of the Center for Scholarship and Faculty Development and professor of industrial/organizational psychology. That research, she explains, “is helping higher education become more student-centered.”

Active Learning Classrooms first began showing up in the physics and biology departments at large universities about 10 years ago, says David Wicks, assistant professor and director of Instructional Technology Services at Seattle Pacific. “But I don’t know of another institution where, from the beginning, all disciplines used these classrooms. That’s what has happened at SPU.”

The idea is for students to learn in community, and to take an active role in their own education. “Many students are comfortable taking notes while in class,” explains Associate Professor of Physics Lane Seeley. “But active learning says your responsibility is to challenge yourself and construct your understanding as you go. That’s asking a lot of students.”

Senior Emily Johnson experienced this for herself when she enrolled in “Global Perspectives on Women’s Issues,” held in Cremona 102 and taught by Associate Professor of Political Science Ruth Ediger. Assigned to a particular table and the same group of students for the entire quarter, Johnson was initially concerned that only one or two students at her table would contribute to discussions. But that wasn’t the case. “The group felt like it had purpose,” says the global development studies major. “It made learning more of an overall group effort.” 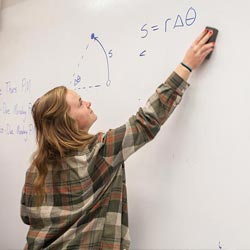 
Active Learning Classrooms don't have a “front,” and are not designed for traditional lectures. Instead, instructors have exchanged 50-minute lectures for mini lectures, group discussions, and small-group interaction interspersed throughout the class time. In Johnson's class, each table's group discussed a different question based on their reading.

Ultimately the groups wrote their findings on the wall, and the discussions expanded to the entire class. “Then the professor would weigh in, not in a lecture but to give us more information,” Johnson says.

Professors like what the're seeing so far. “I always have policy wonks in my classes,” says Professor of Political Science Reed Davis. “There are two or three students who, if I let them, will dominate the conversation. In these smaller groups, students talk to each other, and I see greater participation. Students are having richer learning experiences.”

Davis calls each of the six tables a congressional district. In their districts, students debate the best news story of the day for extra credit once a week, and they spend time quizzing each other before exams.

With those kinds of successes, Seattle Pacific continues to add Active Learning Classrooms with a variety of features. In addition to the two Cremona Classrooms, the Physics Department has had Otto Miller 138 upgraded with eight whiteboard-topped tables and a flat video screen near each. The tall, elliptical tables allow professors, while standing, to interact easily with students as they work on projects. Another Active Learning Classroom goes live during Winter Quarter in Peterson Hall for the School of Education; and classrooms in Demaray Hall are exchanging the traditional rows of desks for tables and whiteboard walls.

“These changes go particularly well with President Martin's focus on discovering the best ways for students to learn and for faculty to assess that learning,” says Diddams. Martin has stated that he wants Seattle Pacific to be a leader in new methods of educational delivery.

What's the evidence that students learn more in Active Learning Classrooms? SPU is collecting the data across all the disciplines, says Diddams, but the Physics Department has been doing its own study since 2005. National studies show that students gain an average of 30 percent more new concepts in traditionally taught lecture courses. Using active learning strategies, student gains increase to 48 or 49 percent. Physics students at SPU have that beat: They average a 56 percent gain.

But the data doesn't tell the whole story. “The classroom is certainly a supportive piece,” says Seeley. “But in the end, it's really the people, the relationships, and the interaction within the community that make the biggest difference.”