Champion of the Gospel

Can you identify the young female missionary pictured in the front row, third from the left?

Though activism against human trafficking is fairly recent among Seattle Pacific University students, decades of Seattle Pacific students have dedicated themselves to God’s good news of freedom. The young female missionary pictured in the front row, third from the left, survived abandonment, imprisonment, and even a trek across the Himalayas to do so.

Can you identify her — or better yet, all the members of this group? Hint: she was SPU’s 2007 Alumna of the Year.

Send in your answers by August 15, 2015, and you will be entered into a drawing to win an SPU sweatshirt! Submit your answer below. 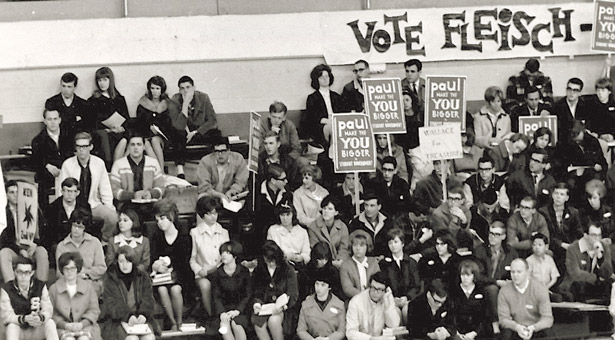 Many readers wrote in to identify the peppy election rally for the 1967 Associated Students of Seattle Pacific election. John Pearson ’68 won the nomination for 1967–68 student body president by a very slim margin over Rick Ryding ’68 and Paul Fleischmann ’68, whose campaign signs are pictured here.

It’s no surprise that many of our respondents were likely voters in that election, including Bob Rorabaugh ’69, who writes, “My college sweetheart, Jan Vandehey, is pictured in the lower left hand corner of the ‘Sloganeers Extraordinaire’ photo. I’m the white pant leg and letter-jacket sleeve to her right. We were married for our senior year, 1968–69, and are now at more than 46 years of marriage.”

Congratulations to them, and to contest winner Kathy Swanson Hoff ’67!

Want to Contribute to the SPU Archives?

If you have historic Seattle Pacific artifacts, keepsakes, or documents that you would like to contribute to the University Archives, or if you have any questions about the Archives, contact Adrienne Thun Meier ’04, university archivist, at 206-281-2422 or ameier@spu.edu.

Can you identify the young female missionary pictured above in the front row, third from the left?

Send in your answer by August 15, 2015, to be entered into a drawing to win an SPU sweatshirt!