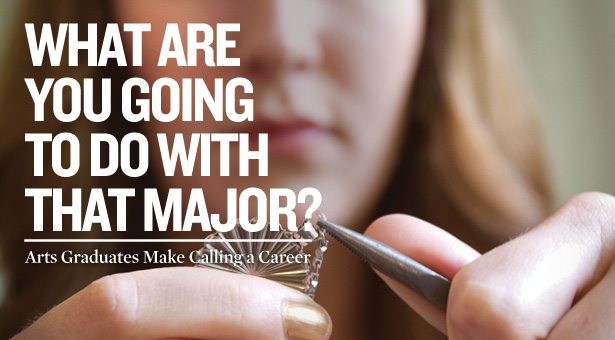 As a child, Moorea Seal thrived on hours alone drawing and daydreaming, and grew up chasing her imagination. When in 2005 she and her curious spirit arrived at Seattle Pacific University, they switched majors between apparel design, philosophy, and studio art. Not wanting to be boxed in, believing that life is for learning and continual growth, Seal kept her options open.

Detractors scoffed. It's too hard to make it as an artist. Artists don't make enough money. Strong-willed, she was deter­mined to do what fulfilled her most in life. She was good at art. She would make it work.

"Professor and artist Laura Lasworth, head of the illustration program, was the first person I can remember who encouraged me in my career dreams," says Seal. "She always had faith in me and made me feel like I could do anything." Seal graduated from SPU in 2009 with a bachelor's degree in studio art, emphasis in illustration.

Today, she is her own boss, and her art pays the bills. She has sold more than 300 pieces of handmade jewelry in the past year via her online Etsy shop, and her unique jewelry is carried in a number of boutiques and larger stores in the U.S. and abroad. She illustrates music album covers and portraits, and designs blogs on the web. On her own blog, she encourages others to pursue their entrepreneurial and artistic projects. The site averages 32,000 hits per month.

"What everyone teased was just my cute little hobby is now my niche in the art world," Seal says.

How viable is an arts degree? Can it provide a living wage? Is it an arena in which troubled lives can be renewed? In sometimes surprising ways, Seattle Pacific arts graduates discover that the arts can provide a sustainable lifestyle and open doors of unexpected influence.

Shaun McMichael's art niche is a powerful blend of the practical and the creative. The 2009 graduate double majored in psychology and creative writing. He is zine instructor for Seattle's University District Youth Center for homeless, at-risk youth.

They struggle with any number of things," says McMichael, "most commonly trauma, mental illness, addiction, and instability." In addition to mental health and chemical dependency counseling, the Youth Center offers employment through the Zine Project. Every eight weeks, five homeless youth are hired as interns to learn, work, and write with McMichael.

"I teach them literary concepts and assign writing that prompts exploration of their emotions." McMichael facilitates each intern's creation of a personal zine, or magazine, containing personal artwork and writing.

Through the zines, the youth have a rare chance to meditate instead of irrationally reacting to life. "Though the writing is rough, those who do the work create something that can help them and others – family, friends, providers – empathize and proceed in this life together," McMichael says.

Ashley Dyer '11 was a broken person before art became her passion and her livelihood. She freely admits that when she first arrived at SPU, she was a Christian in name only. "I had no comprehension of what Christ did for me, only that at SPU I would be surrounded by ‘good people' and become a doctor," she recalls. But a failed quarter later, she knew she was no biology student.

From left to right: Alyssa Fridenmaker (right) gives guidance to a piano student; Moorea Seal crafts a unique piece of jewelry; actors on the set of A Woman Killed With Kindness have Bonnie Prather backstage helping them with costumes; Shaun McMichael discusses creative writing with a student at the University District Youth Center.

For two years she struggled for identity, sinking into depression. She turned to alcohol.

It was in her church family that Dyer witnessed the power of the risen Christ. "God raised me from deadness. Christ freed me from alcohol. Art immediately appealed to me because I could see the artist's identity on canvas," she says.

Soon she also saw how her love of sales when applied to art formed the crossroads of her passion. She could help the struggling street artist find an audience.

Dyer interned for Gallery IMA in Seattle's Pioneer Square. Part of a small team, she saw how installations, marketing, communication, and sales worked together to represent an artist's work. Her plan took shape. She would provide options for kids trapped in gangs and without funds for continued education. She would sell their art to meet their needs. Dyer completed her graduation requirements this summer with "Art and Incarnation," SPU's one-month study abroad program in Rome. She found an internship at the new Galleria NoveTreZero, visiting art wonders such as the Sistine Chapel by day and working the gallery in the evenings. Up next? A move to the San Francisco Bay Area to join a network of artist friends, a step closer to the gallery of her dreams.

Internationally is where Bonnie Prather '07 employs her theatre art as a professional costumer dressing actors in London. Her career began on work study for the production of Les Misérables at Queen's Theatre, while she was studying for a master's degree in costume design. A co-worker recommended her to Andrew Lloyd Webber's wardrobe manager on the production of Love Never Dies at the Adelphi Theatre.

This past year, she moved on to the Aldwych Theatre to become an ensemble dresser for the stage version of Dirty Dancing. While Baby and Johnny were falling in love on stage, Prather was backstage, getting groups of actors into and out of costumes at rapid-fire pace (Velcro and snaps helped). She buttoned shirts, arranged neckties, hunted for kicked-off shoes, hung costumes, and readied pieces to be worn again.

Just after the show closed this summer to go on tour, Prather was hired by the National Theatre – London's largest venue for plays – to dress a new production of A Woman Killed With Kindness.

"There were the eternal arts jokes the whole of my college career," she says. Despite the jibes, and thanks to Seattle's strong theatre community and SPU's extensive theatre connections, she always held a clear view of where she wanted to go and how to get there.

During Prather's college years, her family prayed for her decisions rather than try to dissuade her from her choices. She did take a step toward what's often seen as "job security" for arts majors by starting down the path to education certification in her junior year. But she quickly found that the classroom was not her calling.

The costumer has no regrets about throwing herself into the theatre world, where she may be the only "fun" Christian her colleagues know. "Engaging the culture doesn't mean living outside of it in a ‘holier-than-thou' bubble," Prather says.

Alyssa Fridenmaker '08 knows a great deal about staying busy. The classically trained violinist and pianist runs a private music studio for more than 20 students ages 4 to 54. There is violin coaching for a regional youth symphony; and playing at weddings, parties, business meetings, and memorial services. She performs in Sprezzatura, a Seattle-based piano trio, with Rose McIntosh '09 on violin and Ellen Pew '10 on cello, and she is an accompanist for SPU.

"Those close to me saw this as the natural field for me," she says, "but others along the way asked how I intended to make a living. God has opened doors!" She makes 100 percent of her income from music.

"Spending time on art, when so many people have to spend all their time working for economic survival, seemed like a shocking privilege to me. Image helped me untangle some of that misplaced humility."
– Taylor Morris, assistant managing editor of Image journal

Over at Image, the assistant managing editor says the literary journal housed on SPU's campus "publishes art that grapples with religious faith without being moralistic or prescriptive." Taylor Morris took a 2009 bachelor's degree in English literature and turned it into a job "tending lots of pots at once!" She does graphic design for the Image website, helps plan Image events, administrates online writing classes, and is "the woman behind the curtain" for the journal's Facebook and Twitter pages.

Morris admits she's had to trust that art could feed soul and body. "I dealt with my own naysaying more than anyone else's," she says. "Spending time on art, when so many people have to spend all their time working for economic survival, seemed like a shocking privilege to me. Image helped me untangle some of that misplaced humility."

Art, she is convinced, is necessary work if you can accept that risk and sacrifice are part of the package.

92% of arts graduates who wished to work were currently employed.

65% of survey respondents were employed in arts professions.

While artists aren’t rich, many are entrepreneurial and self-employed, and they report high levels of career satisfaction.

The Strategic National Arts Alumni Project of the Indiana University Center for Postsecondary Research reports that 92 percent of arts graduates who wish to work currently are, with most (81 percent) finding employment soon after graduating.

Fine and performing arts and visual communications departments at Seattle Pacific University have actively developed an extensive network of professional contacts, mentoring relationships, and internship opportunities. The centers for Career and Calling and Applied Learning also provide an extensive network of professional contacts, and help with résumés, cover letters, portfolio development, and other successful presentation techniques.

In the senior studio art program, Professor of Art Laura Lasworth meets the “starving artist syndrome” head on. The Spring Quarter “Senior Capstone” class for art majors teaches them how to research and apply to graduate school; about grants and residencies for artists; how social networks might help them achieve success by building community; how the use of technology can help them be both relevant and competitive; and practical ways “to prepare for the long haul of life as an artist,” Lasworth says.

“In my own experience, I came from a poor family,” she says. “My single mother was the sole support of four children. I started out with only two tangible advantages — a little bit of talent and a large gift of faith. The school loans were paid off years ago, and I have been for some time completely self-supporting through the combination of my studio practice and academic career.”