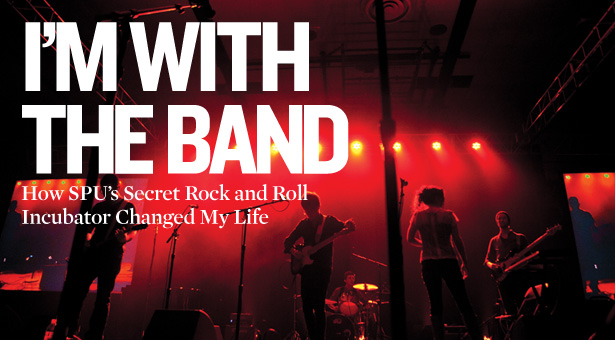 I have to be honest: I wasn’t sure I wanted to go to Seattle Pacific University. I was 18 years old and on a preview weekend to SPU, and it wasn’t going well for me. I slept for one night in the dorm room of a freshman student with whom I couldn’t have felt less camaraderie. He was a business major who loved snowboarding, and I was a music nerd clutching my well-worn copy of Catcher in the Rye. I had nothing against business and snowboarding on principle, but was this what was waiting for me at SPU? If so, I decided I’d give it a pass. Until I went to the concert.

Of course there was a concert. If you’ve spent much time in evangelical Christian institutions, you know that wherever two or more are gathered, someone is probably going to produce a guitar and start strumming “As the Deer.” Or, if it was the late ’90s, an embarrassingly earnest Christian ska band from central Washington was going to show up. Which they did. I sat through 40 minutes of painfully “fun” music and wondered if the unlimited free breakfast cereal in the cafeteria was the best thing about the place.

But it was the second band, a now long- departed group called Wes Dando, made up of three SPU students, that got me. From the moment they stepped onto the makeshift stage of the old Gwinn Commons, I was riveted.

Why did an indie rock band convince me to attend SPU? So much of what makes music compelling is elusive, and to capture it in words on paper is difficult. What did it for me, I guess, is that this band didn’t say anything at all. They were three very plain-looking white guys who did not speak to the audience, but their songs said a lot. I could feel truth and honesty and caring somewhere in the loud, distorted pop they were playing. They probably weren’t thinking this — they were just kids in a band — but I was feeling it.

I stopped thinking about snowboarding and started feeling how much love, hope, and faith seemed to be entering my body from the amps and drums in front of me. Their music didn’t sound like the Christian bands I’d been listening to for most of my teen years — not Petra, Jars of Clay, or DC Talk. It sounded like XTC, Blur, Pedro the Lion, or Ride, bands I was only dimly aware of and would later grow to love.

Seattle Pacific conveniently fit goal No. 1, and, perhaps surprisingly, turned out to be the perfect place for No. 2. Besides being an institution of higher learning, SPU also contained a close-knit community of liberal arts students who already possessed basic songwriting skills, having learned to play guitar at Bible camp. We had professors who could discuss the merits of Nick Cave, Eminem, and U2. We had access to an expensive sound system (ask a sound guy; Christians always have the high-end gear). Seattle’s best record stores were a short walk or bus ride away. The student radio station (KSPU) and literary journal (then Second Essence, now Lingua) were eager to give a platform to up-and-coming songwriters.

Most crucially, almost everyone, regardless of major or denominational background, was heavily invested in culture-making. We are the people who brought you the Reformation, abolitionism, and Psalty the singing songbook, after all. There’s no reason for SPU not to be a haven of rock ’n’ roll creativity.

So I was overjoyed to find out, on my first day at SPU, that my new roommate, Nathan, was a piano player, and Kevin, the guy who lived next door to us, played guitar.

"Most crucially, almost everyone, regardless of major or denominational background, was heavily invested in culture-making. We are the people who brought you the Refor­mation, abolitionism, and Psalty the singing songbook, after all. There’s no reason for SPU not to be a haven of rock ’n’ roll creativity."

We soon settled into a five-piece group, the Dandelion Method, which became a rock band and a family, practicing one to three nights a week for nearly five years. We played whenever and wherever possible, at cafés and dive bars, in remote fields for no one, at the SPU Homecoming Talent Show and house shows, and once, for $700, at a megachurch whose youth group spent 45 minutes throwing pancakes at each other and us.

And once in a while, in a dank hole of a bar somewhere, something beautiful happened, like one weeknight in Ballard.

We were slated to play last, which I used to think would mean we were “headlining,” but I now know means “nobody is going to come see us play in Ballard after midnight on a weekday.” The first band was musically tight, but the overall vibe was one of sad, lonely men doing their best U2 impression in an unpopular bar in a yuppie neighborhood. Next was a pretentious electronic group with about five drum machines and 10 synthesizers that take two hours to set up and sound check. Of course, they played their noodly, pointless jams for over an hour. Normally, I’d have been enjoying myself — I do kind of like that type of music — but I had a sinking suspicion that we weren’t going to play at all.

There was no one left in the club but the promoter, the bartender, two girlfriends, and a man who wandered in off the street and passed out on a table. After some deliberation, we decided to play anyway. We were young and living the dream — what did we care that we were tired, irritable, and had exams tomorrow?

In fact, since we didn’t feel any obligation to play well, we played great, breezing through our songs, and, at the end of the set, breaking into a spontaneous noise freak-out jam. Matt and Kevin cranked their guitars and effects up; screeches and squalls of feedback filled the room. I was battering the drums when I looked up to see that Kevin had turned around and had begun the process of knocking my set over, and two things hit me: first, the sharp edge of a cymbal, squarely in the back of the head, and second, the realization, “I am in a rock band and we are trashing the stage. My life is complete.” I continued to play, though I suspected I may have been bleeding, now on my knees, Kevin still kicking pieces of the set over, and Andrew, who almost never even moved while playing the bass, joining in by knocking a mic stand over. 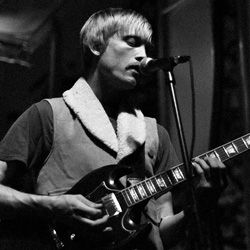 This was the kind of thing I’d been hoping to experience ever since I started my love affair with rock music. As a drummer, I inhabit a space between creation and annihilation; to play the drums is, in a way, to destroy them. The creative destruction of rock ’n’ roll has always seemed to me to have a kind of divine impulse to it. I agree with Bach that all music is for the glory of God, and I agree with the Bible that God is love, and I love music. I can’t do the math here, but I’m pretty sure it all adds up to destroying a drum set being an act of worship. We didn’t care that it was 1:30 in the morning and that I had class in a few hours. We just wanted to destroy the stage because God is Love.

The band broke up not long after we all graduated. Yet being the drummer in the Dandelion Method, as small and meaningless as the endeavor was, as little recognition and money we earned, still stands as one of the most rewarding experiences of my life, if only for those tiny moments of musical communion.

I look at where we’ve moved in the 10 years since we started playing music together — the Ph.D.s, the families started, the brilliant albums made with new bands, the silent work of loving our friends and neighbors — and I see this as the legacy of what we did back then. Why do we keep laboring to create art and change and lives filled with meaning and purpose? If I can dare to say this, I think the love and care that we’ve put into these new endeavors are things we learned from putting that love and care into our weird little pop songs, and into our relationships with each other, incubated at a Christian university in Seattle.

Joel Heng Hartse '03 is the author of Sects, Love, and Rock & Roll: My Life on Record (Cascade Books, 2010), from which this essay has been adapted. He teaches English as a second language to university students and is working on a doctorate in the Department of Language and Literacy Education at the University of British Columbia. He lives in Vancouver with his wife, Sarah Heng Hartse '02, who works in graphic design and marketing at a tech company.

Used by permission of Wipf and Stock Publishers (wipfandstock.com).

The last decade has seen an explosion of creative rock albums made by former Falcons. From electronica to worship music to post-rock, SPU alumni have participated in the making of some of the best records I’ve heard.