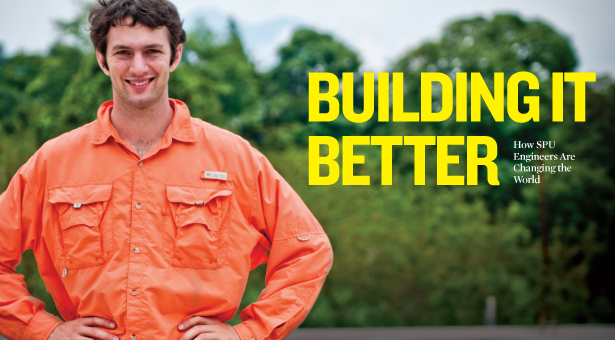 Matthew McIntire '07 began a project to create a solar-powered stove for cooking tortillas in Guatemala. Now, current SPU engineering students are continuing to develop the stove for their senior design project.

Tortillas make an appearance at most meals in Guatemala. Keeping families well-stocked with the food staple requires people to spend a lot of time cooking.

"Everybody cooks tortillas here, and most of the people cook them over an open fire, and they breathe the smoke all day long, which leads to a lot of respiratory issues," explains Matthew McIntire '07. McIntire, living in Magdalena Milpas Altas, Guatemala, and working with Students International, launched a project to create a solar-powered stove for cooking tortillas to help save people's lungs.

He — and an increasing number of Seattle Pacific University engineering and physics students — are bringing their skills not to the local tech giants in Seattle, but to developing countries and underserved communities. They help establish solar electricity in remote villages, wire small towns for Internet, and make the tortilla-making process a little safer.

A Major With a Mission

Almost a decade ago, McIntire was a high school student in Canby, Oregon, flipping through college catalogs. After a trip to Mexicali, where he and a team did construction on a church, "I felt very fulfilled doing that sort of work and wanted to do more of it," he remembers.

Then he came across an entry in the Seattle Pacific catalog: engineering and applied science with a mission focus. "That was what made me want to go to SPU," he says.

In 1998, Associate Professor of Physics and Engineering John Lindberg had an idea to create a major for scientists who wanted to use their skills in communities with different cultural mores, different resources, and in many cases, far more poverty than the United States.

Lindberg, along with Professor of Engineering Elaine Scott and former faculty member Anthony Donaldson, collaborated with faculty from other disciplines. Their goal was "to somehow try and develop these skills in engineering students who want to change the world," Lindberg explains.

In 1999, SPU launched the missionfocused engineering major, which is now known as appropriate and sustainable engineering. In 2003, they had their first two graduates, Matthew Roddy and Matthew Basinger.

Basinger spent part of 2011 in Uganda working to establish solar energy infrastructure in villages (read more about this project in the Spring 2011 issue of Response). In January 2012, he, his wife, Jacinda Wiley Basinger '02, and their one-year-old son moved to Indonesia. There, working with Mission Aviation Fellowship and Papua Hope School, Jacinda is a school counselor and Matt helps meet energy and water needs in local communities.

Meanwhile, Roddy is at work as a boat designer for Seattle-based Thain Boatworks, building passenger ferries for EarthWise Ventures. The ferries will provide vital transportation across Lake Victoria in Uganda.

"What I love about this job is the combination of many interests," Roddy says. "My time at SPU revealed that I'm not purely interested in engineering, but in the combination of design, building, people, culture, and the movement of Jesus throughout it all."

The appropriate and sustainable major is having an influence on other science students, including those in the more traditional tracks. Heather Garcia, a senior electrical engineering major, traveled to Fiji with a group of engineering students. While there, she noticed that almost everyone she met was sick. "The kids were sick; most of the adults were sick; all the volunteers got sick," she says. "The biggest problem there was the water quality."

Garcia went into her year-long design project last year with water-quality problems in mind. She asked someone from the appropriate and sustainable engineering track to join her design team. They combined their efforts, developing a system for using rivers to generate the electricity needed to run a water pump and purification system.

"What I love about this job is the combination of many interests," Matthew Roddy '03 says. "My time at SPU revealed that I'm not purely interested in engineering, but in the combination of design, building, people, culture, and the movement of Jesus throughout it all."

Garcia plans to study physics in graduate school after she completes her degree this year. But even if engineering in the developing world isn't part of her career, she says she hopes to continue making occasional mission trips to places like Fiji in her life as a scientist.

Engineering science with a purpose is also part of the life of the faculty at Seattle Pacific. In her undergraduate days, Scott noticed what a difference refrigeration made in the life of women in the United States. "You didn't have to go to the market every day for food or wait for the ice truck to come," she says. "It really opened the door for women to be able to leave the home."

She thought that ensuring food could be kept safely edible without constant tending and attention could have a similar impact on the lives of people in the developing world. Last year, Scott received a small faculty grant to start looking at ways to make a refrigeration system that worked without harmful refrigerants and that could be solar powered, requiring no electricity hookups.

"How much better would the world be if everyone had refrigeration?" Scott asks. With the help of other students at SPU, she may someday be able to answer that question.

Mark Cotton '10 joined the Peace Corps after spending his entire life in the Puget Sound area. In February 2011, he left home, landing in a small village in Uganda. The engineering graduate's primary responsibility is teaching math and courses on computers. He also plans to use his engineering skills in the village.

But he's spent his first year working on getting to know the villagers, earning their trust and respect. He's seen what happens when well-meaning nonprofits or volunteers parachute in with unasked-for help. At the school where he works, "there are textbooks, chemicals, and physics devices that aren't being used," he says. 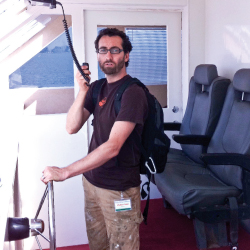 Matthew Roddy stands at the helm of Amani, which he helped design. The ferry serves Lake VIctoria in Uganda.

Lindberg says one of his goals is to help students understand the kind of cultural and resource challenges they'll face in another country: "Engineering students are the most project-based students we know, and these developing countries need people solutions. You have to work with the people, not just the project."

For McIntire's solar tortilla stove project, working with people has been key. In Guatemala, electronics are relatively expensive. Given that, it makes more sense to use people for some tasks than to automate everything. If he was making a solar stove in the U.S., he would probably add an electric eye that tracked the movements of the sun. But in Guatemala, the stove could be manual, with a person available to turn it every few minutes to keep it facing the sun.

Cotton says he wants to set up a small Internet café in his village, but thanks to a class he took on appropriate technologies, he knew that if he brought computers into town and set up solar panels, they could end up unused, like the textbooks and chemicals. "If I'm implementing things, it's not my idea, it's somebody else's idea and I'm helping them implement it," he says.

Recently a businessman in the town approached him to talk more about bringing in Internet. Now that Cotton has a local partner, it's starting to look like the right time to wire the village for the World Wide Web.

Training the Next Engineers

Seattle Pacific engineering students continue to head out of the classroom and into the countries where they can apply knowledge on the ground (read more about SPU's program in Guatemala). A partnership with Students International — a California-based nonprofit that sets up ministry sites devoted to building both faith and major development projects — has made this possible.

In 2006, Lindberg traveled to Students International's Magdalena Milpas Altas, Guatemala, location during his sabbatical. On his return, he recruited McIntire. After graduating, McIntire spent a few months fundraising, then moved to Central America to take over an appropriate technology program there.

While McIntire spoke to Response via Skype, SPU engineering senior James Inouye was standing behind him. Inouye heard about the opportunity to travel to Guatemala his freshman year and has been planning for it ever since. He's now helping McIntire create the tortilla stove.

"I wanted to use engineering as a way of service, as a way of addressing issues for those who might not be able to address them," Inouye says. And now in Guatemala, he's learning to do just that.

Laura Onstot '03 lives in Seattle and writes about everything from the city's best donuts to national politics. Her work has appeared in Seattle Weekly, The Seattle Times, High Country News, MSN, The Rumpus, The Sydney Morning Herald, and Bangkok Post. When not at a keyboard, she can be found biking, hiking, and sailing the Pacific Northwest.