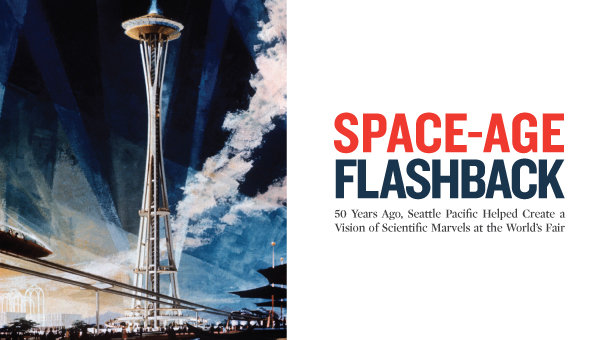 In posters advertising the 1962 Century 21 Exposition,
Seattle looked like a city from the future. UW29950Z

This isn't Back to the Future — we don't have a DeLorean time machine.

But if you browse the student newspapers and yearbooks in the Seattle Pacific University Archives, you might find your way back to 1962, when Seattle Pacific College students were visiting — and contributing to — the historic, international Century 21 Exposition, otherwise known as the Seattle World's Fair.

That's where we're headed. And we're bringing a tour guide: Rodney Stiling, SPU associate professor of history, an expert on the history of science.

As we arrive in April 17, 1962, President John F. Kennedy has just pressed a telegraph key on the opposite coast. That's prompted a radio telescope in Maine to receive an impulse from a star 10,000 light years away, which is now relayed to Seattle. It triggers fireworks. 538 bells ring. 2,000 balloons fill the air.

Welcome to the "Expo."

In the new issue of The Falcon (May 4, 1962), four SPC student reporters who "previewed" the fairgrounds tell us, "You will be thrilled, as we were, with the magnitude and impressiveness of the buildings and entertainment that await you."

Look around you, time-traveler. Does anything seem familiar? 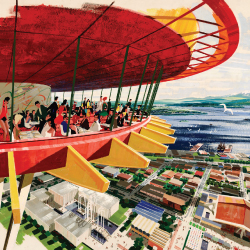 "Going up and enjoying a meal in the Space Needle was pretty amazing, unique, and enjoyable," recalls Dan Olson '62. Olson also remembers seeing Elvis Presley filming It Happened at the World's Fair on the fairgrounds. UW18953Z

The son of an aviator, Stiling grew up imagining technological advances. "I used to read Tom Swift Jr. books. In one book, the technical marvel was called the 'Triphibian Atomicar' — a terrestrial, aerial, submarine vehicle. For a sixth-grader, that was so cool," he recalls.

Speaking of futuristic transportation: Here's the new high-speed elevated monorail, bringing visitors from downtown. And 50 feet above our heads, "Skyride" cars sweep visitors around the fairgrounds on wires. Tonight, the Gayway 21 park lights up with amusement park rides like the Trip to Mars and Space Whirl.

There's a new exclamation point in the sentence of the Seattle skyline: the 605-foottall Space Needle. What began as a whim — a sketch on a napkin by Seattle businessman Eddie Carlson — is now a $4 million tower. This architectural celebrity will go on to bring in over a million visitors annually. Seattle Pacific graduate John G. Hanington '62 worked on finishing the concrete for the tower's foundation "to help pay tuition," he explains. In the coming decades, Hanington will tell that story to his family whenever he comes back to visit Seattle.

Inside "The World of Tomorrow" exhibition, groups of 100 ascend in a spherical elevator called the Bubbleator to take a 21minute tour of the future. They learn that in the future, our telephones will be cordless, and we'll cook in push-button kitchens. Deserts will bloom, and oceans will become farms. Executives will earn a staggering $12,000 a year. We'll commute to work in "aircushion" cars and gyrocopters. 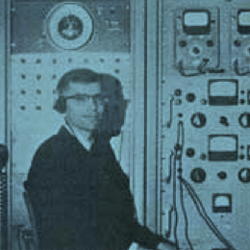 Ronald Hatch '62 was the crew chief for the Satellite Tracking Station exhibit at the World's Fair, where he and other SPC students demonstrated new technology. Courtesy of the Seattle Pacific University Archives

Furniture companies display futuristic designs, and Vogue presents forward-thinking fashion shows beside a scented pool. Under the Spacearium, a geodesic dome, 750 people at a time gather for a simulated voyage through the solar system and beyond. And five SPC math and physics students demonstrate a satellite-tracking station, which is sponsored by Johns Hopkins University's Applied Physics Laboratory, thanks to John Walton '55, a Seattle Pacific alumnus working there.

Speaking of airborne inventions: There's the Friendship 7 capsule, which just carried astronaut John Glenn around the earth. And there's John Glenn! He's drawing a crowd of admirers (but not as many as Elvis Presley, who's also here).

Let's step forward to October 21, 1962. President Kennedy is scheduled to close the fair.

But he's a no-show. Instead, he'll appear on television tomorrow to reveal that the Soviet Union is building secret missile bases in Cuba. Seattle's spirit of optimism will stumble as we remember that technology, applied without conscience, can do more harm than good.

Stiling says, "There is one current of American culture that really worships science as the way of knowing, and the path to wisdom. But as Christians, we see it as a human activity that needs to be conditioned and shaped by morality and ethical thinking."

Returning to the present, we discover that the World's Fair changed lives — including some Seattle Pacific lives.

In Centralia, Washington, the Space Needle inspired the rise of a 180-foot tower with a fake space capsule on top. Eighteen-year old Loren Wolff '66 earned a scholarship by living inside from July to September 1962, promoting the state of Washington to ham radio operators around the globe. He even spoke with people behind the Iron Curtain. He came to be known as "the Man in Space." Passers-by stopped to call him on a special telephone, and watch him on a closed-circuit television at the base of the tower.

When Centralia's Chronicle newspaper asked Wolff if he had anything in common with John Glenn, he said, "A common faith in God."

A man of vision, Wolff took that $1,000 scholarship and enrolled at Seattle Pacific.

And, after cutting steel at Northwest Steel Company for structures such as the Space Needle and the Coliseum (today's Key Arena), Jim Thurston '62 found more work with Campus Crusade in the Sermons from Science Pavilion at the Fair. The Moody Institute of Science presented films and demonstrations to open opportunities for evangelism. Thurston and other SPC students were trained to counsel those who saw the films.

Afterward, Thurston joined Campus Crusade's effort. He became founder and director of Campus Crusade's ministries in Santiago, Chile, for 10 years, and even after 46 years, he's still working as a missionary there. "Thousands of lives have been changed by the Lord in Chile," he says, "and it all started at SPC and the World's Fair."