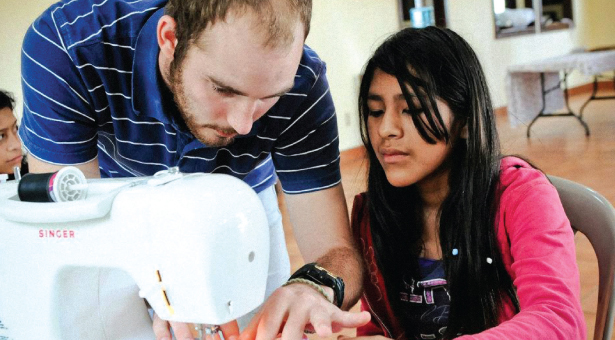 As part of his social work internship in Magdalena Milpas Altas, coordinated by Students International, SPU senior Christifer Tomoson helped this girl learn to use a sewing machine.

Even before entering Seattle Pacific University, senior Brian McConkey wanted to join a study broad trip. Once enrolled at SPU, the business major collected brochures each year, hoping to make it happen. "But it just kept not happening," he says, explaining that his campus commitments grew with each passing academic year.

Finally, while planning his senior year with his advisor, Professor of Management Denise Daniels, she mentioned a new study program in Guatemala. "I thought it was too late for me to do a study abroad because of the specific credits I still needed," he says. "It turns out I was wrong. This trip to Guatemala would not only give me the credits I needed to graduate, but it would accelerate the process for me."

So in autumn, McConkey and 11 other SPU students traveled to the "the land of eternal spring," Guatemala, for a new, annual interdisciplinary study abroad program combining intensive  coursework and internships.

"We wanted a study trip that attracted students who were premajors and needed some general education classes in social or natural sciences, or who were interested in developing countries," explains Kathleen Braden, professor of geography. On this Autumn 2011 inaugural trip, the students' disciplines varied widely: global development, engineering, and theology, as well as pre-majors.

On September 8, 2011, the students arrived in Guatemala, a country sandwiched between Mexico, Belize, El Salvador, and Honduras. In their first weeks, while based in Antigua and living with host families, students took either a global development course taught by Braden, or an earth sciences class taught by John Lindberg, associate professor of physics. And the professors made the most of Guatemala as classroom, with classes four hours a day, six days a week.

Lindberg had his students focus on volcanoes and earthquakes. About the size of Tennessee, Guatemala has more than 30 active volcanoes. Professor and students traveled 19 miles from Guatemala City to the Pacaya volcano, which has been erupting almost continuously since 1965. In Braden's social sciences course, students learned about what it means for a country to recover from a 36-year civil war. They traveled to Guatemala City to meet and learn from a team, including a Compassion International representative, that works with families living in the city dump.

Students also witnessed Guatemala's fourth-ever democratic national election on September 11. Just four days later, they watched the city celebrate the 190th anniversary of its independence from Spain. "That night the streets were filled with Antigua's youth running through the streets, blowing whistles," recalls McConkey. "The next day was a seemingly endless parade."

Yet the courses were only the beginning of this study abroad program. Once Braden and Lindberg returned to Seattle, students began one-on-one Spanish lessons with instructors from Centro Lingüístico, a language school in Antigua. No matter their fluency in Spanish on arrival, students had language classes five days a week, four hours a day. "Only Spanish was spoken," says Brittany Carlson '08, the program's on-site coordinator. "It was very intense, and by the end of four hours each day, our brains were exhausted — but it really is the best way to learn!"

For the third portion of the program, students traveled from Antigua to Magdalena Milpas Altas, a village perched at 6,000 feet, and its neighbor El Gorrión, a relocation settlement. For two weeks, students participated in one of five internships: art, microfinance, social work, appropriate technology, or agribusiness, through a partnership with mission organization Students International.

McConkey chose an agribusiness internship and found himself giving livestock antibiotic and vitamin injections, building a chicken coop for a family whose fowl had lived under the kitchen stove, building a pig pen, and castrating young cows and pigs.

"Along the way, we talked to a lot of people," he says, adding he saw firsthand the importance of keeping livestock healthy. "The margins they make on selling a bull or a pig aren't very large, so when one gets sick and dies, it really hurts." Carlson, who rotated among the internship sites, helped deliver birthday gifts to children who were part of very large families and had never before received new clothes. "The kids were in shock that a pretty wrapped gift was for them," she says.

After two weeks, all the students returned to Antigua for more intensive Spanish lessons, and then completed their internships by spending a final two weeks in Magdalena Milpas Altas. Just before Thanksgiving, they returned to Seattle.

"My time in Guatemala really showed me how much little things matter," says McConkey. "Giving a cow a vaccination, for instance, can be a really big deal. I'm becoming more and more committed to a career that has a purpose much bigger than making money."