Business A Tool to Serve the World 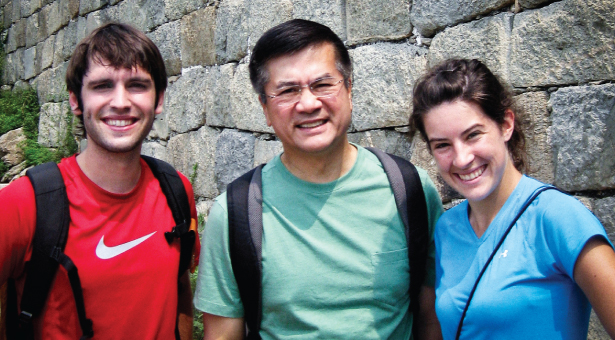 Each summer, Seattle Pacific University business students travel to China for an intensive three-week business seminar. While there, the students — undergraduate and graduate alike — visit companies in Hong Kong, Shanghai, and Beijing. They meet with business executives, visit factories, and explore cultural sites such as the Great Wall. In 2011, though, the students had an unexpected stop: the U.S. Embassy to meet with U.S. Ambassador Gary Locke.

Weeks before the students left Seattle, Ryan LaBrie, associate professor of management and information systems, had contacted the U.S. Embassy in Beijing to request an appointment with the ambassador. He hoped the students could meet with Locke, a Seattle native and the first Chinese-American ambassador ever appointed to China.

After weeks of no reply, "the Monday we arrived in Beijing, I got an email saying 'Ambassador Locke would be happy to meet with you on Thursday,'" says LaBrie. Three days later, 14 SPU students, LaBrie, and Associate Professor of Accounting Kim Sawers made their way to the U.S. Embassy.

"The embassy felt just like home," says senior Ben Anderson. "It was toward the end of the trip, and the smells of China were starting to get to us a bit. This was like a little America on the other side of the world."

The embassy, surrounded by barbed wire, fills an entire city block. Chinese soldiers guard the embassy from the outside, while U.S. Marines stand guard on the inside. Once the group was through security, they were led deep into the complex, walked through an Asian-inspired courtyard filled with statues and large U.S. emblems, traveled up escalators, and were ushered into a glassed-in conference room.

A counselor for cultural affairs briefed them on the protocol of meeting the ambassador and talked to them about Chinese economics. China is roughly the same physical size as the United States, which has a population of about 330 million people, he said. About 330 million Chinese are on par economically with Americans — but with the addition of 1 billion peasants. "That was eyeopening," says LaBrie.

When Ambassador Locke entered, the students and faculty stood. He greeted each student individually, asking their names.

For nearly an hour, the students listened as Locke talked about leadership styles and Chinese businesses. Once he invited their questions, M.B.A. student Melissa Rutherford asked how they as students can help the two countries strengthen their ties. "Ambassador Locke replied, 'Students hold the key to the future relationship between China and the United States,'" she remembers. "He said continuing to study the differences in cultures and business will allow both countries to join successful business partnerships."

The ambassador also talked about Seattle, his hometown — which included playing in and around the Seattle Pacific campus when visiting his father's small grocery store on the corner of Nickerson and Florentia streets. His family still owns a home on Queen Anne Hill.

"I was thoroughly impressed with how down-to-earth the ambassador was," says Anderson, a business major concentrating on finance and marketing. "He understands the importance of our relationship to China, and I feel confident that he can only improve it." Adds Rutherford, "He seemed thankful for a visit from hometown students."