By Julia Siemens (julia2@spu.edu) | Photos courtesy of the SPU Archive and Matthew Sumi 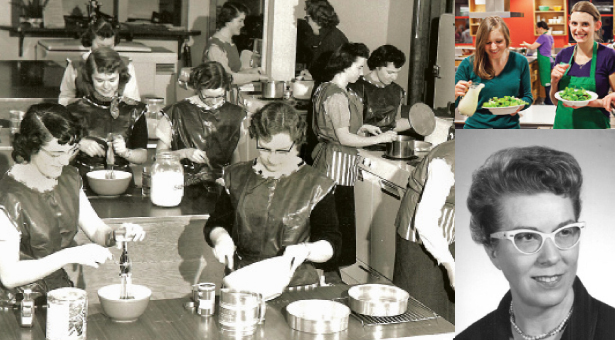 Then and now: In its 70 years of existence, the Family and Consumer Sciences program at SPU has undergone many changes. Yet the commitment to enhancing quality of life through food, clothing, shelter, and relationships has remained, fulfilling the vision of founder Dorothy Boyd Kreider (bottom right). Left: An undated photo from the SPU Archives shows students in a cooking class in the mid-1950s. Top right: FCS students Jessica Sharrard and Alyssa Musgrave show off salads prepared for the SPU Community Kitchen last year..

Some Family and Consumer Sciences alumni may feel a tinge of jealousy when they tour the newly renovated Food Lab at a special Homecoming reception this January. The new lab is cooking- show-perfect with six cooking stations that each have an oven, stove top, and prep area. When the "home economics" program began 70 years ago, the facilities were a far cry from where they are now.

The "foods classes" in the 1940s used the same equipment as biology classes: bar faucets and gas hot plates. There was also an oven, and the generosity of the program's founder, Dorothy Boyd Kreider '33. She guessed that during her 34 years with the program she opened her own home up to 3,000 people for student-prepared lunches and dinners.

Sharleen Gay Kato '82, who is a current co-director of Family and Consumer Sciences, still laments that she never got to meet Kreider, who retired in 1977 and died in 1985. "It's such a loss, because I hear from so many faculty here and former students about what a great impact she had on their lives and the program. She had the same mission and vision that we have now to improve the quality of people's lives," she says.

The department has grown from having just a few classes on food, nutrition, and clothing construction to having eight majors that fall under the areas of Individual and Family Development, Food and Nutritional Sciences, Interior Design, and Clothing and Textiles. But as the program has grown, the emphasis on meeting needs has stayed the same. "In this field, we respond to changes," Kato says. "In the 1940s it was victory gardens; now it includes issues surrounding childhood obesity, fair trade, and the green movement."

Kathy Hoff Willson '66 remem bers taking classes that emphasized research on nutrition and family relations issues, which were new areas of study at the time. She also remembers learning things that are not currently taught at SPU, such as how to iron or make beds.

"It was just a sign of the times," she says. "Women couldn't even wear jeans on campus then."

"Now there's more emphasis on career training within the programs," says Willson, who's also an instructor in the department at SPU. Another thing that has changed is the number of male students in classes. At the beginning of the program, only women enrolled. The 1939 catalog even asks, "For what higher profession can a young lady prepare than for that of homemaking?"

But in the '70s some design and management courses had equal numbers of men and women. A 1976 Seattle Times article covered Kreider's "Art of Living" class and described how male students in the class sought Dorothy's guidance on a proper wardrobe for their career. Currently, a growing number of Family and Consumer Science majors are men.

There is a great deal to celebrate in the program's 70th year, says Kato, and founder Kreider would be proud. There are graduates who are thriving in their fields, such as Chris Cushingham '09, who has gone on to start his own interior design firm in New York. Beth Ann Caryl '07 is a product developer at Nordstrom, and Kristi Shepherd Drake '83, owns a popular bakery, Le Panier in Pike Place Market. Students regularly serve the greater Seattle area through classes and internships. And last year, there were 100 FCS graduates, a record number.

Kato is particularly proud that the program has one of the few fashion and interior design programs at a Christian university. "We've never been afraid to be salt and light in places like the fashion industry."