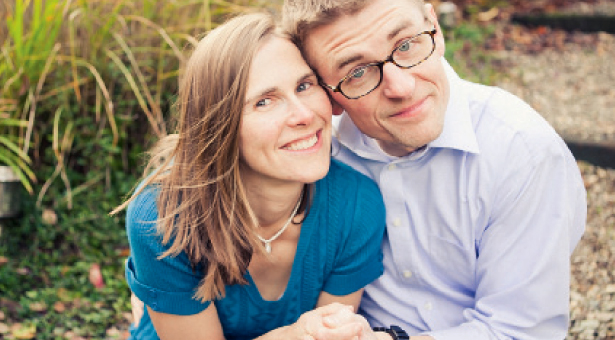 "The friendship begun in orchestra created a foundation which has faithfully supported us throughout the various storms and changes in life," says Richard Cleveland, who met his wife, Julie, at SPU.

The girl played the violin, the fellow the cello. Because they were seated on opposite sides of the Seattle Pacific University Orchestra, they enjoyed a clear view of one another. As time passed, Julie Matzen'97 and Richard Cleveland'99, M.Ed.'05, found connection in the music and a foundation upon which to build a marriage after graduation and launching their careers.

"We still gaze at each other while playing music," says Richard, who’s been married to Julie for 10 years.

The love story was submitted in response to a greeting card from Seattle Pacific. Alumni couples were invited to share their stories of how they met and how the University brought them together.

Retired teacher and band director Herbert Johnson'59 recounted the moment when he was taken with the sounds of a saxophone quartet warming up for the Student Talent Show. Mary Motley'59 may have been 25 percent of that quartet, but 52 married years later, her heart is 100 percent Herbert’s.

By contrast, upon first meeting, Melody Redstone'84 admits she wasn’t impressed with Peter Kind'84. The curly-haired blond freshman in a Falcon letterman jacket reminded her of the shallow California surfers she grew up around. Fortunately, Peter’s patience prevailed.

Early in the school year, he became her "secret admirer." Melody received daily notes, flowers, or chocolates from the mystery man. The gifts continued for months until, to her dismay, Melody learned that the admirer and the "surfer" were one.

"He just kept hanging around," she says. The day they measured their rooms together for a class project, however, was the day she began to think differently about Peter. They married the summer between their junior and senior years, moved into married housing, and became peer advisors to other married students. The couple has been wedded 27 years and now, says Melody, "my world goes from black and white to color when he walks in the room."

When Chester Hoberg Jr.'86 walked past the lounge in Marston-Watson Hall, Jana Burgess M.A.'84, M.A.'92, allegedly told her roommates, "I’m going to marry that guy." A few weeks later, they went on a Roomies Night Out and won the scavenger hunt at Seattle Center. The prize? A second date to Häagen-Dazs in the U-District. Now 25 years, five kids, three dogs, and "lots of memories later," Jana writes, "We’re still happy to say it all started at Seattle Pacific!"

Did you meet your spouse at Seattle Pacific?