Chinese Poets Tour the U.S., With a Stop in an SPU Class 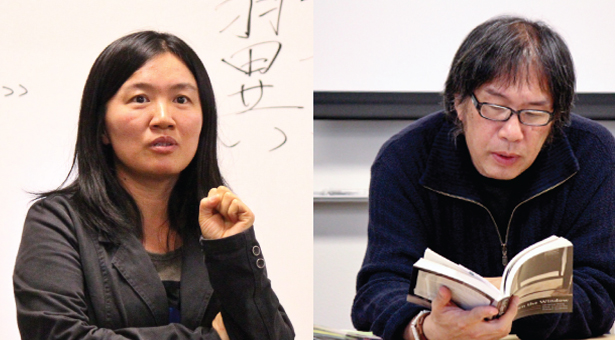 Left: Poet Zhou Zan has translated the work of many English-language writers including Margaret Atwood, Sylvia Plath, and Elizabeth Bishop, into Chinese. At right is the Chinese word for "wings," the name of the poetry journal she edits. Above: Xi Chuan, who has published five collections of his poetry in Chinese, reads to SPU students from the anthology Push Open the Window, published by Copper Canyon Press in 2011.

When she visited Professor of English Doug Thorpe's University Seminar class, poet Zhou Zan drew a Chinese word on the board: "Wings," the name of the poetry journal she edits. As she drew, she explained that "feather," "field," "together," and "birds," are all ideas embedded visually in this single word.

Understanding how different languages work, she told the class, is key to translating poetry. "I try to catch the meaning in many different ways," she said of her work as a translator.

Along with fellow poet Xi Chuan, Zhou Zan was touring the United States during September and October 2011 in support of the new book, Push Open the Window: Contemporary Poetry From China. The bilingual poetry collection includes new translations of 49 contemporary Chinese poets, including Xi and Zhou.

Their six-city book tour, which kicked off at the Seattle Asian Art Museum, included stops at the Library of Congress in Washington, D.C., and the Poetry Foundation in Chicago.

Working with Copper Canyon Press, the book's publisher based in Port Townsend, Washington, Thorpe arranged a tour stop in his University Seminar class, "Baptizing the Imagination: Poetry, Fiction, and the Kingdom of God."

During the special class session, Seattle Pacific University students had a chance to ask questions, which ranged from "What are your impressions of Seattle?" (much less crowded than Beijing, with lots of trees) to "Do you feel like the meaning of a poem gets changed in the translation process?"

In response to that question, Xi said that translation can actually enrich a poem. "Maybe after a poem has been translated, some new things about the poem will be revealed."

Xi and Zhou also read poems from Push Open the Window, both their own and those of other writers, in English and Chinese.

All SPU freshmen take a University Seminar course (or "USEM" for short) during their first semester, the first course they take as part of Seattle Pacific's Common Curriculum. Designed to help students make the academic transition from high school to college, each USEM focuses on a special topic of interest to students who enroll. A rare visit from internationally known authors only enhances the unique USEM experience.

"This event definitely affirmed our global outlook," says Thorpe. "Only a few weeks into their college experience, these students found themselves both reading ancient Chinese poetry and listening to poets who were in Beijing just days earlier. I love that sense of expansion."