The Islamic Roots of Western Science

By Don Holsinger, Professor of History 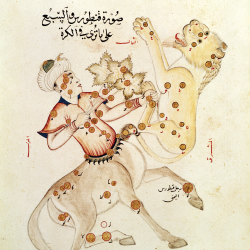 Issac Newton, whose 1687 scientific masterpiece, "tore a veil from the universe," famously commented, "If I have seen further it is by standing on the shoulders of giants." The "giants" that Newton had in mind no doubt included Polish clergyman Nicolaus Copernicus, who published his revolutionary heliocentric picture of the cosmos in 1543. But was Copernicus standing on the shoulders of Muslim scientists? Was the Middle East actually the birthplace of modern science? Recent historical research is unearthing evidence that answers "yes" to both questions.

The conventional story of Western science portrays Nicolaus Copernicus originating the Scientific Revolution by replacing a large, unmoving earth surrounded by rotating spheres of heavenly bodies with a small, spinning earth in a vast solar system, a system whose vastness becomes a tiny speck in a universe of stars so distant as to be almost unimaginable. Copernicus' radical reversal of conventional wisdom paved the way for discoveries by Galileo, Kepler, and Newton.

Historians have credited Islamic scholars with preserving the rich intellectual heritage of Hellenistic culture during Europe's "Dark Ages" by translating works from Greece and Rome into Arabic. The modern West's rediscovery of these works and subsequent rebirth is referred to as the Renaissance.

Yet recent research in Arabic sources reveals that Muslim polymaths not only preserved the Greco-Roman heritage during the Medieval period, they also combined it with other intellectual traditions from the Eastern Hemisphere. During the Islamic Golden Age, they pioneered the scientific method that we think of as Western and modern.

The House of Wisdom, a translation and research institute set up in Baghdad by the Abbasid Caliph al-Ma'mun in the early ninth century, brought together and translated into Arabic scholarly works in Greek, Coptic, Syrian, Persian, and Sanskrit languages. Al-Khwarizmi (circa 780-circa 850), an émigré from eastern Persia to Baghdad, synthesized two different mathematical approaches, the Greek geometric emphasis on shapes, area, and volume and the Indian emphasis on decimal calculation, including the radical notion of zero. In so doing, he gave to the world the foundation of modern mathematics: algebra.

This first great achievement of Islamic science demonstrated paradoxically that science is neither Islamic, nor Greek, nor Hindu. Science is a universal enterprise, and mathematics, as a universal language of precise relationships, is one of the two pillars of that enterprise. The word algorithm, a concept foundational to computer programming, is a derivation of al-Khwarizmi's name.

The second pillar of modern science — the disciplined, meticulous, and repeated process of observation that we call the empirical method — is best illustrated by two Muslim polymaths who were exact contemporaries. Armed with the mathematical toolkit provided by al-Khwarizmi, al-Biruni (973-1048) and Ibn al-Haytham (circa 965–1040) applied the language of precise relationships to the physical world, a breakthrough often attributed to Galileo six centuries later.

Using his knowledge of trigonometry, al-Biruni made repeated angle measurements from sea-level positions to the top of a mountain, and from the top of the mountain to the distant sea horizon that enabled him to calculate within 1 percent accuracy the circumference of the earth.

"The first great achievement of Islamic science demonstrated paradoxically that science is neither Islamic, nor Greek, nor Hindu. Science is a universal enterprise."

An examination of Copernicus' On the Revolution of the Heavenly Spheres reveals that not only was he indebted to the detailed star charts of medieval Muslim astronomers, he was continuing their centuries-long scientific tradition of doubting the accuracy of Ptolemy's earth-centered cosmology. As early as the 11th century, Ibn al-Haytham — the founder of modern optics — wrote a paper titled Doubts on Ptolemy.

The lands that lie at the intersection of Asia, Africa, and Europe have for millennia been a crossroads, a crucible, and a cradle of innovations that shaped the history of the planet. The formation of Islamic civilization was yet another manifestation of this dynamic at work. Arabian, Judaic, Christian, Egyptian, Persian, Hellenistic, Indian, and Chinese traditions blended there. The genius of Islamic civilization was its ability to synthesize, and science is the perfect example.

As always, answering one set of questions raises yet another. Why are we only now discovering this part of our science history? Why didn't the Islamic world produce its own Copernicus, Galileo, and Newton? How and why did the center of innovation shift to the West?

If two great civilizations, Islam and the West, had a better understanding of their shared scientific heritage, we would be more likely to work together to meet the challenges facing our planet. As Christians, will we take the opportunity to work together with our Muslim brothers and sisters? Studying our common past could just brighten our future.

Don Holsinger is a professor of history at SPU.