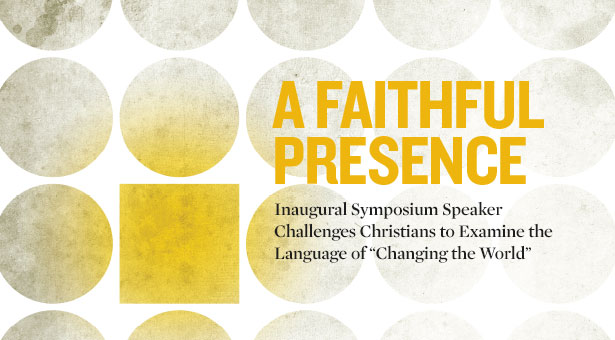 That, says James Davison Hunter, is what motivated him to write a controversial and influential book.

“I had been listening, for all of my career, to leaders and Christians on the political right, the political left, and everywhere in between, talk about ‘changing the world,’” he said during his visit to Seattle Pacific on February 26, 2013. “The rhetoric of ‘changing the world’ is ubiquitous. It can get nauseating. … So I decided to throw a grenade, and I gave a speech called ‘To Change the World.’”

That speech, he explained, evolved into his seventh book: To Change the World: The Irony, Tragedy, and Possibility of Christianity in the Late Modern World (Oxford University Press, 2010).

His friend, author and pastor Timothy Keller, observed, “You criticize about 95 percent of all Christians in this book.”

And Hunter, whose earlier book Culture Wars had also proved provocative, was concerned enough about this manuscript that he almost submitted it under a pseudonym. Sure enough, somewhat like a grenade, the book “went off,” stirring up conversation and debate.

Hunter’s book also inspired new Seattle Pacific President Dan Martin to ask the sociologist to speak at this spring’s Inaugural Year Symposium. “We were talking as a community about our mission of engaging the culture and changing the world,” says Martin. “We were asking ourselves what and how we should engage, and what change we seek. I thought James Davison Hunter would help us in the process of sharpening our understanding of our mission for the future — and he did.” 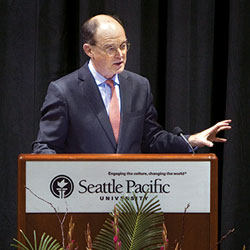 Hunter — the Labrosse-Levinson distinguished professor of religion, culture, and social theory at the University of Virginia, and executive director of the Institute for Advanced Studies in Culture — gave three presentations during the Symposium: two public lectures and a question-and-answer session with faculty.

He assured his listeners that his critique of the language of “change the world” was not a condemnation of SPU’s mission. “I believe in world change,” he said, “and I believe that Christians need to be engaging the culture. But the problem is that in most of the ways people talk about it, there is an implicit theory about what ‘the world’ is … what ‘culture’ is … and how cultures change.”

In his presentations and in an interview with Response, Hunter described three ways in which Christian cultural engagement has gone wrong.

First, he said, Christians have often sought “purity from” culture. The weakness of this paradigm, he explained, “is its tendency to portray God’s relationship to the world almost exclusively in terms of opposition. It views the church’s relationship to the world in precisely the same way, often expressing this understanding through an ethos of anxiety, anger, or fear.”

Second, said Hunter, some Christians have endeavored to become “relevant to” culture. The weakness of this practice, he said, “is that by prioritizing collaboration with culture, the church becomes indistinct from the culture.” The church runs the risk of becoming indistinguishable from the world.

Finally, some Christians have become “defensive against” the world. This view, he argued, “is similar to the ‘purity from’ paradigm in that it views the world with hostility, but it expresses this hostility not through withdrawal, but in aggression — more often than not, political aggression. Its goals, all too often, are to win at all costs.”

“Christians should be a blessing in the context they find themselves.”

Although Hunter, as a social scientist, said he is more comfortable with analyzing problems than with suggesting solutions, he offered a vision for revitalizing Christian engagement with culture. He called Christians to become “a faithful presence” in the world.

In Hunter’s view, being a “faithful presence” is the exercise of faith, hope, and love toward family, friends, neighbors, and — yes, enemies — in all spheres, from the classroom to the government, from the dinner table to the marketplace, from the neighborhood to the world stage.

This way of living was modeled for us by Jesus, said Hunter. “Jesus was not powerless, but he always used the power at his disposal for the good of others.”

Hunter said that the embrace of this vision “cannot help but generate relationships, institutions, and a kind of work that fosters meaning, purpose, truth, beauty, belonging, and fairness … not just for Christians but for everyone.”

Thus, he told SPU faculty members, he was enthusiastic about the potential of Christian higher education. In secular universities, he said, “no one ever asks the question, ‘What kind of human being are we producing?’ But here, you can ask that question.” He praised Christian colleges and universities for their ability to shape graduates’ spiritual and moral character.

During the Symposium, four Seattle Pacific faculty members — Denise Daniels, professor of management and interim dean of the School of Business and Economics; Kerry Dearborn, professor of theology; Greg Fritzberg, professor of education; and Kevin Neuhouser, professor of sociology — took part in a panel presentation to students. Each professor reflected from the perspective of his or her academic discipline on SPU’s mission of engaging the culture and changing the world.

In response to Dr. Hunter's lecture, faculty members (left to right) Kevin Neuhouser, Greg Fritzberg, Denise Daniels, and Kerry Dearborn spoke on a panel about SPU’s vision for “engaging the culture and changing the world.”

“Change happens because God has reconciled us, and that empowers us to be reconciled with other people,” said Dearborn. “We need sessions like this to keep unpacking the statement ‘engaging the culture, changing the world’ and to ask, ‘What does it really mean?’ and ‘How do we make sure that we are using it and thinking about it in ways that are empowering and life-giving?’”

Hunter’s observations, said Daniels, suggest that “the best way for Christians to engage the world is not by setting themselves up in contrast to the world or in a direct assault on those who have a different view of how the world should be run. Instead, Christians should be a blessing in the context they find themselves, while at the same time maintaining their distinctiveness as a community.”

For Martin, the Symposium brought a renewed focus on the meaning and purpose of SPU’s mission, and prompted discussion that fed into an ongoing university-wide strategic planning process.

“The ultimate purpose of what we’re attempting to do at Seattle Pacific is to help shape individuals who, through the way they live their lives, will in effect change the world,” he says. “In many ways, I think what we’re doing resonates with Hunter’s concept of serving as ‘a faithful presence.’ We want our students to be the presence of Christ wherever they are called, whatever their sphere of influence.”