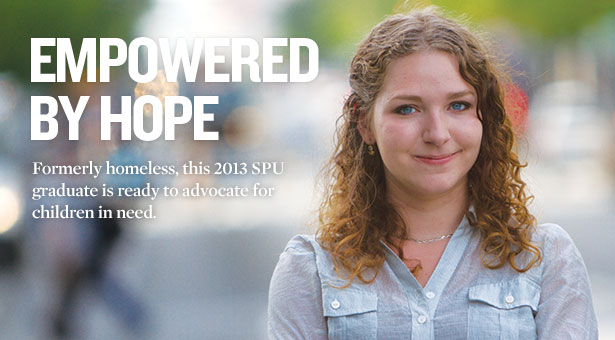 By Richard Seven | Photos by Mike Siegel and Luke Rutan

Throughout high school, Brandy Sincyr ’13 clung onto a few overarching goals. She felt that if she could just graduate from high school, turn 18, and get into college, the uncertainty that dominated her life would wash away, and she’d be safe.

In the meantime, the teenager felt the need to keep secrets.

Only her closest friends could know that she, her little sister, and mother were bouncing between shelters and other monthly or weekly living arrangements and for much of the time, she was alone.

She hoarded her boyfriend’s coat, teasing him that it was a dating ritual when, in fact, she just didn’t have one of her own. Sincyr sometimes dozed in class, abruptly left the classroom (to cry in a restroom stall), and strained to recall where she had left her textbook among the various friends’ homes she stayed at on a rotating basis.

The best thing in her life was attending Tacoma School of the Arts. It provided stability, predictability — and a hot meal. More than anything, it offered hope: a path toward the safety her classmates took for granted.

“I was in a survival mentality,” Sincyr says, peering out a window of the Seattle Pacific University Library. “My faith is what really held me together.”

In June, she graduated from SPU with a political science degree. She not only became the first member of her extended family to receive a college diploma, but she was also the first to graduate from high school.

And she is leaving the University as a different person and with a much broader sense of purpose. She plans to advocate on behalf of the homeless, especially homeless youth. She has already used her experience to lobby, intern with Washington Senator Patty Murray, and connect with agencies and organizations working on the issues.

Sincyr, 22, says she has always sensed the power of politics. Her teen years seemed like one big negotiation. She carried food and extra clothing because she felt the supplies would reduce her burden on people she might have to stay overnight with and they would be more likely to let her stay longer.

She didn’t make excuses at school. She would rather have teachers believe she was an underachiever than know she was living a perpetual scramble. She was careful in what she said so she wouldn’t be split from her mom, Corinne Bidwell, and sister (though the two left the state before Brandy’s senior year) and wind up in foster care.

“I had essentially been forging my own path since I was little and ran into a lot of political barriers,” she recalls. “I had been navigating the system. I was familiar with and mindful of questions like: What can I tell a person without getting myself in foster care? What age am I legally able to be on my own? Is it legal for me to lie about my address on an application?” 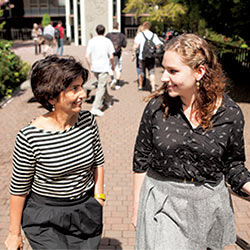 Sincyr chats with Niki Amarantides, director of the Center for Learning, who, Sincyr says, “went way, way out of her job description” to provide academic and personal support.“The faculty and staff at SPU have gone out of their way to prepare me and challenge me and equip me with everything I need,” Sincyr says.

In high school, she started a Christian club that, among other activities, served meals to homeless people in downtown Tacoma. (The irony of the situation wasn’t lost on her.)

When she toured SPU’s campus with a friend and saw a video about Operation Nightwatch, the ministry of alumnus Rick Reynolds ’75 to Seattle’s homeless community, she thought, “Wow, this is what I’m already doing with my life.”

The University’s mission of “engaging the culture and changing the world” seemed to fit with the Christian faith she’d discovered attending First Baptist Church of Puyallup. “Everyone at that church — they lived their faithfulness through service,” she says. So she decided to apply to Seattle Pacific.

She didn’t have an address when she applied, so she put down the address of a friend — the same friend who inspired her to follow through on her goals and apply for college when the time came. It took a dogged effort by SPU admissions counselor Ineliz Soto-Fuller to track her down and give her the news that she had been accepted.

Susan Okamoto Lane, director of Multi-Ethnic Programs, met Sincyr at Early Connections, an orientation for incoming SPU freshmen from ethnically or culturally diverse backgrounds who are likely to experience challenges adjusting to university life. The two hit it off and kept their connection.

“I’ll never forget one of Brandy’s first comments to me was, ‘If I could pass all of my high school classes without knowing where I was going to sleep each night, there’s no reason I can’t do well at SPU,’” Okamoto Lane says.

Professor of Political Science Reed Davis recalls that during his “Introduction to Politics” class the discussion turned to homelessness. Sincyr shared her experience in a matter-of-fact way.

Over the next four years, Davis saw a student who was empowered by her experiences, not stigmatized by them.

“What drives Brandy is her absolute determination to help children who are homeless,” he says. “She talks endlessly about advocacy work. Her ideas range from attorney to social worker, but she is not settled on a career. One constant, however, is children.”

“What drives Brandy is her absolute determination to help children who are homeless.”

In 2010, Sincyr was awarded a scholarship through the National Association for the Education of Homeless Children and Youth (NAEHCY) and traveled to the national convention in Houston with 14 other scholars.

She told her story and made connections with Columbia Legal Services, a Washington state nonprofit law firm that works to protect and defend the legal and human rights of low-income people, including homeless and foster youth.

The same year, Sincyr was selected by Seattle Pacific peers as one of eight “People of Hope,” and became an Early Connections leader and a member of SPU’s Mosaic Club (she was this year’s co-president).

In 2012, she was chosen to participate in the NEW Leadership Institute, an intensive six-day effort to help young women develop skills, prepare for a future in politics, and give them a network with local political leaders.

As part of her NAEHCY scholarship, she traveled to Washington, D.C., last summer and along with other students spoke in government briefing sessions. She met Murray and accepted an internship with the senator. During her D.C. stint, she continued to talk about education barriers that homeless youth face.

“Brandy has all the qualities of a natural leader,” says NAEHCY Director Barbara Duffield. “She loves learning and is intensely curious about the world of politics. She is talented in her ability to express her ideas and persuade others. It was an absolute joy to spend more time with her in what I suspect will be only her first stint in Washington, D.C.”

Sincyr also worked with the Puget Sound Education Service District, promoting the McKinney-Vento Homeless Assistance Act, a federal law that provides money for a spectrum of services for homeless people.

According to federal data, for the first time in history, public schools report more than 1 million homeless students enrolled.

Sincyr hopes her background, college work, and practical experience will equip her to spur progress with the policies behind the massive numbers.

“College has allowed me to take a step back and really look at policies like McKinney-Vento and things like land-use policies that allow shelters. Where can they be? How many beds can they have? How many beds are available in relation to how many are needed? 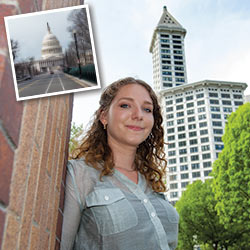 Internships have been a hallmark of Sincyr’s SPU experience — at Columbia Legal Services in Seattle’s Pioneer Square,and in Washington D.C. at the office of  Senator Patty Murray.

“The foster care system not only has funding, but also a social network and support, from the community, like organizational support and scholarships. I’d like to see that for homeless families and youths.”

A university education has given her perspective and confidence, but it hasn’t erased memories.

She still is pained by how her abusive stepfather started the family’s spiral and how her mother — who traveled from Missouri for Sincyr’s graduation — struggled with alcohol. She cringes when recalling “the bad times,” such as when she was abandoned on the side of the road with all her possessions stuffed in a garbage sack.

Her eyes water and her voice quivers when she talks about advocating for innocent kids, accentuating the word innocent.

She says she is learning to be “more holistic,” which essentially means more forthcoming and at ease with her past.

“I don’t tell this story as a poor, sad Brandy story, but as a way to create awareness,” she says.

The most stable housing she had between age 15 and the SPU residence halls was the home of Lucy Carrillo, the mother of Sincyr’s best friend, Kelsie. Carrillo treated Sincyr like a daughter, opening her home during Sincyr’s senior year.

“I was afraid of exhausting their kindness,” she says. She’d received offers to live with other families in the past, but they’d fallen through. “Usually it only took about a week or two before they realized that it wasn’t fun to adopt a fully dependent young kid, and I’d leave or get kicked out.”

But Carrillo, a teacher in Pierce County, proved different. She kept offering her home to Sincyr during breaks in the SPU schedule. She calls Sincyr “a scrapper” who grew into a “socially aware young woman who beat all odds.” A few months ago, Sincyr wept with joy when Carrillo told her that she would always have a place to sleep, an attic to store her possessions, and an address. 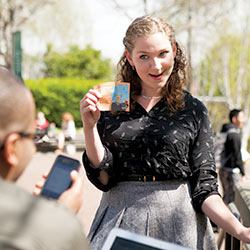 It seems the mailing address made the biggest impression. What would seem to strike most of us as a nuance provided Sincyr with tangible relief.

“Homelessness is more than not having a roof over your head,” she says. “It’s a feeling, too. Having a home is a mindset. Everyone is more comfortable when they know they have a family, a bed — and an address.”