recently selected SPU for its Guide to 311 Green Colleges: 2011 Edition. 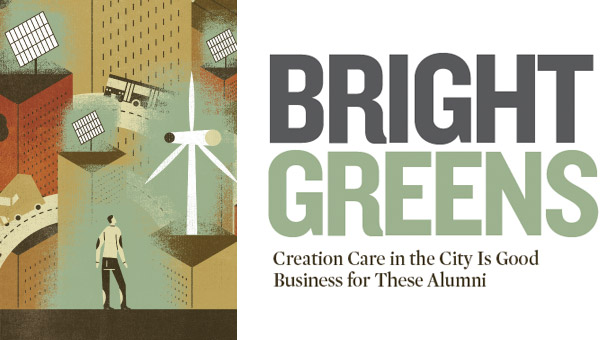 There had to be a better way. Lumper, a 2000 Seattle Pacific University graduate, grew up recycling at home in Kennewick, Washington. Why couldn’t SPU do the same? She put the question to Dave Church, assistant vice president for facility management. He responded by offering her a job overhauling the campus recycling program. She set to work mapping campus dumpsters and measuring waste by volume. In 1999, Seattle Pacific recycled 15 percent of its waste; now 67 percent is diverted from the landfill.

Amity Lumper’s work caught the eye of Cascadia Consulting Group, a Seattle firm that advises city governments and businesses about environmental practices. She took a job with the company after graduation, starting out by riding on garbage trucks to understand the variations in waste for different kinds of businesses. She’s stayed with Cascadia for 10 years, becoming a senior associate and minority owner. She’s worked with some of its biggest clients: Home Depot, Starbucks, Adobe Systems, and the cities of New York and Houston.

She’s one of a number of alumni combining an entrepreneurial spirit with a conviction that living faithfully means taking care of the created world. Their work takes place not amid wilderness and wildlife, but in the thick of human life — often in the heart of the city. These graduates are at home in the marketplace, harnessing innovations in technology and design to improve everyday living. Their stewardship is not about cold showers and sitting in the dark but about finding cleaner and more efficient sources of heat and light.

As an electrical engineering major, Dana Brandt ’01 worried about entering a life of drudgery designing disposable gadgets. “Honestly, I was pretty terrified at the prospect of living in a cubicle designing something inane,” he says. “But I didn’t know what else to do.”

These graduates are at home in the marketplace, harnessing innovations in technology and design to improve everyday living. Their stewardship is not about cold showers and sitting in the dark but about finding cleaner and more efficient sources of heat and light.

That changed on a summer SPRINT trip to Belize after his junior year, when he was able to help jungle villages plan for solar installations. “I got excited about being able to use my degree — to help people and bring power to people that don’t have it,” he says.

He returned to campus to take “Alternative Energy Systems,” the school’s first class in renewable engineering, with Associate Professor of Physics John Lindberg. That led to another SPRINT trip, this one as a leader, to work on wind­energy projects in the Dominican Republic. He then went to Germany and England to earn a master’s degree in renewable energy.

When he looked for renewable energy companies in Washington state, hoping for a job, he couldn’t find any. So he started one in 2004: Ecotech Energy Systems of Bellingham, Washington.

Ecotech helps homeowners and businesses add rooftop panels, showing customers that solar can pay off even in the gray Northwest. Every spot on Earth spends exactly half the year in daytime and half in nighttime. Washington’s long, frequently sunny summer days balance out the cloudy winters. Solar arrays take about 10 years to earn back their upfront cost, Brandt says. But they typically last more than 30 years, providing several decades of essentially free electricity.

In June 2010, Ecotech installed the solar array — originally designed by Kenzie Brister ’09 as part of her senior honors project — on SPU’s Otto Miller Hall. Brandt also worked to bring solar to an affordable housing project on Lopez Island, where the upfront investment in local energy will allow low-income residents to save money on utility bills for 30 years.

Undergirding these projects is a belief that biblical stewardship means caring for human communities along with wild places. 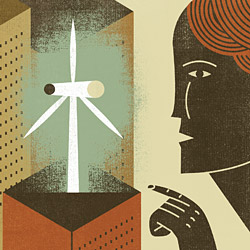 “I’ve found that my faith in Christ only makes the concept of sustainability richer,” says Matt Basinger ’03, who is earning a doctorate in earth and environmental engineering at Columbia University in New York City. Basinger has combined energy technology with information technology on a string of projects. This fall in Mali he launched the first pilot for a project called SharedSolar to bring solar power to remote villages through the cell-phone infrastructure that has proliferated in Africa. Farm workers can prepay for only the service they need, making power more affordable for those who’ve never had access to a city electrical grid. The project helps locals earn a living without leaving their home communities. That helps not only those villages, but also the African cities straining from widespread urban migration. Basinger says his faith motivates this work. “I found that I was not trying to realize ‘sustainable development’ as a goal in and of itself, but that I was motivated by Christ’s calling to serve the poor and to care for his creation.”

Creation care also inspires Amity Lumper as she works with cities and urban businesses. “We’ve been entrusted with creation, which is big and highly complex,” she says. “It’s about caring for the non-human — and human — world.”

There’s another economic benefit of stewardship, according to Lumper: Companies with reputations for responsible practices have an easier time recruiting and keeping workers. “That’s probably one of the biggest cost savings,” she says. “It’s very hard to measure, but talented, dedicated, savvy employees tend to care about these issues. It’s not just the environment, but social issues as well.”

Connecting the City With the Wild

Although a business field such as renewable energy may seem far removed from wilderness, Ben Warren ’06 finds a meaningful link between the two. He works in Seattle for the Norwegian company DNV Renewables, analyzing data to find sites that are suitable for wind-energy farms that help power cities.

He discovered that he wanted to work in renewable energy while hiking through California’s Mojave Desert on his honeymoon in 2008. The way to protect the wilderness, he concluded, was to work among people, bringing clean energy to the cities and towns that needed it.

“I feel closest to God when I’m outside,” he says. “So anything I can do to preserve what we haven’t already destroyed is an important aspect of what I do.”

Jonathan Hiskes is a Seattle journalist who writes about urban issues, clean energy, and anything else that catches his interest for Sustainable Industries magazine.