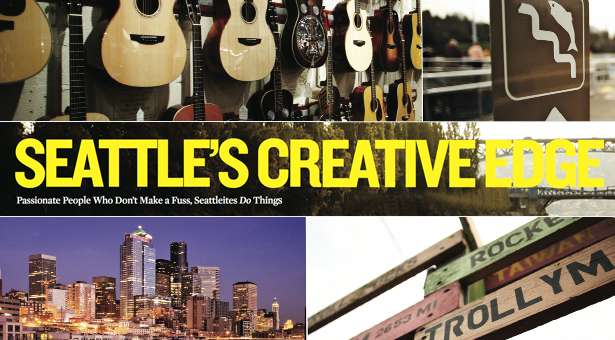 By Richard Seven | Photos by Nick Onken and Luke Rutan

Several years ago, I met a young Taiwanese man who moved to Seattle and helped create a social club that took on community projects. It was, he told me, the best way to get to know people in this city that he found aloof.

He called us “polite, but not friendly.” I had heard that sentiment many times, so I pressed him to explain.

“If you’re with a friend in L.A.,” he said, “and he runs into a bunch of his friends who talk about going skiing that weekend, it won’t be long before they say to you, ‘Hey, you should come along.’ In Seattle, they say,‘We’ll show you the pictures when we get back.’’’

I often think about that exchange and what it told me about Seattle. I wasn’t impressed by a newcomer struggling to feel at home — that happens everywhere. I was impressed that he did something about it.

Looking back, after 25 years of reporting and writing for The Seattle Times, I realize I have witnessed similar feats of initiative many times. People here do things. They create the Seattle they want or find a way to do what they want while living “way up here.”

Easterners derisively call us “South Alaska.” Writers who parachute in for quick travel stories think we’re all Space Needle, coffee shops, and rain. They call us “bookish,” as if that’s a bad thing, and claim we are all clad in water­resistant parkas. When a TV character is written off a show, he or she “moved to Seattle” — a fairly cool place, the show might suggest, but one that is far, far away. He or she will never be seen or heard from again, perhaps victim of a serial killer — or maybe vampire — believed to lurk about our soggy firs.

I’ve never met a vampire, but we do have our share of knuckleheads, civic gridlock, and growing pains. Why can’t a clear vision of civic leadership soar from our considerable collective brain power? How can we create a workable transportation system when we can’t keep up with patching the potholes? And when will condos stop sprouting like dandelions in spring?

Still, after all this time of prying into the corners of this city and state, I have faith. I’ve come across geniuses, crusaders, artists, outdoorsmen, athletes, inventors, activists, and plenty of alternative lifestyles. I’ve walked into mansions and floating hovels. I have met the famous, the recluse, and the odd.

If I had to lump all these Seattleites together, as my Taiwanese friend did, I would call them friendly enough, just not effusive. Mainly, they have all been passionate people who didn’t make a fuss about it.

And of all those people, it is Kevin Li I will remember most.

Each spring, in Seattle and around Puget Sound, Li hung gourds that served as homes to purple martins. Each gourd had a single round hole, about half the size of a fist, which was small enough to prevent competing birds such as house sparrows and starlings from horning in on the territory.

Seattle’s purple martin summer popula­tion used to number in the thousands, but it had dwindled to nearly nothing by the late ’80s. So Li, a King County environmental scientist, worked on his own time to bring them back each mating season.

One blustery spring morning, as the tide was out, I held the ladder, and he climbed near the top of rotted pilings at Shilshole Bay. He was about halfway finished hang­ ing his seven gourds when he scanned the horizon and said, “You hear that? That’s a purple martin.”

Sure enough, a single male looped around the pilings a few times before disappearing as suddenly as he had arrived.

Li continued hanging the gourds onto stakes poking from dilapidated wood, but before he could finish, the site was flush with purple martins — squawking, perching, and poking their heads into the gourd holes. When a crow lumbered into the airspace, they joined forces to chase him away.

In the span of an hour, Li had transformed desolation into home. I was stunned at how fast it had unfolded, how the birds had been waiting for Li to come through and provide summer accommodations. A resident of a nearby townhouse came outside to thank him for doing it each year, but Li was uneasy about accepting attention. He loved wildlife and purple martins. Nobody else seemed to be helping them, so he did.

He died while scuba diving less than a year later at age 50. I visited his home office and found it filled with information and maps of where he had installed purple martin homes.

That next spring, his friends, and others who had never even met him, banded together to hang the houses in his memory. Another Seattle thing to do, I thought.

There have been many other “Seattle” moments:

I watched Grammy-winning jazz guitarist Bill Frisell synchronize his electronic squeaks and squonks with the bizarre animation of alternative comic artist and fellow Seattleite Jim Woodring. Despite virtuoso talent, Frisell loves being the sideman, melding his guitar with African chanting or Elvis Costello’s crooning or the Nashville steel twang.

I experienced how Seattle sculptors Marvin Oliver and Tony Angell infuse life and style into raw material. Oliver, a Native American, melds his culture and tradition with contemporary design in glass, like the giant orca piece that hangs in Children’s Hospital. Angell is a naturalist who finds wildlife images by pounding and chiseling huge blocks of stone.

I tried to keep up with Yoky Matsuoka and Trish Millines Dziko. When professor and researcher Matsuoka is not trying to build the world’s most capable robotic hand inside her lab, she tries to persuade girls that it is cool to be a scientist. Dziko, a housekeeper’s daughter, left Microsoft a decade ago to set up the Technology Access Foundation, which strives to improve public education for kids of color.

I quizzed musician and craftsman Dave Bunker about the decades he spent perfecting his double­necked guitar he calls the “Duo­Lectar” and Bruce Bickford about the painstaking patience it takes to create his mind­blowing stop­action movies, starring clay miniatures, that he calls “versatile reality.”

And there were many others:

If I had to stereotype based on my sample, I’d argue we are more obsessed than aloof. Americans have been moving west to start anew for hundreds of years, and we’ve stationed ourselves way into the very corner, shoved up against the ocean. We can’t afford to wait for sunny days. We go and do, rain or shine. If you want to come along, we’d likely say fine, but it’s up to you to show interest.

I’m willing to guess that most of us, like Li, would rather blend in while we’re standing out. Perhaps that is why many of us still shudder about the 10­year­old multicolored blob known as Experience Music Project even though it is meant as homage to Seattle’s Jimi Hendrix and his outrageous creativity.

We’re evolving, of course. During the past quarter­century, I’ve seen Microsoft go from shooting star to old warhorse, and Starbucks and Amazon progress from “What?” to “Wow.” I saw Pearl Jam’s clubhouse get mowed down to make way for another South Lake Union steel­and­glass corporate box.

As we get more crowded and harried, maybe we get more aloof, but Seattle is still powered by strong, self­sufficient neighborhoods and a core ethic that pushes us to fit in with our environment, not pave it flat.

And we are not all serious, either. In fact, we have a decidedly off­kilter sense of humor. How many cities have a gum wall (Pike Place Market) or a troll (Fremont)? Several years ago I was forced to come up with a fake story for April Fools’ Day. I rebelled. I never find fake stories funny, no matter the publication date. I decided to write a real story that everyone would find ridiculously unnecessary.

So I set out to locate the exact geographical center, the very belt buckle, of Seattle’s hourglass figure. I found no shortage of people — the engineering sorts I least suspected would cooperate — who helped me measure, number­crunch, and opine, even as they snickered about my ambition.

Eventually, through exact measurement and pragmatic negotiation, I proclaimed that the geographical center of Seattle was about one block from my desk at the Seattle Times building.

A few years later, someone imbedded a plaque into the western sidewalk of Minor Avenue North between Thomas and Harrison streets — the very spot — commemorating my guess. I know it’s not much, but it’s my contribution. I still steer friends past it and say, “Hey look!”


Richard Seven is an Oregon native and a lifelong Northwest resident. He has spent most of his career at The Seattle Times as a feature writer.