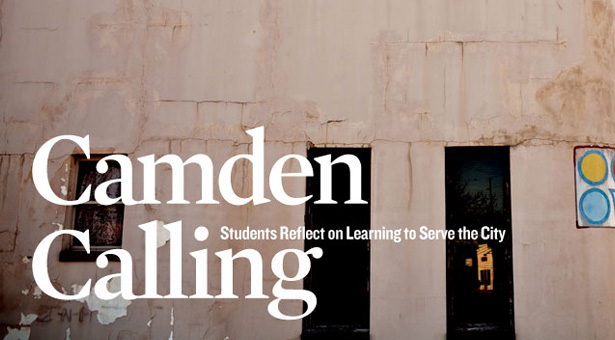 Rather than go home at the close of Autumn Quarter, five Seattle Pacific University students took a seven-hour flight east. Their ultimate destination? UrbanPromise in Camden, New Jersey. Sent out by SPU’s John Perkins Center, they spent 12 days learning something of what it means to be an urban leader.

“This trip gives students an opportunity to see poverty and urban issues from a new perspective,” says Owen Sallee, Seattle Pacific’s coordinator for global and urban development. “Interacting with UrbanPromise staff — people who have dedicated their lives to working in Camden — allows them to consider how they might invest their own lives in community-development work.”

A thriving industrial city until the 1950s, Camden showed clear signs of urban dysfunction by the 1970s: high crime, poor schools, racial tensions. In 1988, UrbanPromise began serving area youth with a K–12 Christian CamdenForward School, after- school programs, summer camps, art camps, and other offerings. For two weeks in December 2010, SPU students Rebecca Gonzalez, Kirsten Jones, Chris Kyle, Olivia Lenz, and Lauren Oglesby experienced that work firsthand. Throughout the trip, they journaled about what they saw and did. Here are excerpts from their writings:

"My mom asked me last night why I was going on this trip. Honestly, I am not sure, except that I felt an unexplainable desire to go, serve, and learn. I don’t expect to radically change the lives of the students and teachers that I meet. Instead, I hope that I can learn from them. I also go to serve the servants, to give them an extra set of hands and feet as they serve the students of Camden."

“We were taken to a park near one of UrbanPromise’s after­school program campuses. I seriously think this is what got me the most. It’s fenced. Here’s why: Right next to it, on the same property, is a sewage plant. A sewage plant next to the park. This sewage plant supports at least 15 different cities, and all the waste goes to Camden. It was done in an effort to salvage the Delaware River from contamination. Right. Save the river, and pollute the air the people in Camden breathe. I just can’t understand why such an act could take place. I’m not a person for politics, but now I see the importance of knowing what is going on around me so that I can speak out and do something.”

“I spent much of my time with the music teacher, getting to see firsthand the talent and beauty of the kids, as well as the difficulties of teaching fine arts with very limited resources. It is humbling and scary and exhilarating to find yourself in front of 20 seventh graders who look at you with half­bored, half­curious expressions that practically scream: 'What does learning the pattern of whole steps and half steps that comprise a major scale have to do with my life, Miss Lauren?'” 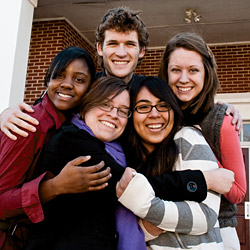 "We met workers from other ministries helping to improve the city, including Heart of Camden. Heart of Camden renovates old houses and makes them into beautiful homes that are also affordable housing. With these houses, the streets are beginning to look nicer. At the Center for Transformation, Andrea Ferich, the Center’s sustainability director, started a garden to teach children about growing fruits and vegetables. In the spring, they sell their fruit and vegetables at the Camden farmers market. This allows students to feel successful — they gain a new outlook on the types of things Camden can produce. Andrea is also passionate about art. She and volunteers create art on abandoned and boarded­up buildings in the city. Adding bold, bright, and beautiful colors to the doors, the artwork has encouraging mes­ sages and stands out in the community. Art is powerful and makes a difference in this environment."

"I came on this trip anticipating I’d learn a little about “America’s Most Dangerous City,” and I’d eat nothing but junk food, since there is only one grocery store within the city’s limits.

But I found something drastically dif­ ferent in Camden. My perception of what it means to be a Christ follower now transcends daily prayer and Scripture reading, avid church­going, short­term mission­ tripping, socially responsible shopping, homeless ministry serving, and everything else I once considered “enough” for my faith.

I suppose I need to coin a term for such a discovery. How about “irrevocable generosity”? We see this in the lives of Paul, Mother Teresa, and other Christian leaders. They gave up everything to pursue a life worthy of Jesus. I met a few of these kinds of people living in Camden, ministering to others at the expense and sacrifice of their own time, money, dreams, and passions.”