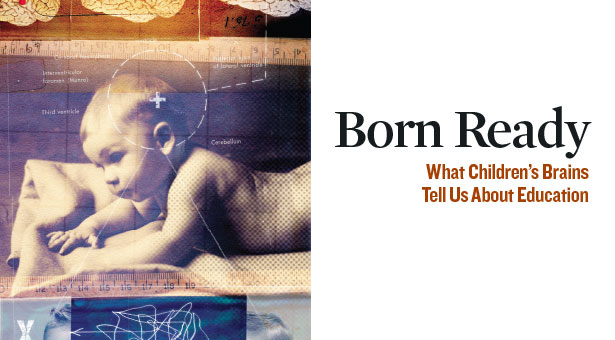 Want to improve American schools? A 10-second event in the life of a Seattle toddler holds the key.

A little boy, 24 months old at the time, was busily playing on the floor, but plans were building in his head like an approaching squall. He suddenly looked up at his mother and said solemnly:

“You don’t know the power of the dark side. Join me, and together we can rule the galaxy!”

The little guy gazed at his mother intently, expectantly, waiting for a reaction. He got one, her laughter in gale force, exactly what he was seeking. Or better, forecasting.

Heavy lifting for a 2-year-old, for sure. But understanding the information-processing features of the human brain — best seen in children — provides important clues about how we should teach them.

In my scientific career, I have often been asked if any connective tissue exists between the vast fields of education and brain science. I am usually pretty skeptical, because our understanding of the brain is too limited, and the field attempting to bridge the two too new. And most research universities have an institutional estrangement between their colleges of education and their brain science units.

I am grumpy, but I am not pessimistic. The little research that has been rigorously done tells us there is much gold to be mined by breaking through the disciplines. After all, at the end of the day, education is about brain development.

So what are the cognitive gadgets with which we are born?

When it comes to information processing, we used to think babies came with nothing more than a tabula rasa, or blank slate. But researchers such as Andy Meltzoff and others showed the opposite: that babies were born with lots of pre-loaded “learning software.”

Meltzoff’s seminal experiment involved sticking his tongue out at a baby not even 42 minutes old — and, to Meltzoff's great delight, watching the baby return the favor.

We now know that infants are born with delicately calibrated pre-set circuits for many kinds of higher-level information processing. This learning software may be every bit as fully formed at birth as knowing how to breathe.

So what is in the infant software learning kit? One consistent finding appears to involve hypothesis testing. Babies seem to use a series of increasingly self-corrected ideas to figure out how the world works. That correction involves active testing of their environment, much like a scientist would, and in a familiar four-step pattern.

A scientist makes a sensory observation, fashions a hypothesis about what is occurring, designs an experiment capable of testing the hypothesis, then draws conclusions from the findings. Small children — even infants — use a similar strategy.

To illustrate, let’s return to the two-year old Star Wars fan, but slow things down a bit, watching from a researcher’s perspective.

The little fellow made a sensory observation: “Mom gives me attention when I quote Star Wars.” He then hypothesizes, “I bet if I imitate Darth Vader, Mom will react. I bet she laughs.” He then deploys the experiment, uttering his Star Wars quote. Finally he sits back, examining his results, wondering if the hypothesis worked. It is extremely sophisticated stuff, and to this day we do not understand the neurological machinery undergirding it.

Nobody teaches kids how to do this. You can actually observe this strategy in preverbal infants all over the world. They are, indeed, natural scientists.

Does this have anything to say to our education system? It ought to. Given that kids are already equipped with the necessary machinery at birth, it seems clear that active, hypothesis-driven learning environments should be a normal part of a child’s education.

We should be investing research dollars into understanding how — and which — classroom environments best aid the natural exploratory tendency in children. This will require the education and brain science communities to work together to conduct multiple, massive, randomized, blinded trials capable of telling us what discovery styles actually work for kids.

It is in the mind of a 2-year-old that I find my greatest hope for education. The youngest children are already learning, as little Darth Vader clearly illustrates. We just have to be smart enough to follow their lead.

John Medina is director of the Brain Center for Applied Learning Research at Seattle Pacific University and the author of Brain Rules, a New York Times best-seller, and Brain Rules for Baby. He explores the marvels and mysteries of DNA and human behavior in his blog, “Brainstorm,” at spu.edu/brainstorm.