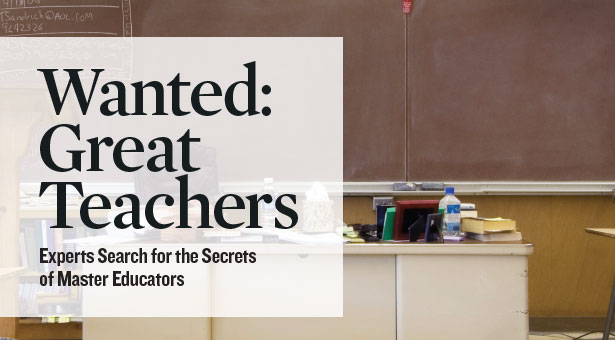 Think back to your best teachers — the ones from whom you learned the most. Chances are, they knew a lot about the subjects they were teaching. They were well-organized and could hold their students' attention. But what else made them great?

It's possible — probable, even — that the two most effective schoolteachers you ever had approached their jobs quite differently from one another. Maybe one was easygoing, the other strict. One asked you questions about your hobbies, and the other only asked you about algebra.

It's also one of the most important. An endlessly repeated sound bite in the current debate on education reform is that more than anything else that's been measured inside a school, the quality of teachers matters. According to the research of Stanford University economist Eric Hanushek, from September till June a student can learn an entire year's worth more of material from a top-tier teacher than from a bottom-tier one.

Irvin Scott, deputy director of education at the Bill & Melinda Gates Foundation, says that everyone can explain how a given teacher impacted them, but our explanations for why that is so — based as they often are on emotion and nostalgia — aren't enough.

“If effectiveness of teachers is so critical to people's life chances,” Scott says, “then we need to stop relying on what people feel, and come up with a more definitive answer about what good teaching looks like.”

Michaela Miller is wholly invested in crafting that answer. Miller, who received her principal certification from Seattle Pacific University in 2009, is directing a pilot project in teacher evaluation for Washington state's Office of Superintendent of Public Instruction. For decades, teacher evaluations have been famously limited in utility. They come infrequently, they include little meaningful feedback, and they typically conclude that everyone's fine. (According to “The Widget Effect,” a 2009 study by the New Teacher Project, fewer than 1 percent of teachers in 12 districts studied — some of which had terrible student outcomes — were rated unsatisfactory.)

In Washington's pilot, 15 districts are using a more thorough teacher evaluation tool based around specific practices considered crucial for good teaching. For example, teachers are judged on the kinds of questions they ask students. It's not enough to ask kids to parrot knowledge; great teachers require them to think critically and apply it. 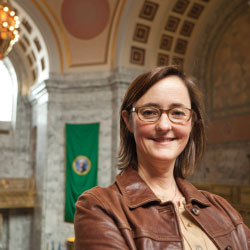 Michaela Miller, who is working to improve teacher evaluations in Washington state, says her SPU professors helped her understand how to build consensus for change — to "develop deep relationships with staff, with the school, and with
the community." Photo by Luke Rutan.

The hunt for empirical evidence of good instruction is also at the heart of the Measures of Effective Teaching, a $45 million Gates Foundation effort. Researchers in seven urban school districts around the country are examining everything from videotaped lessons to student surveys to student work (test scores and more) in order to determine what qualities and approaches are shared by teachers whose students improve.

Once the elements of good teaching are identified, the next step — not just for districts in the Gates pilot, but for all those that are working on improving teacher quality — is to use that knowledge to help teachers grow. Right now, few school districts base their professional development for teachers on individuals' specific deficiencies, but many hope to do so.

“This work has the potential to change the teaching profession for a long time to come,” Miller says.

Despite those efforts, there's a lot of pressure to judge teachers primarily on one measure: their students' improvement — or lack thereof — on state tests. Some states have begun to base 50 percent of a teacher's evaluation (and resulting merit pay) on those tests.

David Denton, an assistant professor of teacher education at SPU, says that student test
scores “have a place in the educational system. But they're only one type of measure of the
types of learning humans are capable of.”

Basing a teacher's worth on quantifiable measures of student growth, he says, may fail to account for many variables that impact teacher quality, including the amount of time teachers have to plan lessons, the number of students in their classes, and the complex social needs of their students.

To see if teachers are effective, Denton argues, we should also be looking at whether they are instilling a love of the subject in students, and whether their students are developing creative abilities.

Ask Jay Maebori, a high school English teacher in the Kent (Washington) School District who received his master's degree in teaching from Seattle Pacific in 2003, what makes a good teacher, and the primary attribute he names is “a willingness to want to grow.” Maebori, who was named Washington State Teacher of the Year in 2011, also says that it's crucial to connect with students as human beings, to engage them based on their own expertise and interests. At year's end, he
says, he hopes that they think, “He cared about his subject matter, but he didn't care about his subject matter more than he cared about me.”

Aspiring teacher Megan Holter, a senior at SPU, completed her student teaching this winter in a Seattle elementary school. One thing she noticed about great teaching: Every time she saw a group of students who seemed productive, it was led by a teacher with excellent classroom management skills. This looked very different from teacher to teacher: One was firm, with students working in their desks quietly; another had the kids moving around and working in groups, but always
with purpose and order.

“It was a combination of what [approach] the teacher felt most confident with and what the kids in that particular class needed,” Holter says.

It's clear to her that if she is to be a good teacher, she'll have to find the right balance for her — not just in whether her students are sitting or moving around, but what they need from her each day.

“The further into my student teaching I got, the more I could read the kids and adjust to what they needed,” she said. “But that's something that's going to take a lot more than 20 weeks to master.”

Of course, the core of teaching is making sure students are learning the subject matter. But, Holter is coming to understand, some kids need more than that: to learn manners, to feel safe, to enjoy going to school. A good teacher, she says, teaches character — in ways that no test can measure.

Linda Perlstein, a freelance editor and writer based in Seattle, is the author of two books, Tested and Not Much Just Chillin'.