“We're big players in creating more able teachers and school administrators, and meeting the changing needs of our schools,” says Eigenbrood, an examiner for NCATE, the professional accrediting organization for schools, colleges, and departments of education in the United States.

From its infancy, teacher training at Seattle Pacific showed an uncommon ability to educate educators. In 1921, the Normal Department began with formal curriculum, facilities, and professors. It had been one of President Orrin Tiffany's primary goals and helped Seattle Pacific make its first significant reputation within the region. Ably organized and directed for the next 19 years by Candis Nelson, the teacher training program saw rapid progress. So much so that in 1922, a joint committee from the University of Washington and the State Department of Education voted for its formal accreditation. 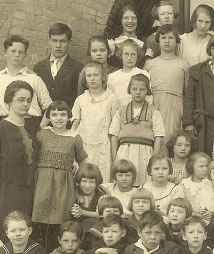 Students and teachers of Seattle Pacific's Normal Training School in 1924, three years after its founding. Photo courtesy of the Seattle Pacific University Archives.

Outstanding longtime programs such as school counseling have thrived, while newer strategic programs such as science education, global curriculum studies, and alternative routes to certification have grown in prominence. Embracing change and producing qualified teachers for hard-to-fill positions explain the dramatic shift from teacher education firmly rooted at the undergraduate level for the first 70 years, to today's program, where more than half of those recommended for teaching certificates have completed a master's degree program. A few highlights of the School of Education's programs:

In part, the School of Education is recognized as one of the premier teacher preparation programs in the state because of programs such as school counseling. In 2012, the School Counseling Program's 50th anniversary year, the Washington School Counselor Association gave three of their eight annual awards to Seattle Pacific, honoring Professor of Education Chris Sink, Instructor of Counselor Education Richard Cleveland, and graduate student Kaley Mitchell.

Founded in 1993, the Center for Global Curriculum Studies makes possible international connections through travel, writing, and research for School of Education faculty and graduate students. It has aided independent study at institutions and attendance at international conferences in countries such as China, Russia, Spain, and the United Kingdom, as well as sponsored scholarly visits to SPU from educational leaders abroad.

“We're producing about 35 science and math teachers a year, high for an institution of our size,” says Eigenbrood. In 2011, SPU became the first in the state to offer a master's degree in teaching math and science, a teacher training program specifically designed to produce strong elementary and high school teachers in these disciplines.

“In several school districts where I've worked, SPU applicants make desirable employees,” says Steve Bodnar, superintendent of the Centralia School District. “Their pedagogical skills include the ability to work with diverse groups of students. They have a sense of purpose and deep commitment to the lives of young people.”