An Excerpt From The Pastor: A Memoir by Eugene Peterson 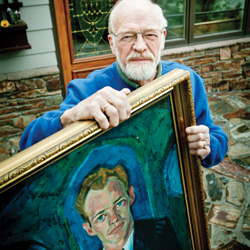 Haunted: Peterson keeps a "prophetic portrait" of the pastor he did not want to become.

In chapter 19 of his memoir, Eugene Peterson writes about his time as a theology student in New York City. Employed by a Presbyterian Church to work with a group of young adults — who were mostly artists — Peterson had an encounter with an artist that shaped his pastoral vocation.

Willi Ossa was an artist, the first artist I had ever known personally. … Willi was the church janitor. But janitor was not who he was. Janitor was his job. He himself, Willi Ossa, was a painter, a serious painter. He painted mostly on canvas with oils. …

Willi had a severely negative opinion of the church. "Severely negative" is an understatement. It was outraged hostility. He had lived through the war and personally experienced at close quarters the capitulation of the German church to Hitler and the Nazis. His pastor had become a fervent Nazi. … He couldn't understand why I would have anything to do with church. He warned me of the evil and corrupting influence it would have on me. He told me that churches, all churches, reduced pastors to functionaries in a bureaucracy where labels took the place of faces and rules trumped relationships. He liked me. He didn't want his friend destroyed.

And then he began painting my portrait. He said he wanted to work in a form that was new to him. But he would never let me see what he was painting. …

One afternoon Mary [his wife] came into the room, looked at the nearly finished portrait, and exclaimed "Krank! Krank!" I knew just enough German to hear "Sick! Sick!" In the rapid exchange of sharp words between them, I caught Willi's "Nicht krank, aber keine Gnade" — "He's not sick now, but that's the way he will look when the compassion is gone, when the mercy gets squeezed out of him."

A couple weeks later the portrait was complete and he let me see it. He had painted me in a black pulpit robe, seated with a red Bible on my lap, my hands folded over it. The face was gaunt and grim, the eyes flat and without expression. I asked him about Mary's Krank. He said that she was upset because he had painted me as a sick man. "And what did you answer her?" He said, "I told her that I was painting you as you would look in 20 years if you insisted on being a pastor." And then, "Eugene, the church is an evil place. No matter how good you are and how good your intentions, the church will suck the soul out of you. I'm your friend. Please, don't be a pastor."

His prophetic portrait entered my imagination and has never faded out. But I didn't follow his counsel. Eventually I did become a pastor. But I have also kept that portrait in a closet in my study for 55 years as a warning: Willi's prophecy of the desolation that he was convinced the church would visit on me if I became a pastor.

I still pull it out occasionally and look at those vacant eyes, flat and empty. The face gaunt and unhealthy. Willi's artistic imagination created a portrait that was far more vivid than any verbal warning. The artist has the eyes to connect the visible and the invisible and the skill to show complete what we in our inattentive distraction see only in bits and pieces.


From The Pastor: A Memoir. Copyright © 2011 by Eugene H. Peterson. Reprinted with permission from HarperOne, a Division of HarperCollins Publishers.