From opposite borders of the country, SPU alumni Juanita Alcaraz and Mikel Thompson not only found each other and married, but found a passion for using robotics to instill science, technology, engineering, and mathematics (or STEM learning) in children as young as kindergarten age.

Juanita '83, M.Ed. '10, was raised in Southern California by Mexican parents. Mikel '82, M.A. '07, was born in Montana, raised by Norwegian parents, and joined a long family line of educators.
Together, after 32 years of marriage, the Thompsons have become champions of classroom innovation at private King's Schools in Seattle, Washington. In February, they were named the Washington Federation of Independent Schools Teachers of the Year.

Strong believers in uniting technological innovation and the Christian faith, the Thompsons found that robots, and competitive robot challenges, were an ideal focus for exciting kids about learning and for using both left- and right-brain reasoning. 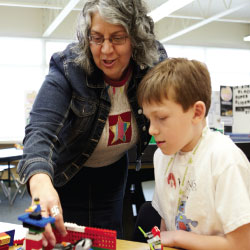 This year, for “Snack Attack,” the K–3 teams built Lego models demonstrating different aspects of creating healthier “munchies.” Their working models utilized battery-powered motors. In “Food Factor,” focused on cross-contamination of the food supply, the 24 robotics students in grades 4–6 designed, built, programmed, and tested an autonomous robot that performed a series of tasks or missions in under two and a half minutes. Students learn creative problem-solving, cooperation, critical thinking, research, and presentation skills.

“It's going gangbusters,” says Juanita, who fielded four teams out of the 31 that competed at a robotics exposition this spring at Seattle's CenturyLink Field. “I get to both feed my husband's high school robotics program and encourage more girls to participate.” She hopes that starting girls younger will net more female scientists and engineers of tomorrow. This summer, she hosts a robotics camp for girls only.

Robotics, a varsity sport at King's High School, is supported by school cheerleaders. In its inaugural season, the school won the Northwest Regional Robotics Championship and placed in the world's top eight. This year they competed at the FIRST Tech Challenge Robotics World Championship in St. Louis, Missouri, April 25–28, 2012, and placed in the world's top four teams.

Mikel, who launched the robotics program in 2009, enjoyed a 17-year career as a software developer before earning teaching credentials. “At SPU, I learned best classroom management practices and that teaching was my way to impact the world,” he says. “Robotics supplies both the platform and the fun factor.”

Students who may not excel at more traditional “after-school” activities such as athletics find robotics especially meaningful. “It provides deeper learning,” says Mikel. “Most kids hit high school in SAT mode and aren't used to problem-solving that takes days or weeks, or that only comes through collaboration.”

And that's what energizes the Thompsons. “We want students to develop character and compassion as they interact with each other and their competitors,” says Juanita. “We want to show the secular world that you can be a Christian and technically savvy,” adds Mikel. “We're training a cadre of young people who can drive change and be at the top of the industry."

Advocate for Students in and out of School

Let the Robots Take Over

Connect the Classroom With District Progress