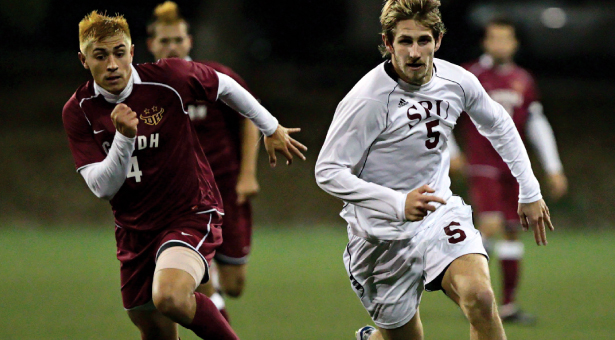 Five different sports. Five spots in NCAA West Regional competitions. That’s the kind of a
successful fall season it was for Seattle Pacific University sports teams. Taking a look back:

Men's Soccer
Not since 2006 had Seattle Pacific’s men been part of the NCAA playoffs. That dry spell ended when the Falcons hosted West Regionals at Interbay Stadium. They scored a dramatic 2–1 overtime victory against Cal State Dominguez Hills in the first round before Cal State Los Angeles escaped with a 3–2 victory in the regional finals two nights later.

Women's Soccer
The Falcons made it nine straight years of qualifying for regionals. This time, they traveled to Los Angeles, where they routed Grand Canyon in the first round, 4–0, before falling 2–1 to Cal State Los Angeles. SPU finished 17–3–0, and won the GNAC title for the third straight year, this time at 13–1–0.

Volleyball
Seattle Pacific won its second consecutive GNAC title, this one outright at 15–3, and played at regionals for the third straight year — a school record. There, the Falcons rallied from two games down before falling to Brigham Young Hawaii in four games, finishing at 21–7

Chris Johnson was GNAC Coach of the Year, and senior outside hitter Lindsey Wodrich was a unanimous All-GNAC selection. Record-setting senior libero Anna Herold and junior setter Shelby Swanson were first-team for both All- GNAC and Daktronics All-Region.

Men's Cross Country
The Falcons won their first three meets, sweeping two in Alaska and then taking the Apple Ridge Run Invite in Yakima. The following weekend, they ran to a school-record fifth-place finish at the Sundodger Invitational.

After placing sixth at the GNAC Championships, the Falcons went unranked into regionals in Spokane. But they put together one of their strongest performances of the season, finishing seventh and beating three regionally ranked teams.

With a solid senior combination of Natty Plunkett and Heidi Laabs-Johnson, SPU ran strong from the opening strides to the final ones, finishing second in their first three meets, then placing seventh among 17 teams at Sundodger. At the NCAA pre-regional meet in Spokane, Plunkett finished eighth and was the first Division II woman across the line. The Falcons placed sixth at     GNAC Championships and sixth among 24 teams at regionals.