By Jeffrey Overstreet (jeffreyo@spu.edu) | Illustration courtesy of The Secret of Kells 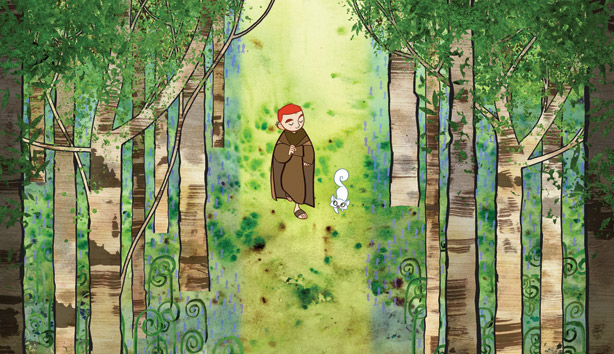 Young Brendan and Pangur Bán journey into the forest, which the animators of The Secret of Kells illustrated to resemble a medieval cathedral.

I and Pangur Bán my cat,
Tis a like task we are at:
Hunting mice is his delight,
Hunting words I sit all night.

So begins an Old Irish poem from the ninth century. Some say it was penned by a monk who worked on the Book of Kells — that illuminated manuscript considered by many to be Ireland's greatest treasure.

Now Pangur Bán has his own movie. He slinks through the scenes of The Secret of Kells, bringing characters together, leading the way to secrets, and stealing the monastery key. He's just one of many wonders in this extravagantly beautiful animated feature that was recently released on DVD and was nominated alongside Pixar's Up for the 2009 Best Animated Feature Oscar. 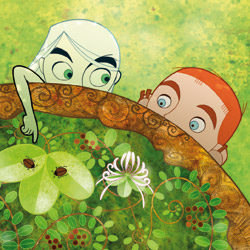 The film introduces Brendan, a 12-year-old orphan and a novice at the Kells monastery. Brendan serves his scowling uncle, Abbot Cellach (voiced by actor Brendan Gleeson), who is determined to protect the residents of Kells from marauding vikings. Cellach's obsession with strengthening the walls has fueled his fears, making him hard-hearted and blind to the purposes of the monastery.

When another monk, the visionary Brother Aidan, arrives (with Pangur Bán!) seeking protection from murderous Norsemen, Cellach overlooks the value of the visitor's cargo. Aidan carries the unfinished Book of Kells, hoping to finish it.

Enraptured by the book's beauty, Brendan disobeys his uncle and runs off into the forest, seeking ingredients for Aidan's radiant inks to enable the book's completion.

Brendan's adventures are animated with such depth and intricacy, you'll swear it's a 3-D production. The film's design honors the Book of Kells itself, employing its rich colors, complex patterns, and dizzying scrollwork in ways that serve the story. You'll see how the Book's artists reconciled motifs from pagan myth and sacred tradition into a stunning whole.

"The film's design honors the Book of Kells itself, employing its rich colors, complex patterns, and dizzying scrollwork in ways that serve the story."

Unfortunately, the filmmakers don't seem interested in the meaning of the Book's text. The Book of Kells illustrates the gospels of Matthew, Mark, Luke, and John with such exquisite beauty that even those who find no merit in its message are astonished. Yet, in the film, no one mentions the Christian gospel. By this omission, the filmmakers miss an opportunity to honor the central purpose of the Book's artists: to preserve and exalt the gospel story. Director Tomm Moore's real interest seems to be celebrating Ireland's art, myth, and history through animation. (His next film, Song of the Sea, is about the mythical Irish creatures called selkies.)

And yet, whatever Moore's intention, Secret celebrates the redemptive power of sacred art that preserves the most powerful light in the world, "a beacon in these dark times." He, like Pangur Bán, is a friend to the monks of Kells whether he knows it or not.

For the "secret" of Kells is really no secret at all.

The Secret of Kells is now available on DVD.