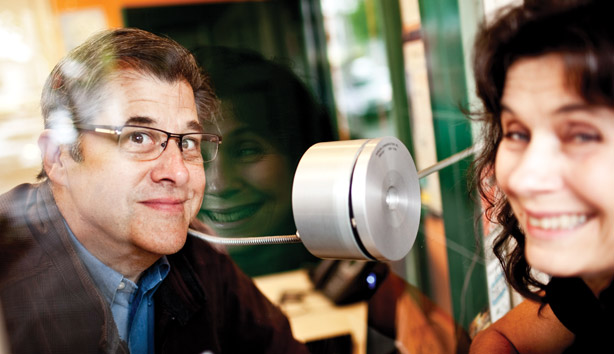 With Taproot Theatre, Scott and Pam Nolte aim to "make people smile, think, cry, and become better people after a couple of hours in the dark."

Before sunrise on October 23, 2009, Scott Nolte '76 awoke to a phone call. "You need to get over here," said Mark Lund, Taproot Theatre's design director. "The Eleanor Roosevelt building is on fire."

Soon Taproot founders Scott and Pam Bailey Nolte '76 were watching as fire destroyed four businesses in the building Taproot owned directly next to the theatre. Smoke ruined most of Taproot's props and costumes, and heat melted box-office computers. The theatre would eventually have to be stripped down to two-by-fours and cement.

Even as the fire blazed, people in the gathering crowd had Taproot's performances in mind. One of the battalion chiefs turned to Scott and told him that he had tickets for that night's performance and didn't want to miss it. 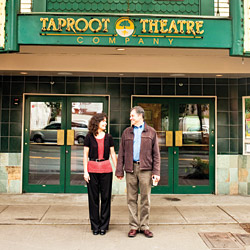 When the Noltes and four other Seattle Pacific University graduates started Taproot in 1977, a Seattle Times reporter described their vision as "a dream which older heads might consider unlikely, if not impossible." But the Noltes' faith — Associate Artistic Director Karen Lund calls it "tenacious insanity" — has kept that dream alive and growing for 34 years.

The dream? A professional-caliber, nonprofit theatre company in Seattle that would offer the city "beauty" and "hope" through on-stage storytelling.

Today Scott is the producing artistic director and Pam the community liaison at Taproot. Because of their visionary partnership, Seattle Pacific University has named the Noltes the 2011 Alumni of the Year, and Scott will direct the spring production of the SPU Theatre Department's 50th season: Our Town.

The couple's "impossible dream" was cultivated at SPU, inspired by the mentorship of the late Professor Emeritus James Chapman, who helped found Seattle Pacific's theatre program and will be honored at a special 50th Anniversary season reception on February 22. He and his students brought plays exploring religious themes into church sanctuaries, and inspired some congregations to start their own theatre programs. "What Chapman did," says Pam, "made churches realize that there really was something in theatre worth listening to."

Married as juniors, Scott and Pam also worked closely with Professor of Theatre George Scranton '68. He remembers the two students knocking on his door late one night to say that his adaptation of The Lion, the Witch and the Wardrobe was simply too long: "You have to cut this," they told him. "And you have to do it by tomorrow."

His ego only slightly bruised, Scranton consented. "It was exactly the right thing to do," he remembers. With the SPU touring group, and later at Taproot, the Noltes performed The Lion more than 100 times.

On spring break a few months before the Noltes graduated from Seattle Pacific with theatre degrees, they began to conceive Taproot in conversations with friends. In a city more enthusiastic about theatre than church, they sensed they could best spark discussions on faith through compelling stories of hope.

More than 60 Seattle Pacific students and alumni have worked on Taproot productions.

Taproot began as a summer touring venture among their group of friends, but Scott and Pam felt called to a long-term commitment. They staged Taproot's first mainstage play, Pilgrim, in Seattle Pacific's McKinley Auditorium in 1979 and served as the University's artists-in- residence until 1982. Moving from SPU to other host venues around Seattle, Taproot became both a resident and a touring theatre company, bringing plays of religious and social significance to churches and schools.

Soon, empty storefronts around them came alive with new businesses. Greenwood's crime rate dropped. Nightlife and traffic improved. Season-ticket subscribers came from 90 miles away. In May 2010, The Seattle Times called Taproot a "creative anchor" of the Greenwood neighborhood.

Taproot's influence continues to spread in Greenwood and beyond through its touring company, and Taproot acting workshops are developing new talent. Even the actors — who represent many different worldviews — are sometimes inspired to new faith. And the "theatre of hope" continues to give opportunities to new generations of SPU dreamers. More than 60 Seattle Pacific students and alumni have worked on Taproot productions. 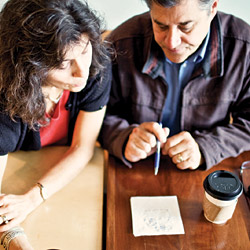 "Scott always had a vision that Taproot would train the next generation of theatre artists," says Mark Oppenlander '94, who has served the theatre as an actor, box office manager, and more. "I certainly think he's realized that."

Taproot's influence brought a community to the rescue after the fire. Gifts and donations poured in from patrons, arts organizations, foundations, and others. Seattle Children's Theatre gave them their largest space in which to finish a sold-out run of Enchanted April.

"What was a disaster in fire turned into a triumph, and a celebration of Taproot's place in our theatre community," says John Bradshaw, managing director of the Seattle Shakespeare Company.

Meanwhile, the Noltes worked to help others. Jim Lustig, owner of Taproot's Greenwood neighbor The Upper Crust Catering, labored alongside Scott on a board managing recovery funds. "Taproot didn't ask for any of that money," he says. "They wanted it to go to people who didn't have insurance, people who had bigger needs than they did."

The theatre's restoration happened in only 96 days — raised from the ashes to full restoration like the phoenix now vividly displayed in a new sidewalk mural. Taproot wrapped up a record-breaking 33rd season in 2009, reaching nearly 30,000 ticket­holders. An adaptation of C.S. Lewis' The Great Divorce, Taproot's first post-fire production, was their most successful show ever. And plans are now in motion for the construction of a new facility to take the place of the burned-down building next door. The new building will house a small theatre and classroom space.

On a sunny May 2010 evening, the Noltes and their cast gathered to rehearse Man of La Mancha, the story of a man driven by a "tenacious insanity" not unlike the Noltes' own ambitious faith.

As lead actor Jeff Berryman sang "To Dream the Impossible Dream," a few people blinked back tears. With the Noltes leading the way, they were inspired to go on offering what the man of La Mancha himself calls "a measure of grace to the world."