For more insights into

good business, visit the Center for Integrity in Business at www.spu.edu/cib to read articles and interviews and to learn about Seattle-area events. Watch Micheal Flaherty's presentations at www.spu.edu/itunes.

Business Another Way of Doing Business 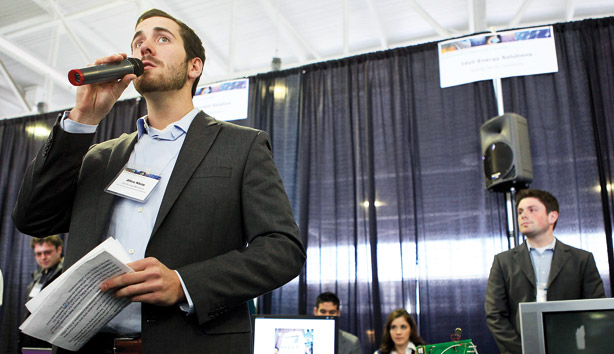 Mark Cotton '10 first realized the impact of vampire energy as an intern at Seattle City Light in 2008.

The Seattle Pacific University electrical engineering major already knew that appliances left plugged in and powered off — from flat screen TVs to toothbrush rechargers — still drain power. But he didn't realize that this wasted "vampire" energy takes an estimated $3 billion bite out of U.S. consumers' wallets each year.

The conventional approach to combating this idle energy thief has been to unplug appliances when they aren't in use, especially before leaving the house or office for extended periods. But unplugging all your devices every time you leave home can be a hassle. "I figured there had to be a better way," says Cotton. "It seemed like a good project to explore in my junior engineering design class."

Cotton worked with fellow engineering students Kathryn Imler '10, senior Daniel Johnson, and senior Pavel Susin to develop a smart power strip that disconnects and restores power to appliances based on movement in a room and the power drain from individual appliances. And the project became an entry in SPU's fourth annual Social Venture Plan Competition held April 2010.

Cotton knew about the competition, but he didn't know how he could be part of it as an engineer. Enter the business students: business majors Jamie Durbin '10 and Winslow Moran-Hodge '10, senior Allen Klein, and economics and philosophy major Kevin McFarland '10.

Klein and McFarland had been on winning teams in previous competitions and joined forces to search for a great product. "The biggest hurdle in the event is finding a good idea," says McFarland.

They knew the power strip, at the time called the "eco-plug," was that idea. But could they win with it?

From motion sensors to market surveys, finicky circuit boards to tricky sales calculations, the challenges they had to solve seemed unending. Both the engineering and business students had to research the power-strip industry, which had scant data available.

For full-time students, hundreds of hours of work under real-world pressures can be daunting. But it's also one of the best experiences Klein says he's gone through during school. "It's a way to push the envelope on what I'm learning in class," he explains. "You really learn your strengths and weaknesses and how to address them."

Their perseverance paid off. With help from visual communication students, the team developed a brand for their device, renamed it the "Switch Strip," and came up with a company name: Idyll Energy Solutions. The team went on to win the $2,500 grand prize and the $500 People's Choice award in the Social Venture Plan Competition.

And the project may keep going. Members of the Idyll Energy Solutions team have started to gather investors to move the product into the marketplace.

Whether consumers will one day be able to vanquish home energy vampires with the Switch Strip is still unknown. But Cotton's summertime idea for a school project has already gone places he never expected. "The project was totally out of scope, but we really enjoyed doing it," Cotton says. "If I didn't, I definitely wouldn't be an engineer."