Off to a Smashing Start 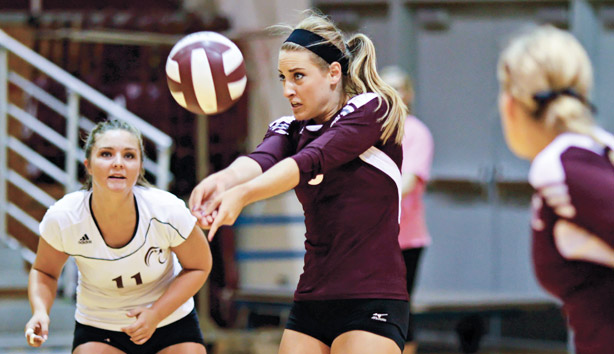 Senior outside hitter Sarah Risser is SPU's leader on offense, averaging about four kills per game.

By midseason, three experienced Seattle Pacific University teams have neared the top of the Great Northwest Athletic Conference standings, while two teams, having graduated some of their most successful athletes, look to younger athletes to move into the limelight.

In the 25th anniversary season of SPU volleyball, Coach Chris Johnson's team started the season red hot — and then got even better. The Falcons' 2010 opener against San Francisco State in the Seawolf Spike tournament turned out to be a tough match. Seattle Pacific escaped that one, 3–2, and proceeded to win all four of its tournament matches, including a sweep of host Sonoma State. The Falcons posted another 4–0 mark in the Hawaii Invitational and have been "lights out" in conference play, winning 24 of 25 games and sweeping seven consecutive opponents, including last year's GNAC champ Alaska Anchorage in Johnson's 100th career victory. It all added up to 16 straight victories to open the season. The team had a 13th-place national ranking and a 20–1 (12–1 GNAC) record by midseason.

The SPU cross-country teams are a little tired of saying goodbye. Five of last year's varsity seven women graduated, and the men's team also lost its most experienced runner. Still, at midseason the women were within striking distance of qualifying for nationals, and the men had turned in some impressive performances, including a team win in the short-course event at the Fairbanks Invitational.

With seven freshmen joining the women's team in 2010, everyone's asking "Who will step up?" The answer is Allison Cutting, a state Class 2A champion in high school. Cutting has already won the Apple Ridge Run Invitational, and was the team's top finisher at both the Sundodger and Bowles Invitational meets.

The Falcon men got off to a slow start in 2010, following up a scoreless tie with four consecutive losses, to tough non-conference opponents. But they looked a lot better in early GNAC play (5–1–1), including an impressive road victory over defending champ St. Martin's, and that was good enough for the second-place spot in the conference at midseason. With junior Tyler Schultz and senior Andy Wolverton leading the attack, Coach Mark Collings' squad has a solid chance to improve on last year's third-place GNAC finish (4–3–1).

As the defending conference champions, the Falcons were in familiar territory atop the GNAC at midseason, ranked 13th nationally with a 12–1–2 (9–1–1 GNAC) record. Their sole loss, to conference foe Western Washington, came on September 30. The game's only goal in the 89th minute was just the third all season against senior goalkeeper Maddie Dickinson — who bounced back two days later to establish a new SPU career record with her 26th shutout.

Although the Falcons are meeting expectations thus far, they still have something to prove. Last season they failed to defend their national crown, faltering against Chico State in the first round of the playoffs. This year, you can bet they'll be looking for redemption come playoff time.