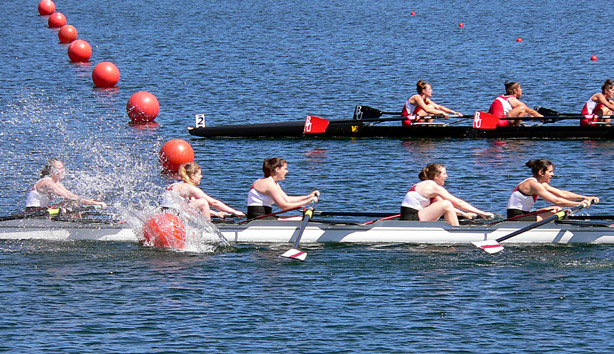 The Falcons had the smallest contingent at the NCAA rowing championships, with only one alternate, but captured the second-place trophy.

Buoyed by a high-water mark in women's crew, dominance in the Great Northwest Athletic Conference and strong performances across the board, the Seattle Pacific University Falcons ended the 2009–10 campaign ranked in the top 25 athletic programs of NCAA Division II.

With the end of the 2010 track and field season concluded the SPU careers of a remarkable group of senior women, led by Jessica Pixler, the most-decorated Falcon ever. While those seniors' spikes will be hard to fill, the team displayed depth and balance, and looks forward to continued success under Coach Karl Lerum.

In May, the Falcon women won the GNAC championship meet with the third-highest total score in school history. And at May's national championships in Charlotte, North Carolina, three athletes claimed All-America honors: Pixler, with a victory in the 1,500 meters; junior Brittany Aanstad, who placed fourth in javelin; and senior Lisa Anderberg, with an eighth-place finish in the 800 meters.

Only their achievements in the classroom could match their performance on the track. Seniors Anderberg, Pixler, Jane Larson, and Suzie Strickler earned NCAA postgraduate scholarships and were named to the Academic All-District team. Joining them on that team were senior Chad Meis and sophomore Natty Plunkett.

Laurel Tindall completed her 35th year as head coach by returning her team to the USGA national championship meet in Denton, Texas. At the meet, sophomore Kaysha Heck won a silver medal on the bars, while junior Anissa Madrid was eighth in the all-around and captured silver on the balance beam.

Over the past 32 years, Falcon crews have hauled in 40 medals, including national titles. Yet SPU had never gathered enough points in a single regatta to qualify for an NCAA team trophy. That changed at this year's Division II national tournament on Lake Natoma near Rancho Cordova, California. Solid performances by both the women's four and eight earned the Falcons the second-place trophy — a handsome piece of hardware that stands as the first of its kind in team history.

On the men's side, with only nine rowers and a coxswain, Coach Keith Jefferson had just about every athlete pulling double or triple duty. This year's novice four completed a season sweep — winning all four events they entered and taking silver in the Northwest Collegiate Rowing Conference varsity four event.