Young Alumnus of the Year Honored at the White House

Gravity on the Rise 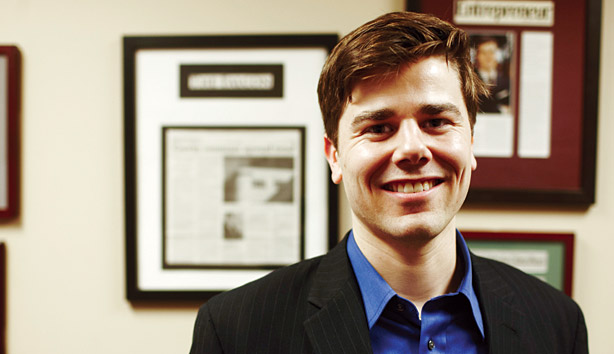 Dan Price began his entrepreneurial rise as manager and bassist for his high school band, Straightforward.

When you've been featured or quoted in BusinessWeek, Entrepreneur, and Forbes magazines after just a handful of years in business, your business model is probably working as planned. Dan Price '08, whose Gravity Payments is the largest credit card processor in the Pacific Northwest, is in such an envious position. He is Gravity's CEO, and in May he was named the Small Business Administration's National Young Entrepreneur for 2010. He is also Seattle Pacific University's 2011 Young Alumnus of the Year.

As part of the annual observance of National Small Business Week, Dan, 25, was honored in Washington, D.C. He met with President Barack Obama and briefly discussed with him challenges and incentives for small businesses.

Dan and 12 other honorees earned recognition because they "foster an environment where the spirit of entrepreneurship can flourish, resulting in growth and job creation," according to the SBA's administrator, Karen Mills.

"At Seattle Pacific, Dan was not only a student who sang in the choir and went to business classes, but he was also an entrepreneur — and an incredible one at that," says Chris Sharpe '06, a former floor mate of Dan's who now works in marketing and business development at SubSplash. Dan won the 2007 School of Business and Economics Best Business Plan award.

Gravity Payments has grown 100 percent each year since its 2004 found-ing, when Dan Price made calls to prospective customers from his dorm room.

When Dan was a freshman at SPU, he and his brother, Lucas, used their savings to start Gravity Payments, whose niche is to provide an efficient and inexpensive way for small businesses to process credit-card payments. Gravity has grown 100 percent each year since its 2004 founding, when Dan made calls to prospective customers from his dorm room.

For someone so recently a student, there is another statistic perhaps even more significant. After putting most of his earnings back into the company, Dan has already paid off more than 75 percent of his student loans.

Today a staff of 40 serves thousands of business customers coast-to-coast. Gravity strives to pay employees well and be upfront and transparent with customers. "We disclose our costs and how much is going to us to do the actual processing," says the CEO.

Dan lives in Seattle with his wife, Kristie Lewellyn Price '08, a massage therapist. They attend Phinney Ridge Lutheran Church, where she volunteers in the food bank and he served on the church council as the treasurer. Dan also gives back through business: Gravity donates 10 percent of company profits to charitable causes.

One of the more direct assessments of the Gravity CEO came from a writer for Seattle Business Monthly who in 2008 not only underscored how Dan goes the extra mile for his customers but also called him "disturbingly young."

Despite the recent recognition from the White House, that leaves this young grad plenty of room for still more growth.