How to Create a Character Onscreen 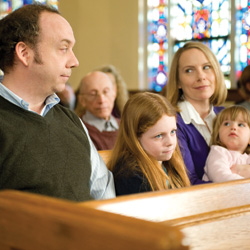 If I believe in the characters, a story will get me hooked.

Once I have an idea of who a character is, I try to remain as true to the qualities of that character as I can without feeling like I have to engineer or manufacture characteristics for an audience's enjoyment. If the characters are true to the world that they're existing in, then the audience will go just about anywhere with them.

Casting the right actor is a huge part of it. I look like a good writer because I'm very good at casting. Actors elevate my material. For instance, what makes Paul Giamatti so compelling as an actor, especially in a movie like Win Win where he's really quite restrained, is that he's so focused on realizing the potential and the limitations of that character, and exposing them. That's all he's concerned about. There's something incredibly compelling to watch in that. He's never caring much about the audience's perception. He's much more concerned about realizing the character.

That's why I take my time with the characters. I want to settle down and get to know these people before we take them on a ride – even if that means my plot is slow to develop. At least I know that when I go, you'll come with us.


Tom McCarthy is a director and screenwriter of the films Win Win, The Visitor, and The Station Agent. He was also an actor in the television series The Wire.

Read Response Contributing Editor Jeffrey Overstreet's interview with Tom McCarthy, from which these comments are excerpted.