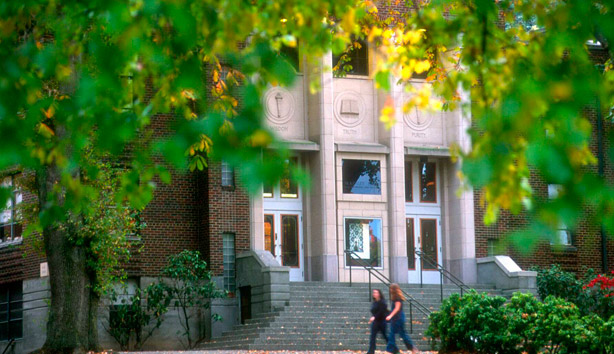 What are your memories of SPU’s 50th Anniversary Homecoming reception?

Danny Walter ’93: I had a great time at the Homecoming reception. I saw so many people I hadn't seen in almost 20 years. I loved the slide show, seeing pictures of so many shows I was a part of as student and alum. I was also great to see that video about Chaps (late Professor of Theatre James Chapman) again. I really miss him.

Mark Oppenlander ’94: I enjoyed the 50th anniversary reception more than I expected. It was great to see a number of faces from the past –– people I knew from SPU student days but also people I worked with at Taproot, many of whom I had not see in quite some time. Other than reconnecting with old friends, the most memorable part of the reception was probably the tribute to James Chapman. Chaps really was the driving force that put the SPU theatre program on the map.

The alumni who attended the event really seemed to enjoy seeing each other again. Why is that? Is there a special kind of connection between theatre alums?

DW: I think theatre alums continue to have a strong connection because we did more than take classes together; we got to be a part of some amazing productions. We helped build the sets, put together costumes, hang lights, and be actors, directors, and writers too. It was wonderful to see so many professors and alums I had learned from and worked alongside to make those plays come together.

MO: I think that people who do theatrical productions together form a special bond. The experience of intimate community that is developed during the intense and often emotional process of putting on a play is unlike anything else I have ever experienced. The camaraderie and kinship developed turns the cast and crew of a play into a small family of sorts.

What did you think of this year’s production of Godspell? What do you remember about being in SPU’s 1993 production?

DW: It was fun to see Godspell again. What a great show that can be re-imagined in so many different ways. I remember being in the '93 production and having so much fun climbing around on Don's (Professor of Theatre Don Yanik) set, made to look like a Seattle back alley with three giant telephone poles, and a smashed up VW bug.

When SPU’s Theatre Department was founded, theatre was not well-accepted in the church. Do you feel a sense of pride in what the department and its alumni have accomplished in 50 years?

MO: I think that the SPU Theatre Department has been at the forefront of bridging the gap between the church and the theatrical art form. We didn't have the language of "engaging the culture and changing the world" back when I was a student, but it was what we were doing nonetheless. I am proud to be part of this heritage –– a department and a school that has been a leader in discerning how Christians who are serious about theatre might be taken seriously, both in the church and in the broader artistic community.

What are your memories of SPU's theatre program? Share them here in this moderated board.