A Conversation With Tavis Smiley 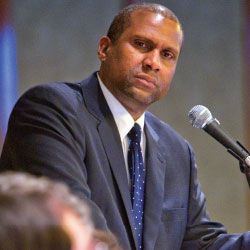 Host of both the late-night public television talk show Tavis Smiley on PBS and The Tavis Smiley Show on Public Radio International, Smiley is the author of 14 books, including his memoir, What I Know for Sure: My Story of Growing Up in America (Doubleday, 2006).

You’ve been talking with a lot of education leaders around the country on your shows. The conversation around education reform is very complex. What do you believe is at the heart of this discussion?

Without going much deeper into it, at the heart of what I’m going to talk about is this notion of the lack of love in our public discourse. In our public discourse about education there is a lack of love. If you define love as I just did, then what do we do vis-à-vis our public policy? That gives children resources all across this country, again, not because of what county they live in, not because of what state they live in, not because of who they know and how they got access to get in to a certain school, or not even because they won some lottery to get into a school, as the documentary Waiting for Superman pointed out clearly. I think what’s lacking in this conversation is love for the children described as, defined as, every one of them being worthy. If we could start at that point, then it changes the whole conversation about education.

I think Americans at their best, some of our greatest Americans were able to put love at the epicenter of the public discourse, in the middle of the public square. I’m talking now about Dr. King. I’m talking now about Robert Kennedy. I could do a long list of these people, but that’s what’s missing in this conversation: an accurate and implementable and actionable definition of what it is that we say when we say that we love our children. Every president, every governor says that they want to be the education president or governor. Everybody professes to love children. Well, what is our operational definition of that? How do we actualize that? That’s what I hope to get into.

There seems to be a common assumption that K–12 education is in crisis in America today. Do you think we are really in a crisis? And if so, what are some indicators of that?

What kinds of things will need to change so that all kids in America can have access to good education and become college-bound and career-bound?

It takes a while to build this, so it’s not so easily defined in a simple conversation. But it starts with changing expectation and changing our definitions. The definitions of whether or not we truly love these children and truly care for them — we’re giving a lot of lip service to that. The Obama Administration, for example, their answer to the education crisis is “Race to the Top.” I don’t think that education ought to be a race. I think education ought to be a right. It’s not a race, it’s a right. It’s not about competing for resources. I understand what their effort is all about, but for me it’s not about having to compete. Education ought to be a right, it ought not to be a race. I have a problem with the terms. I have a problem with how we define these terms. So the definitions need to be adjusted, they need to be shifted, and then our expectations need to be shifted.

In your discussions with education leaders, what has stood out to you about successful schools?

There are all kinds of examples. The Urban Prep Academy in Chicago for the second year in a row has sent 100 percent of its graduating class of seniors, mostly African-American males, to college. Urban Prep is sending kids to college at 100 percent every year for two straight years. Of course, everybody knows Geoffrey Canada and the Harlem Children’s Zone.

And in these institutions where we see it is working, I can tell you this: It starts with teachers and administrators who believe that these kids are capable of learning, who believe that these kids can succeed combined with giving them the resources to do that. First, you start with the belief that they can succeed, that they can learn, that they can lead. Second, you give them the resources, and third, I don’t care whether the school is public or private, the schools in this country that do best are the schools where parents are involved. You have to have resources, you have to have teachers and administrators who believe in these kids, and you have to have parents who are involved. If you can put those three things together as many schools have, then you have a chance at making it work.

Seattle Pacific has been educating teachers for more than 90 years. What advice would you give to college students who are training to become teachers?

"Nothing less than our
democracy is at stake when it comes to whether or not we are going to get serious about reforming
education."

The short answer is that teaching ought not to be seen as a stepping stone. There are too many surveys and polls that I’ve read over the years that a lot of these young teachers who are going into the classroom don’t really stick it out. They go in for a couple years, it’s the first job out of college, so they need a job, and it’s always good to say on your résumé that you were a schoolteacher.

I’m not demeaning anybody who goes into teaching, I’m just saying there are too many examples, I believe, of people who go into the field who aren’t really committed to it. It’s not really their calling. It’s not really their vocation. They don’t really see it as their purpose in life. They’re lacking a particular and a peculiar kind of love for these children. So the advice I would give is that our children are too precious and your time is too valuable to waste it doing something that really isn’t your calling. If this is just a means to an end, if it’s just a stepping stone, get out the way, and let someone do this who really want to do it, who really feels it, who really loves these babies.

A lot of these SPU students would say that teaching is their calling. What would you say to them?

We see that unequal opportunities in our schools also seem to be tied to broader injustices, such as poverty and racial discrimination. How do you think these inequities can be eliminated through access to better education?

Education, as Malcolm X once said, is our passport to the future. Tomorrow belongs to those who prepare for it today. Education can advance you and a lack thereof can hold you back. Beyond doing their absolute level best to make sure these kids are educated, educators have got to be more vocal.

This is a fight for the future of this country, this fight to reform education. If we think we can keep dumbing down generation after generation of American children, one day we are going to pay a very hefty price for that. Nothing less than our democracy is at stake when it comes to whether or not we are going to get serious about reforming education.

Every day teachers are giving homework assignments to kids. As adults, we have to give ourselves a homework assignment. We have to assign ourselves to be the voice for these children. It’s not just about going into the profession, just about teaching, but it’s about using our voices, raising those voices, lifting every voice, on behalf of these children.

Some of the measures that indicate the U.S. school system is failing are based on standardized test scores. Kids are being tested more and more. How is all of this testing affecting student learning?

Obviously there’s great debate about that, and there’s no universal opinion about that particular issue. If you’re asking me my opinion, I think that we are teaching to the test. And for me, that’s not what education is all about. Testing has a place in education. We want to have some sense of what you’ve learned and how well you’ve learned it. But I just find that we’re putting too great an emphasis, for my taste at least, on testing.

If my test scores were determinative or demonstrative of my capacity to be a successful American citizen, then I would have been discarded and disregarded a long time ago. I was not, have never been, a good test taker. If taking a test was going to be the determining or demonstrative factor about whether or not I was ready for the world, ready to make my way in the world, then I would have been held back. I think we’re overemphasizing that, and there are other ways. Testing does have a place, but putting too heavy and too great an emphasis on it, I think there are other ways to determine whether or not these kids are learning.

How can we, the public, know whether our money is being used for effective education?

I think there are always examples of superintendents and chancellors who have questions raised about propriety, about priorities, about agendas. Those questions are always going to be raised because as humans, we are not human and divine, we are just human, so we are imperfect. I’m not so concerned with an example here and there of people who have lost trust with constituents as much as I’m concerned about focusing on the people who are doing the right thing.

To put it another way, I think there are many more educators who are doing it right than there are those who are doing it wrong. Trustworthiness is earned and evidenced by the job they’re doing educating the children. Does the evidence suggest that the kids are learning? Are they earning the trust of the people? Trust isn’t given, as far as I’m concerned. Trust has to be earned.

I think it starts with putting people in who are in for the right reasons. Oftentimes, these positions are political appointees and sometimes they’re elections. It all depends on what state and what county you’re in. So sometimes folks are elected, sometimes they’re appointed, sometimes there are politics involved and so often you end up having people who are in charge who quite frankly, and pardon my English, ain’t got no business being in charge. So that happens from time to time, but I think a lot of administrators and teachers really do care about the future of these children and are doing their best against all the odds every day.

You cover a lot of hot topics in your TV and radio shows. Why is the issue of education important to you?

I don’t believe there is any issue, not a single issue, that is more determinative of the future of this democracy than the issue of education. Without an education, in today’s world, these young folks are twice defeated. They’re defeated once because they go through the world ignorant. And they’re twice defeated, because out of a quality education springs forth so many other opportunities.

There’s nothing worse than walking around for your entire life being uneducated, illiterate, and ignorant, and on top of that, you hurt yourself in every other way: financially, sociologically, culturally. Education is just the key that unlocks so many doors.

A Conversation With David Brooks

A Conversation With Diane Ravitch