During Winter Quarter 2012, Assistant Professor of Biblical Studies Laura Sweat is guiding readers through this gospel at spu.edu/lectio.

Evangelist in the Spotlight 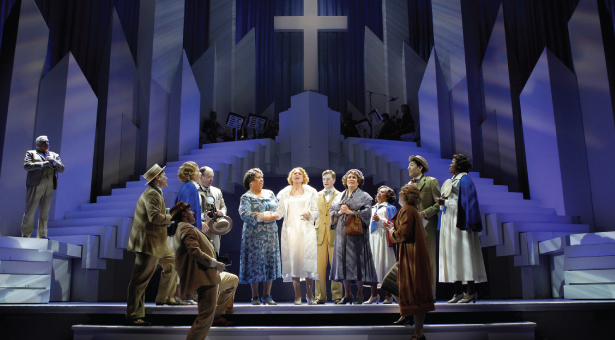 The set of Saving Aimee was a replica of Aimee Semple McPherson's pulpit and stage in Los Angeles.

Billboards around the Seattle area for Saving Aimee, a musical based on the life of evangelist Aimee Semple McPherson posed this question: "Saint or Sinner?"

But, says Priscilla Pope-Levison, professor of theology and assistant director of women's studies at Seattle Pacific University, it's not the right question to ask about this complex historical figure. "If we take her whole theology, that we are sinners saved by grace, then you're always both. She did a lot of good, but she was a very flawed person."

When the musical made its West Coast premiere at Seattle's Fifth Avenue Theatre in autumn of 2011, the theatre invited Pope-Levison to give a series of pre-show talks. She spoke to approximately 150 theatregoers over three nights about Aimee Semple McPherson and other prominent women evangelists in American history.

The life of a Christian evangelist may seem like an unusual subject for musical theatre. But in the case of Aimee Semple McPherson, maybe it's not such a stretch.

"She was very much influenced by the rise of Hollywood," says Pope-Levison. "There was just this star quality about her, and she used pageantry and parades — they were front and center in ministry."

McPherson made headlines throughout her life. Her church, Angelus Temple, had the largest dome in the world — and floats in the Rose Parade. She hired Hollywood actors to portray Bible characters in her "illustrated sermons." She started the nation's first Christian radio station and founded a denomination, the Church of the Foursquare Gospel, that is still going strong today with 5 million members worldwide. Her church fed thousands during the Great Depression.

Yet her personal life was fraught with conflict. Married three times, McPherson defied her parents' wishes to go into ministry and was estranged from nearly all her family by the time she died. Her controversial disappearance in 1927 — during which she claimed to have been kidnapped and others argued she'd run off with a lover — provides a frame for the musical, Saving Aimee.

Onstage, Broadway actress Carolee Carmelo portrayed McPherson as a vibrant, impassioned believer who feels a strong call to preach the word. Saving Aimee narrates the events of her turbulent life, sometimes compressing the storyline, though remaining mostly accurate. Even the set is a replica of Angelus Temple.

"There was so much conflict that surrounded her life and her work; I really felt that was represented well," says Pope-Levison. Seattle's Fifth Avenue Theatre often plays host to new musicals that are headed for Broadway, so it's possible Saving Aimee (which closed in October 2011) could make the same cross-country trek.

But regardless of whether the show heads to New York, the story of Aimee Semple McPherson's life raises important questions about faith, integrity, and evangelism for Christians today.

"God certainly worked through her, but she also made some serious mistakes," says Pope-Levison, who notes parallels between McPherson's life story and the lives of other prominent Christians with highly publicized personal failings.

"It is striking to me that so many evangelists have succumbed to temptations," she adds, "but I believe God works through our sinfulness."