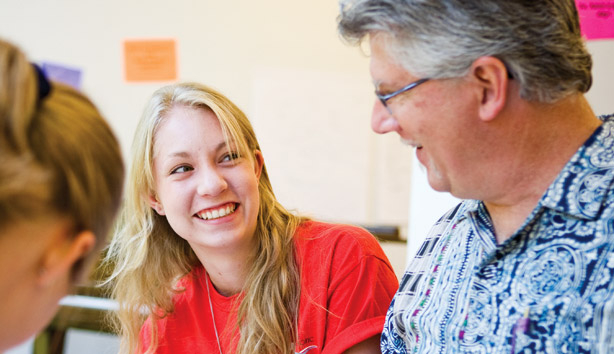 David Kronbach (right) says interaction with MKs is rich because they are "world citizens."

Sons and daughters of American missionaries serving around the globe often uproot from family and the familiarity of the culture in which they've been raised to return to a society of which they have little or no memory.

Janet Nyland Kronbach '82 and David Kronbach '85, who served as missionaries for six years in West Africa, want to ease that transition. They have teamed with Barnabas International, an organization committed to the encouragement of missionary families, to spearhead the annual summer MK Transition Seminar.

"I'm learning to trust God with my life," says Elena Raney, an SPU freshman, about the process of separating from the country and culture where she grew up.

For two weeks in July 2010, 18 missionary kids, or MKs, from more than a dozen nations, lived in Moyer Hall at Seattle Pacific University. They learned how to make the transition from life in another culture, or even several cultures, to life in North America as a young adult. Among their challenges were acquiring skills as basic as obtaining a driver's license or learning to load a dishwasher.

For some, like Elena Raney from Papua, Indonesia, who this year entered SPU to major in nursing, the challenges are more often issues of the heart. She sought guidance in coping with the grieving process of separating from the country and culture where she grew up. "I'm learning to trust God more in my life," she says.

Christopher Di Trolio of Argentina, who plans to major in political science at another university, enjoyed hearing stories from his counselors who were once in the same position. "They made the transition OK, and I found that very comforting."