Renewing University Campuses One Student at a Time 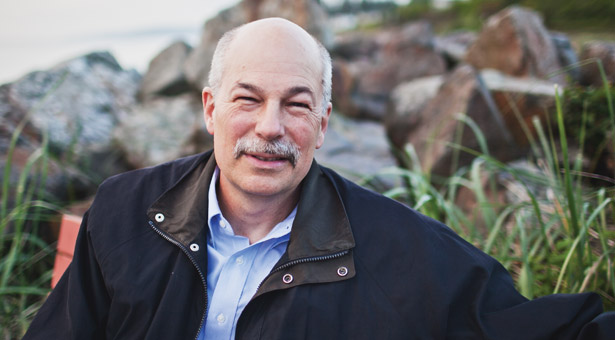 Alumnus of the Year Alec Hill's recent reading diet included finishing War and Peace and a study of the life of President Theodore Roosevelt.

Alec Hill '75, president of InterVarsity Christian Fellowship, is passionate about students. He loves to see them wrestle with the answers to two life-altering questions: "What are my central beliefs? How do I want to live out those beliefs?"

The impact of InterVarsity's ministry — which nurtures "witnessing communities" of students and faculty — can be enormous. Timothy Keller was a student at Pennsylvania's Bucknell University when he became a Christian after interacting with InterVarsity students and staff. His own ministry experience began with three years as an InterVarsity staff member in Boston.

Keller went on to found a church of more than 4,500 — Redeemer Presbyterian Church in New York City — and to build a fertile teaching ministry that reaches a nationwide audience.

"Like the law and media," says Alec, Seattle Pacific University's 2012 Alumnus of the Year, "the university is one of the great culture changers in the world." The knowledge that InterVarsity's 866 chapters have "extraordinary potential" for influence daily fires his passion as president and CEO.

InterVarsity provides spiritual support and "discipleship of the mind" for nearly 36,000 students and more than 1,500 faculty participants on campuses coast to coast. Alumni include International Justice Mission President Gary Haugen, writer Dallas Willard, and the governors of Louisiana and Tennessee.

Alec has held the top post at InterVarsity for 10 years, setting direction, inspiring staff, working with seven vice presidents and the board of trustees, raising funds, and listening and responding to the ministry's several constituencies.

"At InterVarsity, we want to see campuses renewed, not just individuals redeemed," he says. That means taking on the tough social issues of the day, and sometimes bearing the brunt of them. In recent years, some universities have restricted campus organizations such as InterVarsity because of their insistence that their chapter leaders be students of faith.

"It's a very live issue," says Alec, who holds a degree from the University of Washington School of Law. He works with pro bono Christian legal services to defend InterVarsity's rights. It was, he says, "remarkably helpful" while at SPU to co-author with attorney Chi-Dooh "Skip" Li '66 a half dozen articles on First Amendment issues.

Alec taught his first business course on the SPU campus in 1980. In 1985, Joe Hope, then dean of the new School of Business and Economics, recruited him to teach full time. "The answer isn't as important as your logic," Alec told his students, and showed them how to analyze hypothetical legal scenarios from all sides. In 1988, students named him Professor of the Year.

"While Alec was at Seattle Pacific, he had a tremendous impact on so many students, faculty colleagues, and the broader Seattle business community," says SPU President Philip Eaton. "I am very proud that we can honor Alec in this way."

Alec went on to earn a master's degree in biblical studies from Seattle Pacific in 1993.
By 1995, he was appointed dean of SBE. During his tenure, SBE attained accreditation by AACSB, the international association of management education, an honor currently held by only 5 percent of business schools globally. In 2001, InterVarsity recruited him.

As a high school Young Life leader for three years and a World Relief regional director for five years, Alec understands nonprofits and how to get things done. His most prayerful challenge as InterVarsity's CEO? "Different management situations can show up your weaknesses," he confesses. "But I have to remember that I play only before an audience of One. I get to experience a lot of grace."

Today, in addition to leading InterVarsity, Alec serves on the board of Christianity Today International. The book he published while at SPU, Just Business: Christian Ethics in the Marketplace (InterVarsity Academic, 1997), has been printed in five languages, including Chinese.

Rob McKenna '90, M.B.A. '92, associate professor and chair of industrial/organizational psychology at Seattle Pacific, has known Alec as professor, softball teammate, friend, and mentor for 20 years. "He ran class like law school," he recalls. "You had to be prepared to answer the toughest questions. He was hard on you, but he made you want to do your best."

Young Alec grew up in Seattle only a few blocks away from Mary, his wife of 33 years. He admires her for raising their two accomplished daughters, Laura and Carolyn, and for being a CPA and a select member of the National Watercolor Society. She's also a 2003 graduate of SPU's M.B.A. program. "You ask who I talk to when the way is difficult? I talk to Mary."

He draws strength from the family's Evangelical Free Church in Madison, Wisconsin, and is very close to his pastor. A "pretty strict Sabbatarian," Alec's no-work-on-Sundays discipline extends even to email, with which he will not engage except in an emergency.

"From my perspective visiting universities around the nation, Seattle Pacific is a gem of a school," says the Alumnus of the Year. "It teaches community influence; its emphasis on the character of the educated person is unusual in the academic world; and it has an excellent faculty. I think the best days of SPU are ahead."