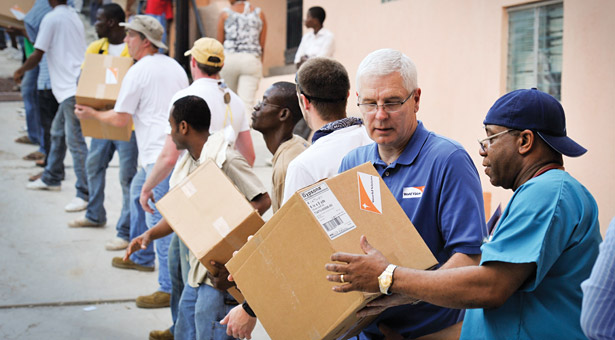 What does the Kingdom of God have to say about the disparity between rich and poor in our world?

Inspired by Stearns’ best-seller, The Hole in Our Gospel, 2010 Christian Book of the Year, the conference was presented by SPU’s Center for Biblical and Theological Education.

Stearns, who is a member of Seattle Pacific’s board of trustees, and Steve Haas, World Vision’s vice president and chief catalyst, brought a message and vision of gospel “wholeness” to pastors and other church leaders, as well as faculty, staff, and students, and members of the greater Seattle community and beyond.

“It’s about living out the gospel wherever you are planted,” said Stearns. “In the economy of heaven, planting tomatoes for a widow is just as singular an achievement as drilling wells in Africa or fighting the AIDS pandemic.”

Quoting Willow Creek Community Church co-founder Lynne can respond to every need. But we can — and must — earnestly pray, ‘God, what is mine to do?’”

Jan Pendergrass, pastor for children and families at First Free Methodist Church, who attended the conference, says, “We church staff folks are faced with the tyranny of the Sunday urgency every week and feel we are barely prepared to meet the responsibilities of our own community, let alone the weight of the world. But the ‘What is mine to do?’ question was a quote to treasure.”

During morning chapel, Haas spoke of the need for Christians to have a “right-ordered heart,” and
exhorted the several hundred in attendance to act out their faith. “The world we live in is under
siege,” he said. “Three billion are desperately poor, one billion are hungry, millions are trafficked in human slavery, 10 million children die needlessly each year, wars and conflicts are wreaking
havoc, pandemic diseases are spreading, ethnic hatred is flaming, and terrorism is growing.
And in the midst of this stands the church of Jesus Christ in America, with resources, knowledge,
and tools unequaled in the history of Christendom. I believe that we stand on the brink of a defining moment. We have a choice to make.”

“I was impressed by the uncompromising message on issues of social justice,” says George Mitrovich, president of the City Club of San Diego and member of the Seattle Pacific Seminary Advisory Council, who attended the conference. “A gospel that doesn’t address poverty and wage inequity, race and gender discrimination is a false gospel.”

Reflecting on the conference, CBTE Director Celeste Cranston says, “It was an opportunity to consider deeply what it means to live out the gospel in every part of our lives and with all God’s people, and to acknowledge our tendencies to ignore care for the poor and for those who are outside our comfortable bubble.”