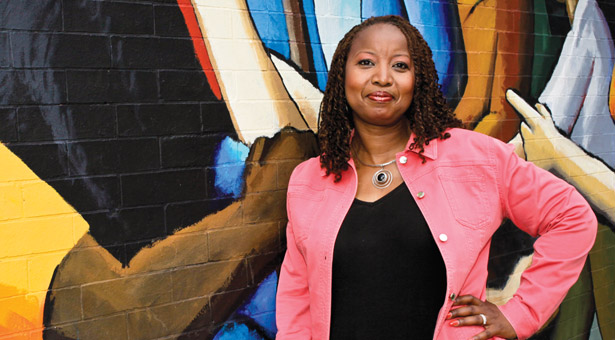 After 20 years of being based in Chicago, reconciliation leader Brenda Salter McNeil moved to Seattle to join the SPU faculty this fall.

Brenda Salter McNeil has advice for anyone serving in a city: “Begin by acknowledging there are things we need to learn and to understand,” says the new Seattle Pacific University associate professor of reconciliation studies. “Then sit at the feet of indigenous leaders and learn from them. That requires leaving our comfort zones and going to places where we are not in charge. I learn from you and you learn from me, and we are both very different people at the end of our journey together.”

McNeil, author of books such as A Credible Witness: Reflections on Power, Evangelism, and Race, is also a popular speaker at Christian conferences, churches, and universities nationwide. “She spoke at SPU’s chapel when I worked for Campus Ministries,” remembers Tali Hairston, director of SPU’s John Perkins Center for Reconciliation, Leadership Training, and Community Development. “The students were talking about her for weeks.”

Now returning to Seattle Pacific and joining the faculty in September, McNeil will continue to work with students. While on staff with InterVarsity Christian Fellowship at Occidental College in the early 1990s, she had noticed students of color rarely participated in the ministry’s events. But having become a Christian while a student at Rutgers University, she knew the college years can be a spiritually life-changing time.

“I began having a real sense of burden for those students,” she says. “I began reaching out to those students, and that launched me into reconciliation without knowing it. I began to preach about multiethnic ministry as I became more well known as a speaker on college campuses.”

At Seattle Pacific, McNeil continues to reach out to college students in her new role as director of the School of Theology’s newest minor, reconciliation studies. “Because of her training, ministry, and education, it is really most fitting that her academic home be SPU’s School of Theology,” says Doug Strong, the school’s dean, adding that her addition sends a strong message that Seattle Pacific is committed to racial and ethnic reconciliation. “She’ll be a catalytic agent for encouraging further growth in what we have already done.”

Adds Kerry Dearborn, professor of theological studies, “Welcoming Brenda to SPU and to be the director of our reconciliation studies program is an immense gift and answer to prayer. She has a wealth of experience and knowledge in this area.”

Raised in Trenton, New Jersey, McNeil was the second of four children. She earned a bachelor’s degree from Rutgers University, a master’s of divinity from Fuller Theological Seminary, and a doctorate of ministry from Eastern Baptist Theological Seminary.

While at Fuller, she met reconciliation advocate John Perkins, who became a mentor and remains a friend. Her ministry still echoes his approach.

After her time with InterVarsity, McNeil started the nonprofit Overflow Ministries Inc. In 2005, she founded Salter McNeil and Associates, a consulting and leadership development company based in Chicago. Then in 2010, her husband, J. Derek McNeil, became vice president of academic affairs at the Seattle School of Theology and Psychology. By the summer of 2011, the family — including a 15-year-old daughter and 21-year-old son who attends Azusa Pacific University — had traded the Windy City for Seattle.

Now that she’s on campus, students are energized to learn from her experience. “It’s easy to have a disconnect between scholarship and action,” says senior Tyler Scott, a political science major, minoring in reconciliation studies. “I think Dr. Salter McNeil is really going to bring those together.”