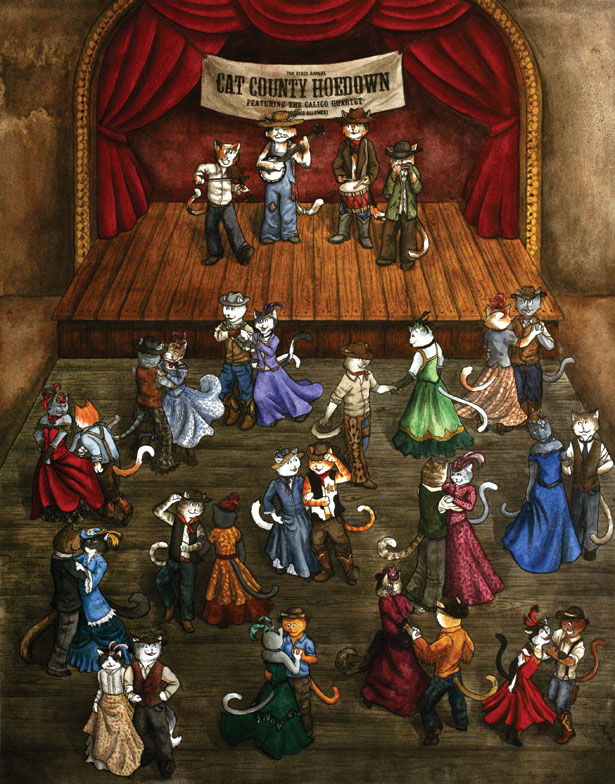 Where do cats go when they leave the house? "They go dancing, of course!" says Jessica Innes Vanderpol '11.

For her senior show, "Unbound," in May 2011, the illustration and new pictures major created a set of interrelated, wordless stories. "Cat County Hoedown" is the colorful centerpiece of a story, told through comic-book-style panels, about an ordinary housecat who escapes into a gunslinging Old West, entirely populated by cats.

Putting the show together took three months. But the seed of a story about cowboy cats has been in her mind since third grade, when her childhood cat, Mister Sir Hopkins, came back from a cat fight looking a little worse for the wear.

"I feel like cats have the capacity for curiosity," she says.

Vanderpol's own curiosity about storytelling led her into Seattle Pacific University's visual arts program. Though she majored in exercise science for two years, she says the switch to the arts gave her the tools to tell the stories she'd always dreamed up.

"In becoming swept away by a story, we open our minds to learning and avoid growing narrow-minded or closed off to the question: What if?" she wrote in her artist's statement for the show.

Since graduation, Vanderpol has moved to Columbia, South Carolina, where her husband, Cody Vanderpol '09, is stationed with the Air Force (the two met swing-dancing in Tiffany Loop). Meanwhile, she's working on refining her painting technique by creating a children's book, Lily's Garden, another cat story.